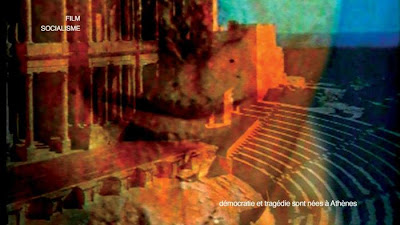 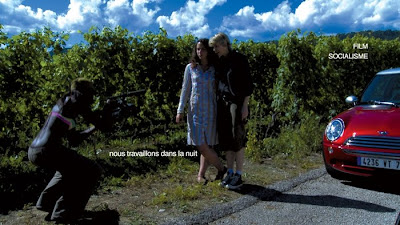 Jean-Luc Godard’s Film Socialisme recently happened to me. Happen is the right word not only because its robust and fractious sparring of image and sound pummeled me into a state of docile bliss, but also because my general ignorance of the latter half of the director’s career stranded me out at sea (quite literally) in what has clearly been a lifelong drift into a very specific philosophical framework, a set of signature themes and motifs that I have simply not followed. Even then, judging by the plethora of responses from seasoned Godard followers, Film Socialisme is a unanimously demanding, dense piece of filmmaking. Every time I sense myself getting a grasp on one of the many political, philosophical, metaphysical, or socio-cultural insights Godard offers up, it slips from my mind, getting swallowed up by the frenzied mixture of ideas. As such, I can only approach this delirious film in fragments of thought, and a proper, coherent essay will have to come much later after plenty of viewings.

1.) Before Godard dives into any of his more complex musings, the film’s deeply strange image-sound relationship asserts itself. At 81, Godard is now utilizing with unapologetic force techniques that would pass off as the very primitive failings of a young, first-time filmmaker. In the first of Film Socialisme’s three sections - which possibly aims to evoke a 21st century Noah’s Ark - the images are capturing with varying formats and levels of fidelity: crisp, sterile HD, muddy prosumer cameras, and even what appears to be intensely distorted cellphone footage. Further fraying the mise-en-scene is Godard’s soundtrack, which is probably his most daring invention: offscreen voices compete with each other in the left and right speakers, their entrances and exits not alleviated by fade-ins and fade-outs, all while crunchy environmental sounds caught by low-quality microphones and non-diegetic snippets of melodramatic music (shades of Contempt) fill out the mix. It's destabilizing and ugly, and there's no reason why it should possess such unlikely beauty at times, but it does. It's also the initial hint towards Godard's attempt to understand and reflect the technological anarchy of the contemporary world.

2.) The film harbors a complicated relationship with time and history. The cruisers in the first section are sightseeing Barcelona, Palestine, Egypt, and Naples, among other European and Middle Eastern territories with particularly turbulent histories that have been represented time and again through images. In approximating the surfaces and textures of modern life, Godard is simultaneously making hints towards the mutual obligation to acknowledge the past. Yet he is also suggesting, through the countless archival images of past dictatorships and wars (Hitler, Stalin, and Mussolini all figure into the film's essayistic, aggressively Eisenstinean final section), that some of the travesties of history may still exist in less instantly identifiable forms. Money proves to be the fetish object for the passengers aboard the ship and for Godard's camera, an on-board Christian mass is stifled of its spirituality amidst the schizophrenic clamor of the neighboring activities, a hysterical young woman falls, perhaps to drown, into a swimming pool on a lower deck of the ship and no one seems to take notice, and in the film's second section a news crew gently terrorizes the casual bucolic lifestyle of a family with some connection to a local election. Little here is untainted by what Godard implies are the shortcomings of the day: greed, overindulgence, insularity, ideological tunnel vision, and general ignorance. Running through the film are questions left dangling in thin air. Do we merely repeat history? If so, how do we break the cycle? If not, are we better off for it? 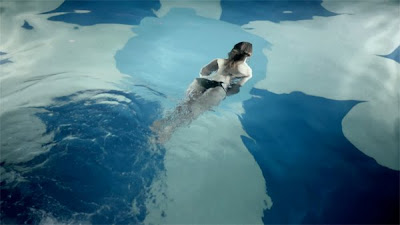 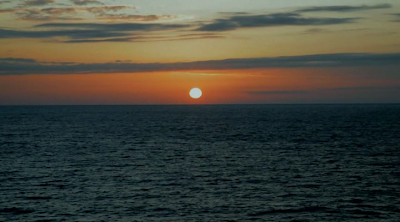 3.) As for the future, Film Socialisme appears to preserve a great deal of hope. Caught within the vicious montage are occasional shots of comparative tranquility that are all the more lovely for their brevity. Several meditate on the ebbing and flowing of waves created by the ship's movement, one captures a woman framed within the shadow of a pinwheel, a visual emblem of the inexorable flow of time, and one that shows the golden sun resting on the horizon above the sea is downright Spielbergian or perhaps Felliniesque in its visual romanticism (Empire of the Sun and the latter's similar cruise flick And the Ship Sails On both come to mind). What these images share is a sense of looking beyond, past the veneer of the high-class cruise and past the political machinations of single family. They seem to possess a hope that perhaps the beauty of nature will cure things, perhaps it's enough to clear the slate and send the world on a better path.

4.) For Godard, this "better path" seems particularly Brakhagian. In his "Metaphors on Vision," Brakhage famously wrote:

"Imagine a eye unruled by man-made laws of perspective, an eye unprejudiced by compositional logic, an eye which does not respond to the name of everything but which must know each object encountered in life through an adventure of perception...Imagine a world before the 'beginning was the word.'"

In presenting the film in a variety of languages with only fragmentary subtitles (in "Navajo English") that indicate only key words and act more as think pieces than translations of what's actually being said, Godard is reaching for a manner of perception that is more visceral, encouraging his audience to think on terms divorced from language, our easiest and most common route to comprehension. Resisting the alleged English-subtitled version that's been floating around on the internet seems the correct course of action, because such a linguistic specificity would squander the universal language Godard's attempting to impart. (Which is somewhat of a curiosity in itself; embedded within the film's unusual subtitling gimmick is also a critique of the loss of multilingualism, particularly in America, and the increasingly narrow scope of language-speaking worldwide. Perhaps a world in which everyone knows every language is ideal, but if that's unrealistic, a world where we can communicate through the primal vernacular of images is an adequate secondary option.)

5.) It’s no surprise that Godard declines to show up at press events and premiere screenings of his films and no longer bothers to maintain a public persona at all. There's so much about this film that indicts the idea of the single author, which is rather ironic given Godard's place in the pioneering of auteur theory. Film Socialisme offers up a stew of familiar images from the history of the world and the history of cinema (the Odessa Steps, the Holocaust, random spy characters who have seemingly escaped from one of Godard's 60's films, famous singer Patti Smith) and asks the viewer to assemble the pieces in whatever way they please. It's remarkably generous and not a tad lazy, since Godard's obvious labor assembling his feverish montages is noticeable throughout. That he has designed his film in such a way to provoke as much contemplation from the audience as possible is a refreshing decision, and it leads to an exhilarating, eye-opening, and truly democratic piece of cinema. Oh, and it's laugh-out-loud funny too.
Posted by Carson Lund at 1:34 PM