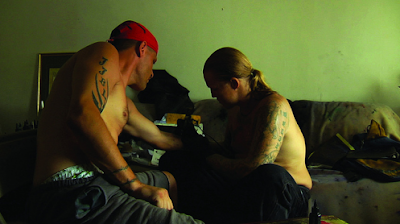 Avoiding cliché, hyperbole, and mumblecore posturing, Matthew Porterfield's Putty Hill gets right to the heart of its eponymous community, a small working-class neighborhood on the outskirts of Baltimore. It is there that he loosely documents the undramatic goings-on of a faintly connected group of people in the limbo period before a funeral. Porterfield points to Pedro Costa, particularly his sprawling In Vanda's Room, as inspiration for his approach here, which casually jockeys between narrative and non-fiction, ultimately raising questions about the origins of each. What's more, drugs play a pivotal role in the subject matter; here, they are the cause of the premature death of Cory, a local skater whose untimely and offscreen overdose is the impetus around which the film is structured. It's also a matter of fiction that Porterfield constructs to examine the virtues of community, family, and memory as united by tragedy, but what's so extraordinary about Putty Hill is how honest and authentic it feels. I didn't know Cory's death was a ruse until after seeing the film, when Porterfield unassumingly addressed the matter in a post-screening Q&A.

Erecting an observational ensemble study atop a fictional foundation allows Porterfield to achieve two unique effects: that of drama and reality coexisting in never quite clearly demarcated degrees, and that of real people pulling from their own memories and life experiences to comment on the subject of mortality. Putty Hill is essentially about people, their stories, and the way that those stories find ways to link up, and Porterfield's attention to the simplest, most mundane of behaviors is never less than rapt. After a wordless opening consisting of shots inside the barren rooms of Cory's apartment, the death quickly becomes peripheral to the film's engrossing immersion into the day-to-day rhythms of the milieu, merely a jumping off point for Porterfield in his insistent probing of individuals. Without warning, the director will hang on a close-up of some townie - young or old, boy or girl - and begin asking prosaic questions from behind the camera: "What is your name?"; "Did you know Cory?"; "What do you think about going to a funeral?"; "What do you do here in Putty Hill?" The performers - many of which are playing near exact versions of themselves - relay a comfortable spontaneity before the camera in their uncomplicated, often choppy answers, blurring the line between what is rehearsed and what is lived-in and authentic.

Because many of the individuals Porterfield focuses on are people who once lived in Baltimore and have since moved away only to return temporarily for the funeral, the film gathers a striking tension between stability and transience, a mood of dazed pre-funeral stasis where the visitors have nothing to do but visit their old friends and family and the townsfolk feel perhaps too devastated to carry on normally with routines and obligations. A trio of skater girls wander aimlessly in the woods, Cory's mother sits on her porch in the middle of the day blankly, and Cory's friends lounge in pools and inscribe his memorial in spray paint at the skate park. These people are defined by a dumbstruck silence, a disinterest in doing much to divert their thoughts away from the somber event. One notable exception is the local tattoo artist, who Porterfield shows a particular interest in. His tale of vengeance over his wife's assault is the dialogue that inspired the film's making, and the artist delivers the harrowing words in clipped, quiet tones that are nearly stifled beneath the high-pitch buzz of his tattoo gun. The scene, and Porterfield's tight, slowly panning camera, are blunt and intimate, refusing to sensationalize the grim story or the man's clear sadness upon hearing the news of Cory's death. But work must go on, as Porterfield chooses to return to the makeshift tattoo shop later in a scene that eschews dialogue in favor of an extended wide shot of the lowly lit room (it's here that Porterfield's Costa influence is strongly felt). 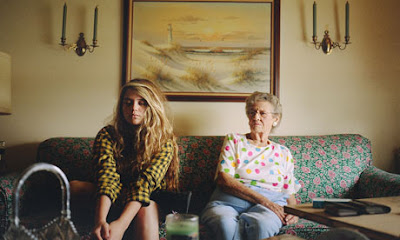 The tattoo artist's daughter Jenny (Sky Ferreira) is also a special subject for Porterfield. At once echoing the indifferent, emo-punk attitudes of her peers, Jenny is also the most thoughtful and complex of the bunch. She takes time out of her day to visit her chain-smoking grandmother for lunch in a geriatric home, and later has the film's only emotional outburst, sobbing and stomping her feet on the second-story porch of her father's house. Porterfield challenges the limits of the long take here, suspending deep sympathy for the girl's somewhat incoherent ramblings to her father about her alleged hatred for him and for Baltimore. Then, as if oblivious to her personal drama, peers into her soul shortly after in the backseat of a moving vehicle as she answers questions about the minor ethical dilemmas of funeral-going. Porterfield so genuinely wants to reflect the varying shades of these people, their dramas and routines, their goals and dreams, and their thoughts and emotions.

Putty Hill culminates, fittingly, at Cory's funeral, a rather unfussy affair at a karaoke bar where the entire array of individuals Porterfield interviews pack into a small room to exchange their sorrows. At this point, this fictional death seems to have bore into the actors' collective consciousness so deeply that it effects their every gesture. It's a remarkably low-key, moving sequence, never devolving into melodramatics or over-stylization. Porterfield and his cinematographer Jeremy Saulnier are decidedly unshowy with their digital images, usually sticking to close and medium shots that keep faces as their primary interest. But the film does not quite conclude here, digressing to a brief episode where some of the wandering teenage girls visit Cory's empty house at night, a dark, foreboding vision that allows Porterfield to flirt with the aesthetic staples of low-budget horror: darkness, shadow, long takes, compositional tension. Unsurprisingly, the film doesn't entertain its subtle sensationalist gestures, keeping the scene to its bare essence. In doing so, Porterfield is able to bookend the film with a chilling re-visitation to Cory's house and vitally preserve the unique social experiment that is the film's backbone: the sense of individuals becoming personally affected by events to the point where fiction vs. non-fiction no longer matters.
Posted by Carson Lund at 12:40 PM