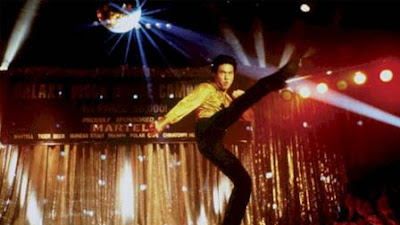 Like Mizoguchi, Ozu, and Ôshima before him, Singaporean director Glen Goei’s concerns lie in the shifting face of Asian culture, in the clashing tides of tradition and modernity that express themselves precariously in the social consciousness. But his 1998 film That’s the Way I Like It is as distinct in its mutated resonance as it is in its unapologetically commercial approach, which strays wildly from historically novel expressions of this quintessential thematic conflict. Verging on indifference and even contempt towards traditional societal mores (so long as the film’s single caricature of tradition bears such disdain for social difference), the film instead giddily absorbs the anarchic collage of transnational stimuli. In it, a go-nowhere supermarket employee lusts after an expensive hot rod, ventriloquizes his idol Bruce Lee, and concretizes the onscreen illusion of a suave John Travolta in his pursuit of disco dancing mastery.

Quickly, the film becomes the Singaporean answer to the American hit Saturday Night Fever, if not an outright remake than at the very least a work that would not exist without its global countercultural impact. In itself, this is a tantalizing prospect: not only has American “exceptionalism” fueled the ubiquity of various corporate chains around the world, it has also become the primary source for inspiration, a necessity for artistic creation. But this is not blatant Americanization as is commonly claimed. Arjun Appadurai’s seminal essay “Cultural Dimensions of Globalization” delicately puts this misconception by the wayside in positing that “the crucial point, however, is that the United States is no longer the puppeteer of a world system of images but is only one node of a complex system of imaginary landscapes”. Hock (Adrian Pang), That’s the Way I Like It’s teenage protagonist, has neither transmogrified his entire lifestyle to that of the national source of his material interests, nor has he actively weeded out all but American stimuli. The Chinese influence of Bruce Lee still weighs heavily on his public (the long, thick dark hair and shirt-popping pectorals) and private (the endless late-night exercise routines and fights with invisible enemies) persona, and his ritualistic nights with friends at the bowling alley (a recreational activity too diffuse to be traced back exclusively to the USA) still define his quotidian life.

The markers of American fetishism come disembodied from their original contexts, nearly becoming new fascinations entirely. Just as Appadurai discussed Filipino musicians covering American popular songs with superior skill and fidelity to the originals despite “the fact that the rest of their lives is not in complete synchrony with the referential world that first gave birth to these songs”, so too does Hock’s increasing prowess as a disco dancer gradually lose any tangible connection to American culture aside from the abstracted icon of John Travolta. Here, Hock displays “nostalgia without memory,” adopting the sociocultural mindsets and material desires (his sexualization of the commodity is a particularly Western tendency) of hopped-up Americans without a historical contextualization for such frameworks. Faux-Travolta’s (Dominic Pace) reemergence in the conclusion of the film, tying together the loose ends, is therefore less a symbol of a completed cycle of Americanization as it is a reminder of the remoteness of his values, especially because Hock has chosen the girl who contradicts his unsubtle and single-minded courting advice. These simple narrative cues, which may seem like obvious emblems of Americanization on the surface, are in actuality loaded images of what Appadurai called the “ironies and resistances” of our global system, a system that now churns multi-directionally and diffuses the modern world in contrast to tradition more than ever.
Posted by Carson Lund at 8:46 PM