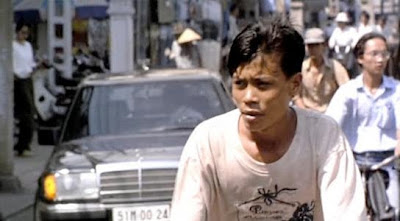 The traditional tenets of a Westernized concept of a nation – those of family, gender difference, and cultural identity – have been splintered beyond recognition in Tran Anh Hung’s Cyclo. In the overcrowded post-war ghetto of Ho Chi Minh City, Vietnam, characters sleepwalk through their daily grinds, taking whatever meager job they can get to struggle by. It's a place of perpetual hustle-and-bustle, an assault of urban stimuli that Tran captures in a collage of fleeting impressions ranging from labor to violence to sexuality to spirituality. The film’s central focus is an impressionable teenage boy who is identified in the script - like the rest of the figures who are defined by their professional type - only as Cyclo, the name given to the tricycle taxi he peddles around to carry supplies from one place to the next. When he is beaten up and his mode of transportation is stolen by a group of thugs, Cyclo’s already thin grounding of stability and identity is forced into flux as he descends into a shady underworld of violence, drugs, and sex.

It’s a scenario that is instantly familiar for its allusions to Vittorio De Sica’s neorealist classic The Bicycle Thieves as well as countless gangster films exploring the subject of innocence lost, but Cyclo’s brilliance lies less in its recycled narrative than in its harrowing depiction of a bruised nation, something it effortlessly aligns with the fate of its protagonist. Tran’s presentation of Vietnam overtly dissects the archaic metaphor of the “national family” by shattering every potential local family in the film. Since his single sibling (Tran Nu Yên-Khê) and mother lead lives just as turbulent as his, Cyclo is conspicuously lacking in any routinized domestic experience, and a gaping absence of a father figure is carved into the film’s DNA. The immaterial presence of Cyclo's father is felt only through periodic bits of poetic narration, seemingly the only fragments of wisdom handed down to Cyclo before his likely death in the war. It is telling that the only fathers in the film - Cyclo's grandfather (Le Kinh Huy) and the father (Din Tho Nguyen) of the gangster leader known as "The Poet" (Tony Leung) - are impotent and irrelevant to the progression of the narrative, wiling away in their drab apartment buildings smoking cigarettes. Without a firm sense of immediate family to fall back on, generations of young people are absent of moral guidance and thus, Hung suggests, turn to illegal activity to scrape by.

While Tran's representation of this illegal activity as reducible to the trades of drugs, sex, and violence may be a deterministic oversimplification of the vast scope of post-war Vietnamese societal degradation, it's important to note that he's attempting to work through the tactile grit of the everyday to get to the level of the allegorical. Characters are unnamed because they are microcosms of more widespread trends of hardship. Cyclo's sister, who is whored out by The Poet, is not necessarily an instrument of Tran's misogyny but rather a symbol of the lamentable tension that forces women in this society to resort to their bodies to get by. Interestingly enough, some of the real movers-and-shakers of this fatherless milieu happen to be women, as glimpsed in the shadowy old mob boss who mediates the economy-defining world of drug and sex trafficking. Alternately, The Poet, her leading subordinate, questions his position of authority in leading his overanxious thugs through a carnival of violence that escalates further and further away from perceivable motivation and logic. (Leung is quietly devastating in the role, even as his actions can be whittled down to moodily smoking cigarettes and dispassionately stabbing victims.) Such imbalances between youth and old age, action and inaction, knowledge and leadership, not necessarily themselves indicative of disorder or chaos, at least point towards a radical reordering of social and national identity as well as a profound disillusionment with morality. 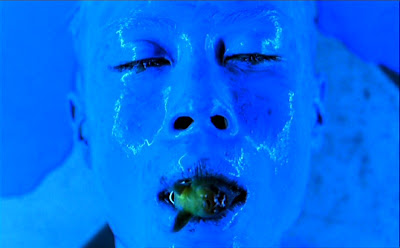 Cyclo meticulously ties its central concepts back to potent visual metaphors nestled within. Tran presents a country forever scarred by violent American occupation during a vicious and prolonged war with an onslaught of intense, savage imagery. His critique of the needless exploitation of the Vietnamese public is never less than teeming with anger, as he frequently collides moments of relative serenity (schoolchildren singing, Cyclo joking with friends, his sister enjoying a night of glamor) with harsh jabs of inner-city bombast as if to juxtapose What Could Have Been with What Is. Accordingly, his camera leaps from being controlled to agitated, with nearly kaleidoscopic bursts of ugly color and movement. Violence sprouts within the film like a tree, branching out to its several characters until Cyclo himself is so entrenched in memories of it that he too loses a sense of rationality; he douses his body in bright blue paint in the climactic scene of the film to signal a complete retreat from reason (and to clarify that Hung was absorbing Pierrot Le Fou at the time). The collective burden is often anthropomorphized, too, in both the shot of a lizard's tail being cut off, in a poultry slaughterhouse (a savagely beautiful scene), and in the throughline involving a fish tank in the mob apartment. There's an inherent imperialism reflected in the gangsters' ownership of the fish that is not unlike that of the American relationship to Vietnam during the war, and when Cyclo stuffs his dirty head into the fish tank in one scene it's a similarly disruptive force.

The integration of violence into the flow of everyday life seems an irreversible phenomenon for the nation of Vietnam, where demoralized endeavors of violence are spread to new generations with regularity. A potent indicator of this fluid assimilation is the omnipresence of liquids - mud, water, paint, blood - in many of the film's compositions. Everything feels soaked in grime, and it seems inevitable (though Tran leaves it up in the air as to whether there is optimism or pessimism to be taken from his recurring shots of schoolchildren) that this dirt will trickle into the incoming generations of Vietnamese people. Tran’s vision of the battered nation is perhaps best visualized by the sight, late in the film, of a goldfish floundering on a wooden floor. Like the fish, the nation, seized and left to die by an outside force, is struggling to survive.
Posted by Carson Lund at 11:34 AM

We're linking to your article for Third Cinema Wednesday at SeminalCinemaOutfit.com

Keep up the good work!