The Silence (Tystnaden) A Film by Ingmar Bergman (1963) 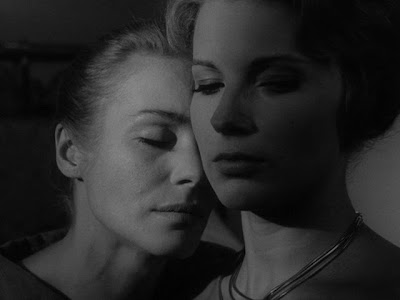 Context has such an integral, inborn relationship to narrative that when it's stripped away, as it is largely in Ingmar Bergman's The Silence, the effect is shocking and unsettling. One of Bergman's most abstract films, The Silence is an outgrowth from no foundation, a tree without roots that springs towards the sky regardless with no base of logic to understand its tangled paths. Alienated sisters Ester (Ingrid Thulin) and Anna (Gunnel Lindblom) await an ineffable something in the cab of a train along with Anna's young boy Johan (Jörgen Lindström), coming from nowhere in particular as stated by the film and headed to wherever the train takes them. This is not a train as a train, that practical engine for getting people and materials to and fro, but rather a train as the purest cinematic cipher of meaning. It's a nakedly psychological construct, a symbol of instability and transition, and throughout The Silence Bergman continues to fearlessly employ these abstract and ungrounded representations, beckoning more aggressively than ever for an active engagement from the viewer. The lopsided family moves from one marker of limbo to another, from a train to an iconically strange hotel somewhere in war-stricken Europe, and in doing so they set in motion Bergman's mysterious parable of miscommunication and eroticism.

The Silence doesn't have a narrative form so much as an obscure musical pattern, which at a concise 92 minutes feels like a winding slow-burn towards a pensive climax. Bergman maps out the separate journeys of the three characters in this foreign land of "Tivoli", a fictional town where the inhabitants speak an inscrutable language and go about their daily activities with mechanical precision. It's logical to assume that the journey of each character is meant to intersect in some way, at least metaphorically, but Bergman keeps them self-contained, providing no recognizable motif with which to connect them. Instead, they're arranged in counterpoint to one another in an almost free-associative manner. Johan scours the opulent halls of the hotel throughout the film with curiosity and playfulness, finding himself fooling around with a troupe of dwarfs who perform at a local cabaret and appear to be the only other occupants in the hotel. Meanwhile, sexually promiscuous Anna shows up at the same cabaret desperate for physical contact only to sit in a booth beside a couple making uninhibited love in the corner. All this time Ester, whose unspecified illness instigated the family's detour in the town, kills time alone in the hotel room masturbating, smoking cigarettes, listening to Bach, and having convulsions that occur at erratic intervals.

When the three of them share the same space, there's a tension and jealousy in the room that Bergman captures with spare brilliance. In fact, right from the beautifully evocative opening sequence on the train, Bergman highlights the unrest that radiates through the sibling relationship for the rest of the film. Out of utter silence and ennui, Ester begins coughing and struggling for air, at which point Anna ushers Johan out of the cab to tend to her sister alone. The assistance she offers is masked somewhat by Bergman's restricting perspective, a medium shot of Johan looking through the door as Anna moves about in the foreground. Immediately, Johan is established as the point of sympathy, a nexus of hope and optimism continually challenged by the combative relationship of the sisters. Upon returning to the cab, the atmosphere is chilly and uncomfortable, and the feeling of not being privy to key information clearly overwhelms him. The ensuing sexual rivalry between Ester and Anna - wherein Anna uses the sensual embrace of her own body and an openness to meaningless sexual encounters to taunt Ester's contrasting revulsion of sex - seems to have such a tacitly powerful impact on Johan that Bergman makes sure to visualize it before it even formally begins: a series of tanks drive by outside the train window, their outstretched cannons thrusting forward like an onslaught of phallic imagery. 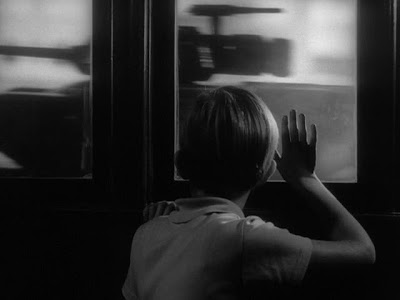 These kinds of startling associations - between war and sex, violence and sexuality - spring up repeatedly throughout The Silence. Wandering the hallways, Johan wields a plastic cap gun tucked into his pants that he jokingly pretends to fire at a man on a ladder fixing a lightbulb just before admiring a provocative Rubens painting adorning the hotel wall. Later, Anna has carnal sex with a soldier temporarily lodging in town who doesn't even understand Anna's heated admissions about her sister due to the language barrier. In fact, the presences of war and sexuality, almost the only thematic presences in the film, weigh so heavily on The Silence that it's impossible not to think of them as informing one another. As such, the image of a hulking tank trudging through the dark streets glimpsed by Ester through the window seems to be a direct result of all the sexually charged bickering between her and Anna, a visual representation of the hostility and destructiveness of their relationship. Similarly, the shot of an emaciated horse strapped to a heavy load (perhaps of war supplies) suggests the baggage attached to the youthful, innocent Johan, the only main character here who seeks lasting gratification from this alien vacation. He even sparks up an odd and wordless camaraderie with the elderly hotel waiter who tends to Ester's illness, witnessing the man's unsettling presentation of childhood photographs, most of which consist of him standing beside a tall white coffin that he points to giddily.

Naturally, what all this sex and violence spirals towards is death, that omnipresent concern of Bergman, but here death is not predicated upon God's presence or absence. God is totally out of the picture in The Silence, which is clear enough from the title and the mere fact that the film is the final installment in Bergman's "Silence of God" trilogy. Ester's eventual death, only hinted at by the ending of the film when Anna and Johan leave her alone in the hotel, is solely a product of her confining and unearthly form of love, her inability to actually communicate with other humans in a nurturing manner, not by a refusal on God's part to soothe her crisis. This exorcism of religious inquiry from Bergman's artistic search is a vital step in his career, a move that results in one of his bleakest, most nihilistic films but doesn't prevent him from staring with utter conviction into the human soul and its curious way of forming frictions that result in war and interpersonal conflict. The Silence is a mysteriously compelling poem built from a minimal scenario whose symbolical resonances never fully conquer the film's existence as believable, intensely acted drama.
Posted by Carson Lund at 9:56 AM

Great review Carson of one of my top 5 Bergman films. His Faith Trilogy is a fascinating journey and The Silence is the most troubling and enigmatic of the three. The dichotomy of "Passion" and "Purity" is present in the form of the two sisters, but neither is able to take comfort in what they do or who they are. The boy is the everpresent concience of the film. Watching and wondering he is the witness to deterioration at play. This is a most important work for Bergman, presaging his surreal and experimental works to come: Persona, Shame, Hour of the Wolf, The Passion of Anna. Great Stuff.

Jonny, this too is among my Bergman Top 5 along with Fanny and Alexander, Persona, The Seventh Seal, and Wild Strawberries. Its enigmatic qualities are what I love so much about it, the way that it simply eludes full understanding every step of the way. In fact, one thing I meant to get into the review was the way Bergman's camera, with all its little movements and shifts in focus, seems to be whispering to the viewer, commenting on the action in a way that's very hard to pin down.

Also, that you mention the dichotomy between the sisters reminds me of another feeling I get from watching The Silence: the question of whether Anna and Ester represent two halves of a single consciousness. It sounds reductive, I suppose, but using it as an interpretive framework offers an even more expansive discussion. Thanks for the comment.

Carson, yes about the two sisters being of one conciousness- this reading and interpretation begins to take form even more when one considers Persona, which came after this where he essentially took that idea even further. Yes I like that reading very much now that you mention it.