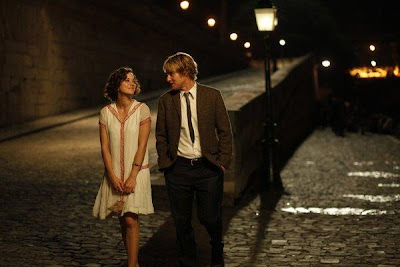 I've been disappointingly slow in catching up with the latter half of Woody Allen's oversaturated directorial career, which seems to be defined by countless riffs on the same themes, stories, and characters. What Midnight in Paris appears to suggest is that in his old age Allen has grown both wiser in his worldview and more juvenile and obvious in his delivery methods. The film's hokey premise – an insecure Hollywood screenwriter and wannabe novelist Gil Pender (Owen Wilson) strays from his fiancée Inez (Rachel McAdams) on their Paris vacation to find himself moonlighting in the 1920's nightlife among his various artistic idols – feels ready-made for a high-school-level improv skit, or perhaps a young Allen-influenced filmmaker trying his hand at self-referential comedy. (If this is the so-called late career "comeback" Woody needed, I have even less anticipation for his other recent films.) But while the scenario compulsively heightens in absurdity, with Gil speaking dreamy gibberish about his new friends in the 1920's and Inez writing him off as some drugged-out lunatic, or his eventual romantic pursuit of a Picasso mistress named Adriana (Marion Cotillard), Allen's firm grasp of it rises in conviction, sincerity, and sheer craftsmanship. In a nutshell, Midnight in Paris is the grand, eccentric realization of an utterly stupid idea.

The film's treatment of Paris as a lively receptacle of history and culture, where ghosts of the past slide with ease into the present (a metaphor made concrete through the scenario), hearkens back to Allen's Manhattan, where the American city was treated as similarly fertile ground for artistic influence. But there's something different going on here; Allen's latest film is not so much a love letter to a city as it is the deconstruction of a mind so smitten with a city that it sees that which is not there, or put in other words, finds creation in reality. Midnight in Paris, then, could have been set anywhere with as vivid a cultural lineage as the French capital, allowing that the main character was as doe-eyed about it as Gil is about Paris. Arriving there at the beginning of the film, Gil lectures Inez about the allure of the city like a schoolboy recounting his playground adventures to his mother. Problem is, it's not only Gil lecturing but also Allen unsubtly dishing out character exposition through explicit address rather than a casual compiling of conversational details, something that he can't seem to stop doing in Midnight in Paris. At one point, when the couple meets Inez's parents for dinner, Gil quickly launches into an anti-Tea Party rant, seemingly for the express purpose of establishing that Inez comes from a Republican family.

Allen continues to layer the unlikeable qualities of Inez and her family – Inez is taken by the pseudo-intellectual filibustering of her old professor Paul (Michael Sheen) and she eventually hits the sack with him, her mother is a materialistic snob who thinks that an $18,000 wicker chair is affordable, and her nosy father goes out of his way to hire a private eye to follow Gil on his nightly prances around the city – until it's only natural that the film finds an escape route to the 1920's, some breathing room from the stuffy social atmosphere of the present. The film presents the past through Gil's glorified lens, a fantasyland where nightlife is always raging and everyone he runs into is a legend in the history of Western literature, artwork, or cinema. Wilson plays off this spectacle with wonderfully slapsticky immediacy; his initial reaction to F. Scott and Zelda Fitzgerald (Tom Hiddleston and Alison Pill) is a precarious mixture of disbelief and amusement, and as the big names pile up over the course of his first night in ancient Paris (Cole Porter, Ernest Hemingway, Gertrude Stein) it's not unlike the sight of watching a first-time drunk happily accepting his thorough displacement (one reaction shot as the legends all dance together at a cabaret is particularly priceless). Gil's experiences in this bygone era are so ludicrously idealized – he becomes acquaintances, if not friends, with nearly every historical figure he bumps into – that it's tough not to see it as an elaborate mental construction, a perfect dream. To return to this dream, Gil has created a simple escape mechanism: all he has to do is sit on a specific set of steps just as the midnight gong rings in the new day for the entire look and feel of the film (the production design, cinematography, and costumes) to be suddenly and magically ruptured. 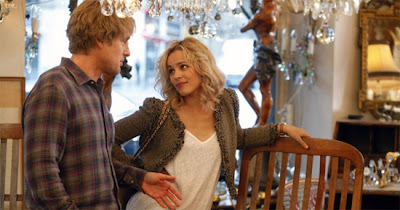 Protruding from this set-up is a plot involving Gil's idyllic love object (Cotillard's Adriana), allowing Allen to chart the hilarious disconnect between past and present. This is most skillfully rendered in a great bit of physical comedy when Gil steals Inez's favorite diamond earrings to give them to Adriana based on her written yearnings in an old French memoir that is translated for Gil by a present-day museum tour guide. Of course Inez returns to the hotel room with her parents partially to grab the earrings and Gil is forced to pluck them out of their gift box nearly in front of her eyes to fake them being scattered in the bathroom. Other times, Allen uses the drastic separation in time to plant clever in-jokes about artist's careers: Gil, in an attempt to surprise Adriana with his creative genius, drops the seed for The Exterminating Angel to Luis Bunuel, Ernest Hemingway speaks in a stoic, poetic manner typical of his prose, and Gil must prove to a suicide-prone Zelda with little evidence that's not creepy or mind-boggling that her husband's only love is for her. Towards the end of the film when Adriana reveals her glorification of the Belle Époque in a way that instantly recalls Gil's blind love for the 1920's, it's easy to see where Allen's taking us, but the general predictability of the whole affair is never overwhelming or self-defeating. In fact, unusually for a film about the awkward leaping between time periods, Midnight in Paris's greatest asset is its remarkable pacing and flow, the care and precision with which Allen has arranged his images (the honeyed gas-lamp glow courtesy of cinematographer Darius Khondji is one of the finest visual accomplishments in Allen's career).

In spite of the pitch-perfect cast however, there's often a noticeable stiffness to the line deliveries, a lack of the natural chemistry existing in Allen's best work, and this shortcoming becomes even more pronounced when Allen makes Wilson spell out the film's heavy-handed lesson about the fallacy of romanticizing the past in neglect of the present during a scene in the Belle Époque with Cotillard, a thematic thrust gradually hinted at by various characters throughout the film. Funny thing is, Allen seems to contradict his own message by presenting the past exclusively as a place of historical caricatures and endless intrigue and the present as (mostly) a place of uppity, snotty Americans who take for granted the simple things in life, including female representations that border on the sexist (all that's missing is the sickly blue tint that so many unimaginative directors incorporate when trying to evoke the despair of our modern world). A belated first try at romance between Gil and a Parisian record-store employee (Léa Seydoux) with whom he seems to share everything is a flimsy stab at surrounding the present with an equal sense of mysteries and opportunities on the horizon, not to mention the fact that it provides the film's eye-rolling final scene. But major flaws aside, it's hard to get past the feeling that Allen's saying something essential and timeless here about the threat of succumbing entirely to nostalgia, and that he's saying it inside a taut and assured package.
Posted by Carson Lund at 9:23 AM