A Short Leave of Absence 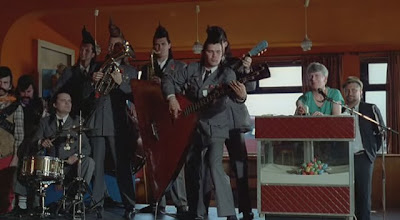 Unfortunately, I won't be in the film state of mind until after July 10th because I'll be on a tour through the Midwest with my band Old Abram Brown until then. As a result, there won't be any posts here for a while, with the one exception being my announcement of my pick for the July installment of the Inexhaustible Documents Record Club, which has already seen an entry at Only the Cinema for The Congos The Heart of the Congos (check out my side banner for this month's upcoming discussion). So I'll see you all in July!

(P.S. If you can guess what film the above image is from, you'll have infinite blogger street-cred.)
Posted by Carson Lund at 9:37 AM

Good call there, Jonny. You got it.