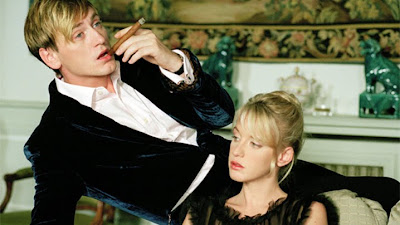 I've always shied away from using the word "weird" as a critical term, seeing as it really doesn't say much and might as well be a passive admission of xenophobia. Even in the face of so-called obscure and esoteric cinema, say, by the likes of David Lynch or Alexandro Jodorowsky - who are almost unfailingly dubbed weird - I usually have a sense of where the director is headed, what their particular aesthetic intentions are even if their end goals or their tricky subtexts escape me. Acknowledging that it's a pretty useless and subjective term in the first place, allow me the luxury of saying that Claude Chabrol's A Girl Cut in Two is the first film I've seen in a while that I feel comfortable calling weird. No, there's nothing outwardly bizarre at work here, no surreal imagery or batty subplots, just a simple, familiar, even perhaps too familiar, love triangle featuring a talented young blonde, an old and successful novelist, and a privileged and elitist young lad. In fact, if watched casually at just the right angle, everything might seem perfectly in place. But then a closer look yields an abyss of peculiarity, a tonally ambiguous mess of aesthetic and narrative choices that doesn't seem acceptable coming from a well-seasoned director like the French New Wave veteran Chabrol. It's a work in which intentions seem almost deliberately obscured, as if it's actually provoking you not to like it.

The workings of the film's plot revolve around the bourgeois concepts of publicity and privacy in romantic endeavors, and it's through these social constructs that the characters are able to maneuver around one another. Gabrielle (Ludivine Sagnier), a highly regarded but modest TV personality, prefers to not let her increasing stature and wealth dictate her private life. She lives at home with her lonely mother (Marie Bunel), a basis of comfort to offset her ever-changing and fanciful young career in which she is taken out by wealthy men and offered higher positions at work regularly. It's inevitable that a girl like this, naive as she is, might interpret all of the attention as exciting rather than manipulative, and as such she is somewhat oblivious to the predominantly sexual interests of her two pursuers, Charles Saint-Denis, a famous writer and established womanizer, and Paul Gaudens (Benoît Magimel), a more practical partner for his age who is nonetheless even more unstable and emotionally volatile than Charles. Of course, Charles and Paul share a history of adversity with one another, the source of which is never explicitly stated in the film, so it's natural that when Gabrielle becomes smitten with Charles the two enter a quiet war of jealousy and entitlement. Charles and Gabrielle's relationship becomes unusually public, but Gabrielle remains wishy-washy about it in front of Paul, who desperately tries to woo her, poetically pronouncing his love like some Shakespearean hero but without the intelligence and decency such a profile would suggest.

A career defined by an interest in social hierarchies might lead one to believe that A Girl Cut in Two, loaded as it is with caricatured and unlikable people, is a satire, but Chabrol is so passé and detached in his dealings with smug, womanizing, and close-mouthed people that he threatens to wade into that same territory himself. When Charles takes Gabrielle to a high-class S&M club to "introduce her" to his friends as some perverted birthday surprise - one of his sordid passions that Chabrol curiously lets fly - the scene's ugly undertones are hidden through the niceties of upper-class behavior, and Charles flimsily attempts to justify his actions to his dispassionate editor Capucine (Mathilda May), who responds with the same expression of indifference that she wears throughout the film. It's not good enough to just show these people; in order to be satirizing, there needs to be a clear stance on the immorality, a position reflected in the construction of the film. People, particularly women and even more specifically Gabrielle, are exploited and manipulated throughout the film, and when prompted to own up to it, they turn away with a disaffected grin, unwilling to take responsibility for their actions. Chabrol practices the same behavior by continually refusing to show any of the implied taboos head-on, thus recycling the same vague chain of passive "forgetfulness" and denial that is seemingly being reprimanded in the characters. Whenever the sex acts so casually hinted at are about to occur, Chabrol cuts away or turns his camera to something unrelated, afraid to actually confront the issues of sexual oppression and adultery raised by the film. A Girl Cut in Two's motives are seemingly not too far removed from those of Catherine Breillat's The Last Mistress, yet Chabrol isn't radical enough to expose the indecencies or try to upend social expectations the way Breillat so effectively did. 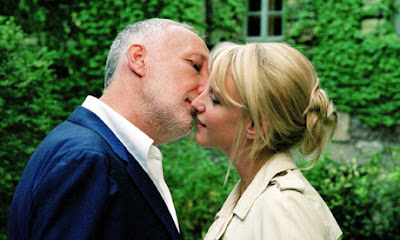 What's so irritating about this lack of involvement is that Chabrol seems to purposefully set up reprehensible morals and large contradictions between thought and action in his characters. Gabrielle's mother comfortably chats with her daughter about Charles over lunch, and she never expresses serious concern for her child's well-being with someone who is in fact even older than her. What's more, she actually acknowledges Saint-Denis' wife, calmly hoping her daughter's fling with the man is not hurting her feelings. She directs the conversation as if it's the wife that she's more concerned about than Gabrielle, yet it's hard to say if she would ever consider acting upon any of her doubts. Elsewhere, Paul gets so wound up about Gabrielle's humble rejection of him that he ends up wrapping his hands firmly around her throat, an outburst of emotional immaturity and aggression that Gabrielle seems to immediately forget. Although she continues to deflect his overeager efforts at romantic connection throughout the film, when Saint-Denis hits the highway and leaves her reeling with sadness, she suddenly agrees to marry Paul. It's quite clear that Chabrol means to create these implausible scenarios in an effort to indict the absurdity and hypocrisy of upper-class behavior, but his approach is so matter-of-fact and affectless that they feel closer to misconstrued realism than over-the-top farce.

The film's final scene, in which Gabrielle becomes a participant in her uncle's guillotine magic act, bluntly and belatedly cements what the film was at least trying to get at: that Gabrielle is a woman torn apart both by her affiliations with two men and by the social conventions that restrict and encourage certain behavior. That Chabrol was aiming for this commentary makes the disconnect between intent and execution throughout the rest of the film all the more bizarre and disconcerting. Savgnier's single reserved tear as she turns away from the audience of condescending pseudo-intellectuals that populate the film - perhaps her lone acknowledgment of exploitation in the film - goes a longer way towards expressing Chabrol's ideas than any of his mismatched directorial attempts, and indeed her performance in general, whimsical but not without a degree of inarticulate sadness, manages to keep the film watchable through its frustrating onslaught of zombified bourgeois brats.

But beyond anything occurring on a narrative or thematic level in A Girl Cut in Two, there are seemingly unmotivated stylistic moves that prove to be the real head-scratchers. The film begins with a blood red color filter slapped over its images of car travel, perhaps a flimsy foreshadowing of the climactic murder scene but too brief and overt to really make an impact. Then there is the slapdash editing, the blink-and-you'll-miss-'em establishing shots and extraneous coverage that suggest a hack editor with no feel for pacing, or the one inexplicable instance of a shot of the top of a building gradually darkening over its five-second screen time as if the aperture was being fidgeted with mid shot, or the clumsy score that stops and starts on a dime. And let's not forget Chabrol's occasional disinterest in providing any sort of bridge between scenes, dropping you in on one conversation in the middle of another, jumping locations and visual palettes without any care for audience disorientation. It's perhaps this technical incompetence, more than anything, that makes A Girl Cut in Two such a weird, destabilizing film, because the last person you'd expect to make what looks like an amateur production is a director with over fifty years in the business.
Posted by Carson Lund at 10:21 PM