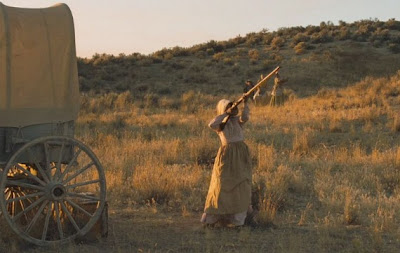 As the first title card ("Directed by Kelly Reichardt") graced the screen at the end of Meek's Cutoff, the predominantly old crowd at my screening started to unleash a wide range of juvenile sounds from snickers to outright laughter. Around me, dissent hissed: "we've been punked!", "someone forgot to finish the screenplay", and "well, I guess there's no resolution there..." were among the common remarks amidst all the angry hysteria following Reichardt's modest fade to black at the conclusion of her film. It was all a tad, well, childish, especially coming from a crowd made up of people who have presumably seen, you know, a few movies in their lifetime. I couldn't help but feel the kind of strong defensiveness boiling up in my gut that any cinephile might feel after a great piece of art is wrongfully accused. My overriding sentiments (bear in mind this is a twenty-year-old reacting to people anywhere from their 40's to their 80's) were: "what more do you want?", "haven't you ever seen, or heard of, arthouse cinema?", and "aren't you aware that films can and often do consciously end in ways that do not resolve lingering tensions?"

It was all considerably aggravating, not only because it spoiled the bleak, spine-tingling mood of those final moments, but also because from the very beginning of the film - hell, from the beginning of her career! - Reichardt, as tough and unladylike a director as there is in America, and coincidentally one of the best, had made it damn clear that she was not about to provide any easy resolutions for the audience. The dour, self-defeating, and expansive propulsiveness of Meek's Cutoff is signaled right in Reichardt's detached left-to-right pan watching a group of settlers crossing the one and only body of fresh water they experience throughout the whole film. A lifetime of media consumption has taught us, implicitly, that right-to-left movement is indicative of progress, of some sort of positive momentum - see, for instance, old-fashioned video games where a character (say Mario) must traverse a plethora of obstacles and the further the character moves, the better along the player is (a simple concept that was ingeniously paid tribute to cinematically in Park Chan-wook's Oldboy (2003)). Therefore, it's logical to deduce that left-to-right movement must imply degeneration or stagnation, a retreat away from the end goal.

That's exactly what is happening to the haggard and downtrodden heroes of Meek's Cutoff, a tight-knit pack fixing to follow the path of a mysterious, bearded guide named Steven Meek (Bruce Greenwood), who proves less and less trustworthy as the pursuit of water and settlement grows longer and more physically demanding. The particulars of the end goal for the settlers - Soloman and Emily Tetherow (Will Patton and Michelle Williams), Thomas and Millie Gately (Paul Dano and Zoe Kazan), and William, Glory, and little Jimmy White (Neal Huff, Shirley Henderson, Tommy Nelson) - are kept under wraps for the entirety of this ultra-simplistic narrative, lending it charged mythical undertones. It might as well be Eden that they're searching for, or the holy grail, because the desperation and care with which they slowly forge a sense of distrust toward Mr. Meek is so profound that it sends a ripple of tension through the whole group. Reichardt, who has now refined her sympathies towards the plights of the underprivileged across three films, is excellent at locating this tension early on and letting it casually grow. 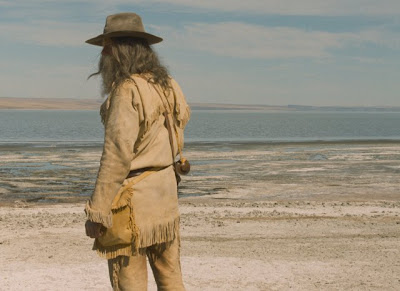 Wisely, Meek's Cutoff saves any true "release" of this tension until the last fifteen minutes, the better to watch it simmer in the ritualistic non-communication of the day's work. To a somewhat lesser extent than Gus Van Sant with his hypnotic Gerry, Reichardt is fixated here on the trance-like, nearly somnambulant rhythms of desert survivalism. The endless creek of the rusty wheels on the settlers' carriages, the plodding crunch of feet against arid ground, and the various sounds of hard labor are all given democratic weight in the film's soundtrack, so much so that they tend to overshadow the soft murmurs of scheming, questioning, and mundane dialogue filling out the background of the mix. It offers a palpable experience of the settlers' increasingly serious troubles in the vast expanse of a very severe and windswept Oregonian landscape. Jeff Grace's stripped-down ambient score, also, is a fitting reflection of the growing unease in these characters, never swelling up but remaining an insistent presence regardless, like the equivalent of a soft and relentless wind.

Typical of Reichardt's cinema is her empowerment of female characters (or perhaps it's more appropriate to simply say her empowerment of Michelle Williams), but it's not so much in any sort of predictable feminist fashion as it is an organic preoccupation with the underrepresented details of women. Reichardt vividly establishes the pre-existing gender hierarchy in the group - the women wake early in the morning when it's still dark to commence chores and remain focused on them throughout the day while the men do the heavy lifting of decision-making and independent exploration just out of earshot - only to undermine it later as the basis for firm decisions crumbles in on itself and Emily must carve her own solution. Her strong will receives its greatest test when the men reel in an enigmatic Native American (whose Apache language is effectively unsubtitled) and are forced to decide what to do with him. Meek, a rampant racist and xenophobe, loudly voices the idea to kill him, while the others, compassionate but nonetheless wary (and certainly xenophobic themselves), suggest they keep him as a more knowledgeable guide to water. Emily is the only member of the group who is willing to fearlessly approach the unnamed Indian (Rod Rondeaux), offering him water, food, and eventually re-stitching his moccasin so that, as she says, he will "owe her something". Williams is silently evocative in the role, her no-nonsense facial expressions cutting fiercely through the shadows cast on her dirty face by her oversized bonnet. In Reichardt's modest decision to single her behaviors out of the crowd, an offhand suggestion of the importance of women in the navigating of the West is unmistakable. 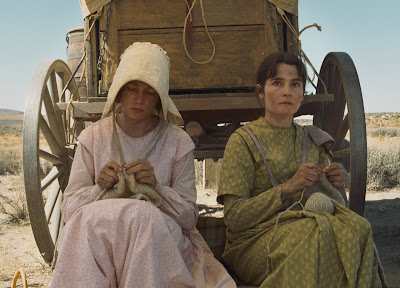 Also unmistakable, albeit nuanced and unfussy, are the political implications in this imposed division of leadership. The settlers, clearly the lower-class surrogates here, have little authority in the actual navigation of the landscape given their naked unfamiliarity with it, but they are nonetheless required to make a judgment about who best to follow: Meek, the equivalent of an unruly politician with his essential understanding of human nature as the manifestation of chaos and destruction, or the Indian, a tried-and-true native of the land with unknowable intentions. This ambiguity propels the drama forward, and the absence of any excess subplots really allows this conflict to be magnified. But Reichardt thankfully doesn't infringe any deterministic message either way, only gestures towards the potential advantages and disadvantages of both options. In a knockout scene towards the end, William collapses from dehydration and exhaustion, and in a presumed attempt to heal him, the Indian begins a native chant. The settlers look on with a mix of confusion, skepticism, and awe, but despite the seeming good-nature of his actions, Reichardt is not merely exposing the privileged ignorance of the settlers. There's also a lingering sense that the Indian is reacting only to mystical instinct and nothing more, or perhaps that he's sustaining a pretend acceptance so that his bloodlust towards the inhumane white-folk remains, for an indeterminate amount of time, unrecognized.

These questions reach their pinnacle in the final scene, and as expected, Reichardt chooses not to answer them, preferring to let the internal strife of the settlers extend to the audience. It's a certainly a bold and "unsatisfying" move that she makes to not resolve the conflicts that dominate her film, but it feels adequately suited to the reality of the situation, which involves a group of settlers wandering aimlessly through the unforgiving clutches of nature. Furthermore, it reinforces the concept Reichardt had been successfully establishing visually throughout: that the landscape is a never-ending vacuum of disorientation and ambivalence. A surrealistic dissolve early on does the trick wonderfully. As the settlers wander off frame in a static wide shot, suddenly a cowboy on a horse seems to step out into the sky from atop the hill in the background. Only slowly do we realize the film is performing an elaborately slow-paced shot-to-shot fade, and any sense of firm perspective is immediately shattered for the rest of the film. In Meek's Cutoff, the Oregon desert is a shifty, claustrophobic space, as much a natural phenomenon as it is a reflection of the torn psyches of the characters.
Posted by Carson Lund at 9:37 PM

Great review Carson and interesting to read how the reaction was in the theatre. I will likely not have the privilage of seeing it in a theatre unless I travel some distance to see it, but I would guess this is probably consistent with much of what would happen across America. Which is sad. Reichardt is doing some great things with her work and this, along with The Tree of Life are the two films I'm looking forward to the most this year. I like your analysis of the "pan" direction. That's good insight.

Jonny, if it's anywhere within a 2 hour radius of you, I'd go the distance. This thing's worth it, I say. It was also one of my most anticipated films for this year and it lived up to it.

I just watched this today at The New Zealand International Film Festival. The cinema was half full but the audience largely consisted of older people (like the audience you described) it was met with the exact same cries of dissatisfaction.

The film was beautiful and the more i see Michelle Williams the more i am appreciating her. I thought the ending was perfect and logical.

Thanks for the comment, distilledwater. Interesting to hear a similar experience. It always baffles me when an older audience acts like children in the face of something challenging. Did they not realize what they were getting into?

As for Michelle Williams, she's getting better and better. She hasn't had a bad performance, and her work for Reichardt is some of her best, largely because Reichardt pushes her into a role where she must be active and persevering.