All That Heaven Allows (1955) A Film by Douglas Sirk 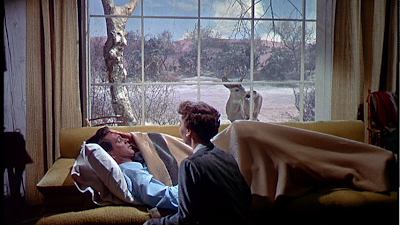 Douglas Sirk's lean, straightforward melodrama All That Heaven Allows is built around the tensions between the public and personal self, particularly those that developed in the suburbs of 1950's middle America. The film's main character is Cary Scott (Jane Wyman), an aging upper-class widow whose unwillingness to upset both her college-aged children and her snobbish circle of friends forces her to disobey her own natural feelings of love towards an unfashionable, flannel-wearing nurseryman named Ron Kirby (Rock Hudson) who is decades younger than her. A more conservative film of the time might have used the May-December romance as a mere comic sidenote, something to laugh at or see as bizarre, but here Sirk embraces the unconventionality of it, staying true to the sensitive feelings of his protagonists while mocking the petty concerns of Cary's peers. It's a biting, nearly angry satire that sides with intuition and the peaceful non-judgment of nature (literalized in Ron's bucolic country home and simple way of living) over the stern formalities of typical domestic life.

As progressive as Sirk's sociocultural commentaries may have been, the script's actual methods of telegraphing them are so blunt and on-the-nose that the characters might as well just address the camera and say what the movie is about. Cary's country club parties, the ones where everyone wears pastel sports jackets and whispers about other couples on the dance floor, are designed largely to make the superficiality of the adults brazenly obvious, as Sirk manages the frame such that there's always a pair of ladies smirking in the background at Cary's surprising romantic decision. Through most of it, Wyman sustains a cosmetically pouty face that screams conflicted, tugging irresistibly at the audience's sympathies. The tension reaches its climax when Cary invites Ron to one of said parties, waging a socioeconomic divide whose intensity escalates quickly after a drunk club member kisses Cary against her will. Having only scenes before been angrily approached by her son (William Reynolds) and daughter (Gloria Talbott) about the prospect of marrying a yokel like Ron and moving out of the storied family home, Cary's inner conflicts, too, reach their apex. 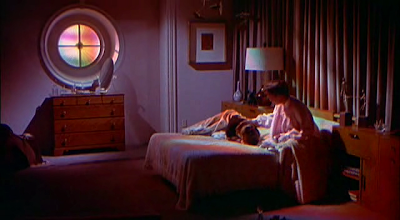 Screenwriting silliness ends up dominating the heartfelt emotions of the narrative when the exact resentment revealed when Cary introduces her planned marriage suddenly turns to apathy in the beginning of the third act. The self-obsessed children return home to regale their mother with new elements in their lives - for the daughter, a husband, and for the son, a new job - that necessitate leaving the same home they insisted should never be sold earlier in the film. In the blink of an eye, the seemingly deep moral oppositions held by the characters are tossed to the wayside and revealed as merely skin-deep, suggesting that the posing about their father's "legacy" was nothing more than a stubborn ruse to dissuade their mother from marrying someone they had no interest in. Were it not so schematic, the emotions here are actually quite devastating, and in some ways the simple power of a lonely woman trying desperately to break free from the straitjacket imposed on her by her family and friends outweighs the often times hilariously unsubtle manner in which it is fashioned.

There's also, to be sure, a certain charm to the story's clunky ways of delivering its ideas. After all, Sirk decidedly lends the film the aura of a fairy-tale-like parable where the good guys and the bad guys (in this case, agrarianism and modernity) are made larger than life. This bombast is quite strikingly reflected in the film's visuals, its most critical feature and the area through which it achieves a singular heft specific to Sirk's melodramas. The entire film is awash in rich complementary colors, most of which emanate from seemingly arbitrary areas of the frame for the simple fact of stylization. Sirk's representation of Cary's home, a dark, uninviting place (inevitably so since it's the tomb of her husband), is almost noir in its slick, harsh shadows and glowing lamps, often bouncing off of objects in unexpected (and frankly probably unintentional) directions. By contrast, Ron's barn is impossibly warm and lovely (and not only because Ron's sprucing it up throughout the film to make it more romantic), its light sources largely natural, albeit heightened. If Sirk's rendering of suburbia was a cinematic distillation of all the competing emotions and brewing secrets of domestic life, his portrayal of nature utilizes the same approach reversed - all the peace, the freedom, and the love, exaggerated. The ending offers up a tad too much Disney sugarcoating for me to swallow, but it's hard not to at least admire Sirk's romantic vision of natural love and his film's ultimate embrace of rural living, even if both are of the distinctly watered-down variety that only 1950's Hollywood could have doled out so unapologetically.
Posted by Carson Lund at 12:18 PM