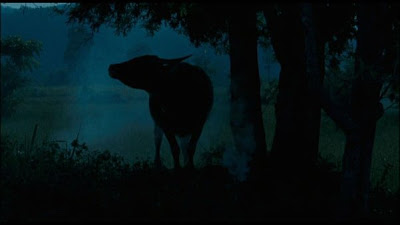 The best few weeks of filmgoing I’ve had in a while are also, due to a generally busy schedule and lack of time, the worst weeks for productivity on the writing end.

Summer Hours (2008): Assayas is an electrifying magician; that is, he can make a work of art while appearing totally artless. Summer Hours, about art and by an artist, feels so offhand and casual and, at first, like anyone could have made it. None of the camerawork is showy, yet every shot is orchestrated like a great symphony. I love how Assayas picks simple, universal themes - the lasting importance of family, the forced estrangement of globalization, the permanent meaning indebted to objects - and simply dances around the edges of them, proving that a director need not highlight with a magic marker his ideas in order for his audience to connect with them emotionally. Showing specifics, not generalizations, is the key to great drama, and Summer Hours is nothing if not a long string of very vivid, petty specifics.

Adaptation (2002): Charlie's one tricky bastard. Upon finishing this film, I thought that Kaufman had self-consciously laid his life on the line and then somehow suffered a crushing blow to his intelligence, ultimately forgetting the point of his movie. For all of the film's structure vs. art musings, it seemed that he had settled for conformity in the denouement (a word which Kaufman's made-up brother in the film pronounces hilariously wrong) rather than meeting somewhere in the middle. But when one places the film's title into the mix, it becomes clear that Kaufman's up to something awfully clever and scathing here. His hero, a representation of his most finnicky, holed-up artist qualities played by Nicolas Cage, is forced to "adapt" to his surroundings, whereby his life becomes an absurd genre movie and is swallowed up by Hollywood conventions. Even so, one wonders if the witty commentary is swallowed up as well by the questionable construction, rendered with perhaps a bit too much conviction by Spike Jonze.

Certified Copy (2010): The best film I missed in 2010, Certified Copy is a masterstroke that reminds me I need to see a lot more by Kiarostami. I always end up saying this, but this might be Binoche's very best performance. The way she so deftly handles Kiarostami's thematic ideas and formal shifts while making it all feel so natural is a thrill to watch. What separates this from, say, her tremendous work in Flight of the Red Balloon or Blue is the vast range of emotions, traversed between with such spontaneity. Kiarostami's directorial finesse is omnipresent but light enough not to overshadow what is centrally a film about conversation. As such, he keeps it simple, using primarily close-ups but creating a psychologized Tuscany outside the frame with sound and background movement. The film's ending, in which the flight of a bird is timed to uncanny perfection, is sublime.

Uncle Boonmee Who Can Recall His Past Lives (2010): Like everyone else, I was put into a trance by Apichatpong's latest, but I don't know if it speaks more to the excessive hype surrounding the film or to its actual inferiority that I still find the film's prequel, the short Letters to Uncle Boonmee, to be a more evocative and visually appealing piece of filmmaking. I mean, there are some shots and lighting setups in this feature version that I seriously object to, not because they're too much, but because they're just plain pedestrian. Yet these are very small distractions; other times the film so looks so beautiful I don't want it to end, which brings up another miniscule gripe. Apichatpong, for all his over-indulgence in the long take in the past, seems to have lost faith in it during some of his strongest shots here. It's hard to argue with a film that had me swooning in its strange power, but I think with some fine adjustments this could have been a real goldmine. As it is, it's certainly a film to get lost in, to live with, and to lounge around in, but it's a bit sad to have to settle for the treasure that it is rather than the film of the decade that it could have been.

The Killing of a Chinese Bookie (1976): This is the ideal situation of a film I once considered a trash heap of lackluster cinema vérité suddenly revealing itself as a deeply fascinating work by a director in utter command of his decidedly rough filmmaking. Cassavetes flirts with noir conventions without ever fully embracing them, always keeping his commanding sleazeball Cosmo Vitelli front and center, unafraid to let such a dedicated loser dominate the frame. The compassion towards the grotesque here is amazing, and the grimy, low-key atmosphere of disembodied, barely visible heads and off-screen voices never ceases. It's a dream, really.

Hadewijch (2009): One hell of an engrossing experience even with its baffling and ideologically questionable third act. Dumont makes stellar symmetry of two musical performances at the film’s center: an outdoor Franco punk act playing a rendition of a Bach tune and a church quartet, both of which the film’s protagonist (first-timer Julie Sokolowski, with a greasy mop of hair) watches in their entirety. Still, I can’t help but think Dumont could have found so many other ways to end the film in a more satisfying (and I don’t mean tidy) manner, and especially without using Islamic terrorism as a mere plot device.
Posted by Carson Lund at 9:15 PM

I really can't wait to see Certified Copy. I heard that it's available "On Demand" somehow but haven't found it. Your observations of "Bookie" are interesting. I've always had trouble digesting Cassavetes. For some reason I can't get into his films and find myself feeling unfocused and distracted while watching. I'm hoping to come back to his films at some point and "get" them finally. We'll see.

Carson, which version of The Killing of a Chinese Bookie did you watch this time around? Was it the same as your previous viewing(s)? Cassavetes cut two versions, the original 1976 one that's well over two hours, and then a more streamlined version two years later that's significantly shorter and has quite a bit of different footage. I'm just curious if this had any bearing on your change of heart. It's one of my favorite movies.

So glad to hear you liked Certified Copy, I liked it quite a bit on my first viewing, but the second time through it just absolutely blew me away. I couldn't agree with you more re: Binoche here, such a brilliant and complex performance.

I need to get around to Hadewijch at some point. I run pretty hot and cold with Dumont, but he's never not interesting.

You write a mean blog Carson. Tell me, what film is the picture from in this piece? I am compelled to check out 'Uncle Boonmee Who Can Recall His Past Lives' after reading your notes. Cheers

Jonny: Certified Copy is playing at select theaters across the country currently, and having seen it on a massive screen, I definitely recommend trying to do the same. It's a great film.

In the wrong frame of mind, I can easily see how Cassavetes would be distancing (in fact, he's had that effect on me). But I would say to keep trying. For me, it took a large screen and very dark theater to completely envelop me in the experience of Cosmo Vitelli. Great films like this really should shine through shoddy presentation, but it doesn't hurt to see it in the appropriate atmosphere.

Drew, I saw the shorter cut this time around, and I think it was the longer one last time. However, the cut I watched was still over two hours, so who knows. I did recognize some trimming that I felt worked in the film's favor, particularly in the dark scene in the cab. Overall, it felt sleeker without losing that characteristic Cassavetes aimlessness.

I haven't seen any other Dumont films, but I've read a lot about their divisive qualities. I was pretty firm in my liking of Hadewijch, but in its tonally disjunctive ending I can definitely see where suspicions arise. In the end, it was, as you say, never less than interesting.

ToeRag: Thanks! The screenshot is from Uncle Boonmee actually. For these screening notes, I try to pick one of the many more memorable images from the particular week of viewing.