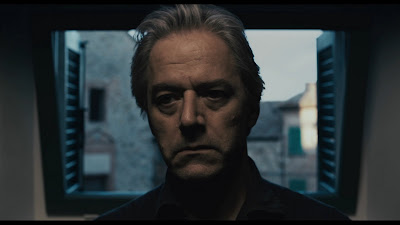 Why is it that when a bride quite noticeably puts an eye-drop in her eye in the background of a frame and then cries in the foreground only moments later we still feel for her? The question might as well be the fundamental mystery of movie-going: why do we invest ourselves in narratives that we know are artificial, "staged"? The aforementioned instance occurs late in Abbas Kiarostami's Certified Copy, right in the thick of yet another situation that begs the question of reality or fakery. Of all the modern directors who deliberately reference the apparatus of the cinema and storytelling, Kiarostami is the most genuinely probing, using this epistemological issue not just as a clever side-note but as the very backbone of his work. The easy answer, as Kiarostami knows, is that it doesn't matter, that if whatever we're watching, real or fake, can hold a mirror to our own lives, who cares? Yet at the same time, Kiarostami is not satisfied with this answer. In every new film, he aggressively pries at text and subtext, form and content, authenticity and illusion, until hopefully something insightful is revealed in the rubbish of the destruction.

That unexpected object of value, that treasure, is Certified Copy. Playing - perhaps consciously, perhaps not - as a Tuscan version of Richard Linklater's Before Sunset (which gets it off on the right foot right away), the film details a day's encounter between an uppity art dealer named Elle (Juliette Binoche) and an Italian writer named James Miller (William Shimell) who comes into town to lecture about his recent book, the central thesis of which states that the distinction between original artworks and copies is a negligible one as long as it retains the same emotional value. The two of them may or may not have met before, a Marienbad-like mystery that hangs over the entire film. Kiarostami excels at doing the same thing with a mystery that Resnais did: suggest a possible solution only to complicate it moments later, ultimately building up such a heaping pile of these red-herrings that the very basis of reality is obscured. In the opening sequence, it seems clear enough at first that Elle is simply attending Miller's lecture out of scholarly interest, but as her presence grows progressively disruptive (thanks to her bratty kid who whines about hunger in the corner of the hall) and Kiarostami's unadorned mise-en-scene isolates individual expressions at just the right time (first revealing Elle and Miller in the same frame at an equally opportune moment), the question becomes how a woman with merely leisurely reasons for attending the lecture would cause such a quiet stir and leave before the end, not to mention bring her kid in the first place.

Only a few minutes after Elle's son mentions "that man" in lunch conversation and she brushes it off like any mother would when asked an uncomfortable question about her romantic life, Miller is seen in Elle's basement art store circling the shadowy paintings and sculptures before calling halfheartedly to her. Their exchange stays strictly cordial, like two strangers ready to share thoughtful conversation about a subject they share an interest in, but when that conversation does come in a long and revealing car ride (leave it to Kiarostami to dispel his film's thematic keys in the utterly singular social context that is the two front seats), ideological tensions arise that just nearly transcend the domain of detached argumentative discourse, as Elle begins to gradually expose more and more personal quibbles with Miller's cerebral artistic inquiries. Driving past a series of geometrically placed tall trees, the two discuss the theories of Miller's book, referencing the trees in a way that simultaneously reveals their originality and also their essential nature as copies of other trees, especially in such a landscape where humans have sculpted nature to their own aesthetic liking. 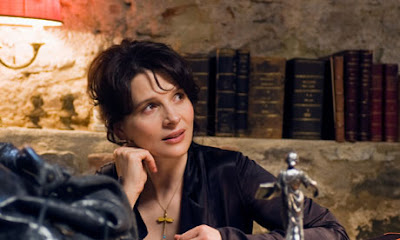 So, is it possible that the distinction between originality and replication is actually an inextricable rather than mutually exclusive one? That issue receives a major workout when Elle suddenly goes along with a cafe owner's reference to Miller as bearing the appearance of a great husband, playfully rebutting with his imagined domestic shortcomings and treating Miller as her husband the moment he returns to the room. From there, she's doing one of two things, or perhaps both given the film's philosophical engagement with behavioral dualities: enacting a prolonged role-play as Miller's wife or simply quitting the facade and finally unleashing the buried emotional distress of years of romantic estrangement. Both would put Miller's theories to the test assuming that one of the behavioral modes is not genuine, that one of them is a false construct. Quickly enough, this opens up Kiarostami's confrontational interaction with the audience, challenging the viewer to contemplate which of the various iterations of self that we project on a day-to-day basis is an original, which ones are copies, and which ones, if not all, are both.

This is a richly thought-provoking experiment, as I'm sure is obvious by now, and one that Binoche and Shimmell handle with remarkable grace and dexterity. The entire film hinges on the subtle discrepancies in their performances, Binoche's coming more naturally in her full command of the role and Shimmell's ultimately a bundle of restrained reactions to Binoche's charismatic and embittered matriarch (he being primarily an opera singer and this being his first film role). Their shifting personae are reflected in Kiarostami's staging and framing, with his complicated and spontaneous use of mirrors and his isolation of shot and reverse shot as two images in which the characters look directly into the camera, as if speaking directly to the viewer and to Kiarostami rather than their onscreen counterpart. It's all, seemingly, hyper-controlled, so much so that when a bird flies by a window in the blurred background of a shot in the final scene and provides a perfectly atmospheric touch, it calls to question how much of Kiarostami's cinema really is a total exploitation of artificial staging and how much of it is simply a product of being in the right place at the right time, a collection of truly original moments. Make no mistake about it, despite the film's conscious integration of classic European art cinema tropes and its outspoken skepticism about the very notion of originality in art, Certified Copy is one-of-a-kind.
Posted by Carson Lund at 6:09 PM

Can't wait to see this one. Kiarostami is definitely a challenging director whose work can't be missed. It's not playing anywhere near me which is an insult.