The Anchorage (2009) A Film by Anders Edstrom and C.W. Winter 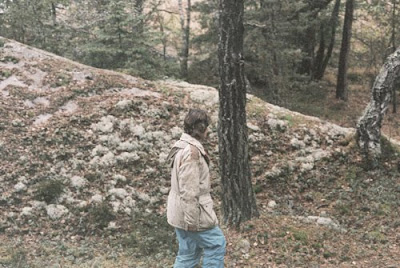 C.W. Winter and Anders Edstrom's The Anchorage began as just a lichen documentary. The two friends - a Californian filmmaker and a Swedish photographer - set out to an island in the Stockholm Archipalego in Sweden where Edstrom's mother lives and began filming. Then, at some point in the process, Edstrom's mother told them a story about a time on the island when she felt discomforted by the arrival of a hunter, who scoped his prey unusually close to her home. Immediately, Winter and Edstrom knew they had something. The lichen documentary was ditched, and they worked off of these bare ingredients to construct what would become The Anchorage, a lovely, quietly unsettling work that still feels somewhat like a documentary, the subject of which the film seems to constantly be in search of. It's indistinct and ragged, loose enough to let itself be guided by the rhythms of nature yet still peculiarly towed down to an unmistakable, rigid structure. Edstrom's mother Ulla, who is the film's human center, wakes up at the crack of dawn each morning to take a quick, nude dip in the arctic bath of the Baltic Sea, and Winter and Edstrom show this ritual three times throughout the film at equal intervals, scrutinizing with their long, unblinking camera not only the blink-and-you'll-miss-it swim but also the moments of preparation and drying off before and after. The film acquires a rich quotidian cadence due to these uniform episodes that is not unlike that of Chantal Akerman's Jeanne Dielman, which encourages a heightening of attention to minutiae, to subtle shifts in routine.

In between these morning swims, Winter and Edstrom fill their film up with Ulla's daily activities, like walking through her heavily wooded backyard, gutting fish, or motor-boating into the nearby village to obtain supplies. In the first third of the film, she is visited by her daughter and a family friend, offering a rare glimpse of companionship for Ulla. But Winter and Edstrom play down the human story anyway, or, perhaps it's more appropriate to say that they don't play anything up. The minimal dialogue is homogenized with the surroundings, just about as loud (or as quiet) as the sounds of a crackling fire in the yard, or the birds chirping in the distance. They're gone before you know it, and Ulla is left to return to her quiet domesticity, carefully arranging her provisions to support herself in the most modest way possible (one recalls Bergman's retreat to Faro Island in his final years, where he surrounded himself with only the most fundamental units of importance to his life). Her only connection to the outside world is her tiny radio, which delivers arbitrary news stories as she walks in and out of the various rooms of her small cabin. She's a woman of profound independence and dignity, and ultimately this stuff is extraneous to her.

Winter and Edstrom capture it all with deliberately unfussy compositions and grainy, wondrously textured 16 mm film stock, giving it the patina not so much of a home movie but of a vintage travelogue. This isn't amateur filmmaking; it's purposely restrained and unspectacular in an attempt to wring beauty out of the whole rather than out of individual blocks. I was reminded of the seemingly perfunctory, folksy cinematography of Lisandro Alonso, who deglamorizes his images to give them a palpable weight that is often missing from the pretty pictures of postcard cinema. Various sequences in The Anchorage have this same kind of tactile presence: a shot down the narrow hallway of Ulla's home with a cabinet in focus in the foreground and Ulla moving around freely in the blurred background (Winter and Edstrom don't indulge the rack focus, because the action isn't as important as the space); a repeated image of the window in Ulla's bedroom with the shades strewn casually; a sustained observation of Ulla's fish-gutting routine on the windy docks, giving ample time to understanding the process. 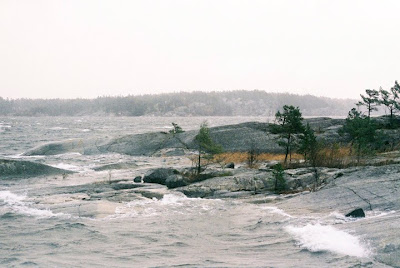 The Anchorage has an equally nuanced sonic patience. Winter, who recorded the rich ambient sounds, prizes the raw, unadulterated glory of field recording, letting certain woodsy sounds accumulate in the distance while the ostensible "action" of the scene is not prioritized in the mix. It's hardly a cinematic tactic; it's more about giving the feeling of being there, no matter how "uninteresting" that might be from an aural standpoint. In one instance, Winter and Edstrom emphasize this sonic realism by cutting abruptly to a shot of Ulla chainsawing through a long tree branch. It's piercingly loud and abrasive, but that's because the sound of a chainsaw is just that: piercingly loud and abrasive.

Given that the film is so intimately fascinated with stasis, routine, and other manners of non-movement, its sudden wind storm, which arrives three quarters of the way through the film and could be obliquely described as a kind of tonal climax, lends a particularly powerful sense of vastness and unpredictable force. For the first time, Winter and Edstrom pull away from the micro to reveal a stunning panorama of the forest, its numerous trees being violently tossed around in the winds. Here, the otherwise irrational logic of nature seems to dramatically align with Ulla's apprehension in the presence of the hunter. For an element that is allegedly the catalyst for the production of the film, Winter and Edstrom curiously downplay the actual vision of the neon-suited hunter, preferring instead to let him drift by for a split-second outside of Ulla's window. Then, in another quasi-Akerman touch, they yield the film's one and only close-up, a shot of Ulla in the bathroom (hiding?) as the hum of the room's fan seems to augment on the soundtrack, becoming an eerie drone before the screen goes black and night falls. This is The Anchorage's strangest passage, largely because it comes so unexpectedly and lasts for such a short period of time, but its impact is chilling. By scrupulously taking away and reveling in the mundane, extra attention is called to these minor blips in the film's tone, raising the hairs on your neck and completing the authentic, immersive world these promising young filmmakers capture.
Posted by Carson Lund at 5:57 PM

Thank you so much for your full review of this film! I have been searching for a copy of this film for some time, without results.
I would so appreciate it if you could tell me where you found it?
I am not familiar with swedish webshops, and it is so hard to find english info and purchase options.
I would appreciate your assistance a lot!
Best greetings

Thanks for the comment, AncestraX. I wish I could direct you to a DVD of this film, but I unfortunately I can't help. I saw it at the Harvard Film Archive on the single day it was being shown. Otherwise, I can understand it's a difficult task to find a film like this.

Where can I find this film?

Unfortunately, it seems there is currently no way to see this film unless it gets a repertory screening. I guess the only option would be to keep an eye on this page or email the filmmakers directly.