Fanny and Alexander (1982) A Film by Ingmar Bergman 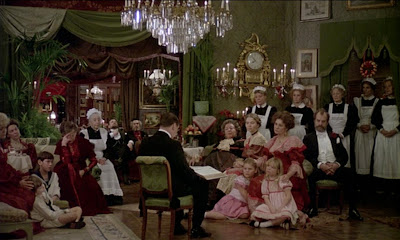 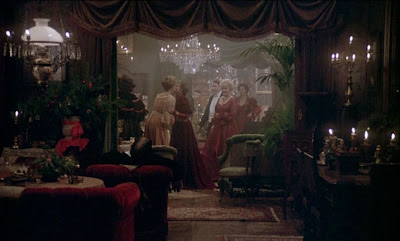 Fanny and Alexander represents Ingmar Bergman's most pointed and personal evocation of the crisis of faith he witnessed in his youth, and ultimately, throughout his entire life. Bertil Guve plays his screen surrogate Alexander Ekdahl, an impressionable and naive child who nonetheless refuses to conform to one manner of thinking in regards to a whole host of beguiling curiosities from death and the afterlife to religion and reality. Instead, he greets these mysteries with a mix of hostility and confusion, preferring to let his imagination lead him where it will. The opening shot frames his head within the small puppet theater he has been playing with in the baroque Ekdahl home, a familiar Bergman image that immediately signals the fictional world he loves to get lost in and the coexistence of life and the theater. For the Ekdahls, the kind of massive and boisterous family one might see in a Fellini film, the theater is everything, a "little world" that is both a lucrative family business as well as a way to escape from and deal with "harsh world outside", as deemed by the patriarch Oscar (Allan Edwall), a short, sentimental guy with a groomed mustache. Anyone remotely familiar with Bergman, a lifelong theater director, will recognize this as his own viewpoint, making it the fundamental philosophical backbone of what is very likely his most outwardly personal film.

This sense of Bergman letting loose with his most intimate experiences is deeply evident in the sensuous, evocative first section of the film at the Ekdahl family Christmas, which plays like an outpouring of fond memories and recollected sensations. Here, the film's origins as a five-hour television miniseries is most conspicuous as it slackens the emphasis on Alexander to spend ample time bouncing around between different vignettes, giving family members seemingly insignificant to the central narrative extensive dialogues, such as the tender reconnection (partly attributed to refills of cognac) of grandmother Helena (Gunn Wållgren) and her past lover and local Jewish merchant Isak Jacobi (Erland Josephson), or the hysterical lovemaking of family friend Maj (Pernilla August) and the charmingly forward Uncle Gustav Adolf (Jarl Kulle). On paper, the abundant detailing of the family's interrelationships might seem like fluffy exposition, but Bergman renders it all so lovingly, mixing moments of vulgar humor (Uncle Carl's (Börje Ahlstedt) exhibition of flatulence for the children) with stone-cold seriousness. In service of all the Christmas Eve merrymaking, Bergman's camera is uncharacteristically energized, panning rapidly to follow Gustav Adolf as he runs into the dinner room with a flaming bowl of punch or the family as they prance in single file line throughout the various rooms of the house, chanting a yuletide carol.

Also in abundance in these early scenes is the color red, which overpowers the supplementary greens, golds, and browns that fill out the ravishing palette. Bergman has remarked on how his employment of red was meant to call back to his own childhood, where red, the shade of blood and the devil, seemed to augment his fear of death at every corner. Interestingly enough, the implications of red are coiled up in both death and immense joyfulness, clearly spread throughout the decorated rooms to suggest warmth and love but also provoking Alexander's fears and hallucinations, such as when he envisions an indoor statue moving. This notion is supported later on when Emilie (Ewa Fröling), Alexander's loving but ill-advised mother, dons a bright red dress in a scene in which both the family reunites and the ghost of Emilie's overbearing second husband haunts Alexander. Even in the company of Bergman's atypically lavish set design, the presence of red in moments like these announces itself as something malign amidst all the cheery, celebratory decoration. 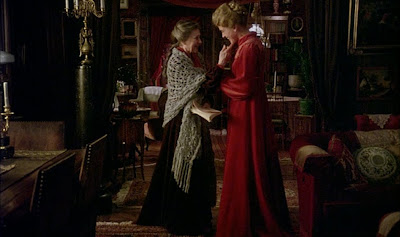 This symbolically loaded color scheme, though intermingled with the bad and the good, serves as a creative wellspring for the young Alexander, an idea that is contrasted by the stark, pale, and lifelike features evident when the film shifts its narrative and emotional register towards the ends of the first half. Alexander's father dies abruptly from a heart attack he experiences during a rehearsal at the town theater, a sudden tragedy that packs the film's strongest emotional wallop. At the funeral, while marching down the aisle with his sister Fanny (Pernilla Allwin), Alexander spurts curse words seemingly to take his mind off the pain, but is forced to face the crushing blow firsthand when awoken in the night by Emilie's devastated screaming. Bergman shoots this voyeuristic moment in a point-of-view shot through the door of Oscar's room, revealing only his deceased father's face jutting above the bed frame and the harsh sounds of his mother's emotional apex. It's a terrifyingly powerful scene that underlines the processes of watching and listening that define Alexander's coming-of-age as well as his desire to create elaborate fictions within his own mind, and in some instances, fictions that escape into real life.

Not long after, Emilie has remarried to Bishop Edvard Vergerus (Jan Malmsjö), an ascetic Lutheran priest who recalls the father of Bergman's own harsh religious upbringing. And it's also not long after their marriage and the subsequent "new beginning" for both Emilie and her children that the film more closely resembles Bergman's great bleak chamber pieces, documenting the descent of the family into full-fledged oppression in the face of the demanding Bishop and his appropriately strict sisters. Alexander and Fanny immediately sense the danger in the coldly calculated and forbidding architecture of their new home, where empty gray rooms offer space for supposed religious contemplation. They voice the concerns to Emilie, who at first writes them off, telling Alexander not to "play Hamlet" and that she is "not Queen Gertrude", that their "kind stepfather isn't the King of Denmark", and that they're not in the "Elsinore Castle." This intertextual reference is, incidentally, almost exactly what the family has gotten themselves into, as Bergman emphasizes the florid theatricality of it all with thunderstorms that compliment the growing menace in the household, the scenario veering closer and closer to something out of Gothic horror. He never lets it get histrionic though, grounding the more baroque touches in long strokes of patient dialogue and cutaways to the rest of the Ekdahls worrying about Emilie and the children in their respective homes. What's more, Malmsjö is a terrifically palpable villain, lending every deep breath and lumbering step forward a sense of dictatorial purpose; the scene in which he castigates Alexander for lying about a vision he had regarding his step-father's murder of his past wife and children is a magnificently paced punishment, one of the most harrowing evocations in Bergman's career of his lingering theme of humiliation. 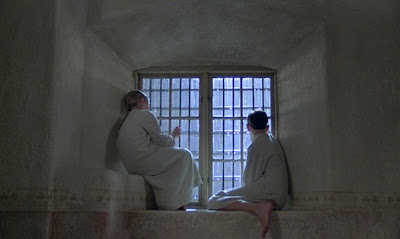 Fanny and Alexander often times possesses the dark charm of a fairy tale in its portrayal of Alexander's maturation, and nowhere is this more evident than in the subsequent chapter of the film when the children are rescued by Isak Jacobi and brought to his nephew Aron's (Mats Bergman) puppet warehouse, a strange and labyrinthine space that seems to morph to the movements of Alexander's subconscious. In the rescue scene, the film's most peculiar moment occurs. When Isak hides the children in a hope chest he is purchasing from Bishop Vergeron, the Bishop grows angrily suspicious and sprints upstairs to find the children still lying on the floor of their room. Whether it's Isak's hallucination, the Bishop's hallucination, or a manifestation of one of Alexander's fictions - and thus whether or not Alexander ever even experiences the puppet warehouse - is left tantalizingly ambiguous by Bergman, echoing the film's final lines, taken from Strindberg, about the flimsiness of reality. Whatever the case, the puppet segment is sublime, definitely one of the dreamiest scenes Bergman ever shot. Set to the recurring melody of an eerie harpsichord, the film cross-cuts between Alexander's middle-of-the-night wanderings - where the ghost of Oscar revisits him, Aron uses puppets to scare him into thinking he sees the enigma of God, and Aron's creepy, soothsaying brother Ismael (played by a female, Stina Ekblad) voices ominously irrational lessons to him - and the scene of the Bishop's death, which involves a sedative from Emilie and an inopportune fire in the house.

That Bergman, even at such a late stage in his career, remained so profoundly ambivalent towards the nature of God and reality and represented this in the questioning figure of Alexander, is a testament to his enduring artistic ambition. What's most resonant about this gorgeous, moving, transcendent film is the self-referential quality of its artistic transmutation, the way Bergman is so exposed about making art out of pain, misery, and confusion, about how something positive can emerge from something so seemingly negative. If one takes much of the film as the subjective visions of Alexander - and boy are they beautifully stylized visions, attributed to some of the greatest cinematography of Sven Nykvist's career - it is evident that an inner artist is beckoning forth from within an introspective, damaged individual. And perhaps his art will evolve with the same expert precision and penetrating insight that Bergman's did, coalescing into a grand statement that's as alternately tender and mournful as Fanny and Alexander.
Posted by Carson Lund at 10:05 PM