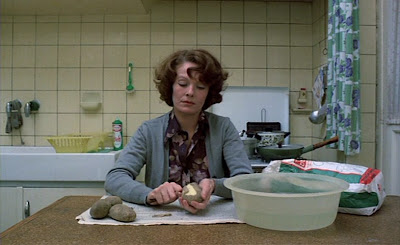 (This is an essay I wrote for my Media Criticism and Theory class. Forgive the dryness.)

One of the most intriguing and telling facets of Jeanne Dielman, 23 quai du Commerce, 1080 Bruxelles - a radical 1976 Belgian film that aggressively challenged prior notions of shot duration and narrative rhythm - is that it was conceived by a twenty-five year old with virtually no classical filmmaking training. Incidentally, it is this very naiveté in the face of the camera, this utter indifference to standard practice, that lead Chantal Akerman to so thoroughly discover her own unique aesthetic, one that, rather than appearing amateurish in the context of proper film grammar, looked fresh and revolutionary. At the time of its release, the canons of film theory had largely addressed the primarily visible regions of film history – Hollywood as well as, to a lesser extent, the collective contributions of international cinemas – and in doing so, attempted to grapple with trends, formulas, and ideological frameworks that guided the majority of work. What’s striking though about Akerman’s film is how actively it seems to run counter to the central ideas in numerous major essays on cinematic convention. With its simultaneously straightforward and ambiguous narrative, its rigorous immersion in time and space, and its destabilizing lack of closure and character psychology, Jeanne Dielman updates and redefines pre-conceived standards for cinematic narrative and realism.

Two essays, in particular, illustrate the extent to which Akerman’s work goes against the grain of popular thought: John Hill’s “Narrative and Realism” and Laura Mulvey’s “Visual Pleasure and Narrative Cinema”. Both pieces formulate their discussions principally in relation to the critic’s dominant native cinema. For Hill, it is both the British social problem film and the films of the British new wave, and for Mulvey, it is the Hollywood industry. The essays stress the notion that mainstream cinema has established an array of intrinsic mechanisms to elicit audience interest and pleasure, mechanisms that Jeanne Dielman either conspicuously withdraws or subtly transforms.

The long-standing classic realism that Hill finds “dated” and “melodramatic”, and which is couched in “habitual versions of dramatic reality”, is far from the kind of direct observational realism Akerman engages with. The film is the documentation of 48 hours in the life of the titular character, a widowed, stay-at-home mother, covering in depth her various domestic routines and only consciously excising her sleep. Taking place over the course of an elapsed 201 minutes, it is often a marvel how the film manages to communicate a persistence of real time even in spite of its obviously considerable extractions. If the “distinctive characteristic of realism resides in the ambition to, in some way or other, approximate reality”, Jeanne Dielman tackles this credo with extreme determination, perhaps coming closer to reproducing reality than to approximating it. Akerman probes her subject by completely surrendering to her daily mannerisms, letting her tasks play out in their entirety and only cutting when she leaves a room. Of course, by its very nature, film can never really be a carbon copy of reality, but Jeanne Dielman’s maximum detachment and sense of letting behaviors play out as they would in the real world at least brings it significantly closer than the watered-down examples Hill describes. 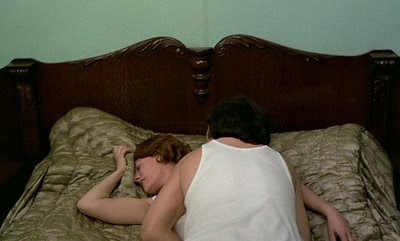 Furthermore, Hill explains what he sees to be an inherent pattern in narrative form of equilibrium, disequilibrium, and a new equilibrium that Jeanne Dielman does not adamantly abide by. “Implicit in the structure of the narrative, its movement from one equilibrium to another, its relations of cause and effect,” he claims, “is a requirement for change.” Normally, it is a force such as a crime that shifts the narrative from its initial state of equilibrium, in which case an investigation would propel the new equilibrium. Akerman tinkers with this seasoned formula by not supplying the second equilibrium and only risking disequilibrium in the final scene, when Jeanne carries out a shocking act of violence against her regular John (her daytime prostitution as a means of economic sustainability is one of the film’s fascinating motifs). The result is a permanent state of anxiety and inconclusiveness extended past the film’s ending. Though Akerman appropriates the change said to be a necessary narrative ingredient by Hill, as Jeanne’s familiarized routine gradually and dramatically disrupts, she undermines it by refusing to resolve the tension, instead compounding it with an even greater act of dysfunction.

This denial of narrative strategy is also built into the underlying ideology of the film. Long praised as a milestone work in feminist cinema for its unimpeded focus on the unspectacular ebbs and flows of a woman’s home life, Jeanne Dielman manages to also deflate Mulvey’s position that built into the very fabric of mainstream narratives, there are unconscious ideologies such as a heterosexual division of labor that categorizes the male as the active force and the female as the passive one. Instead of making a male character catapult the film out of its initial stasis, Akerman lets the vagaries of the minimalist narrative rest solely on Jeanne’s shoulders. The male dominance that Mulvey discusses partly exists through Jeanne’s monetary reliance on them, but it is shattered as the film progresses and her dissatisfaction with her lack of self-reliance appears to augment. This culminates with her final murder of the John, accomplished with the kind of dispassion and precision that would suggest she’s aware of Mulvey’s stance. The murder is figurative before it’s literal; no longer does she have to be vulnerable to the scheduled routines of the exploitative, omnipresent male. She has defeated the threat of masculine oppression, and in doing so, alters the misogynistic bent of the typical film narrative.

Mulvey suggests further that the male protagonist often acts as an audience surrogate, and his voyeuristic tendencies towards his female counterpart mirror an intensified male gaze in the audience. But Jeanne is hardly the erotically charged exhibitionist spectacle that Mulvey asserts. The audience does not gain “control and possession of the woman within the film’s diegesis.” As if to emphasize this, Akerman remains outside the room during her daily sex act, fixing her camera on the de-eroticized image of the door and denying fetishistic entry. Curiously, the film intensifies the gaze in a different way. By placing its central character front and center in every frame carrying out the niceties of a stay-at-home mother, it doesn’t so much elicit a pleasuring of the erogenous zones as it does a reawakening of the long-dormant sensations of the Oedipal complex. Immersing the viewer in the uncannily familiar matriarchal rhythms, Akerman promotes a sense of nostalgia and warmth in the viewer, a sense of being susceptible to the behaviors of the female rather than in control of them. 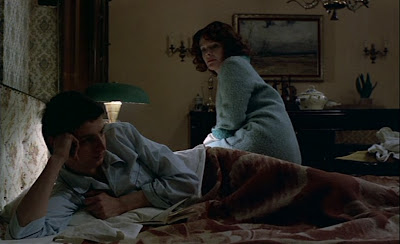 In acknowledging the possibility for the avant-garde to subvert the traditional methods they observe, Mulvey and Hill seem to hint at the particular techniques of Jeanne Dielman. “The first blow against the monolithic accumulation of traditional film conventions (already undertaken by radical filmmakers) is to free the look of the camera into its materiality in time and space and the look of the audience into dialectics, passionate detachment.” This could be interpreted as Akerman’s formal thesis, and by giving her camera the autonomy to simply record the action over extended stretches of time, she removes the possibility of manipulating the content of the narrative. Her “invention of new forms” works to “undermine habitual versions of dramatic reality and thus communicate new, and more fundamental, underlying realities.” The minutiae of quotidian life, glimpsed in its totality, from the painstaking preparation of meals to the folding of clean bed sheets, comprise a world not often seen in the cinema, and especially not in mainstream work.

By boiling her narrative down to the singular focus of one woman’s routinized existence, Chantal Akerman extinguished all matters of cinematic convention from Jeanne Dielman. She suppressed the traditional standard for greater narrative trajectory as identified by John Hill in “Narrative and Realism” and reversed the standardized processes of audience perception highlighted by Laura Mulvey in “Visual Pleasure and Narrative Cinema”. Jeanne Dielman possesses its own kind of narrative ambiguity that extends past its conclusion rather than prematurely leveling out, and it doubles as an acknowledgment of the potential for an active female within a film’s power dynamic. The result is a revolutionary exercise that convincingly puts into question the conventional, popular ways in which films are produced and consumed.
Posted by Carson Lund at 6:43 AM