Dualities abound in Michael Haneke's latest film, The White Ribbon. The title refers to the white cloths that a Pastor (Burghart Klaußner) bestows upon his children as a reminder to practice purity and strong morals, yet beneath this facade there is a static cruelty in their own village. Just as righteousness does not come without pain, love does not come without punishment, and healing does not come without violence, revealed singularly by the town's doctor (Rainer Bock) who also is a savage cynic and an incestuous swine. These affirmations of the polarities of human behavior are not uncommon for the Austrian director of such films as Caché, Code Unknown, and The Piano Teacher, in which the slick, masterly surfaces rarely provide fact, but instead conceal something deeply ambiguous underneath, sometimes even contradicting the latent content altogether. This is once again the case in The White Ribbon, where the idyllic turn-of-the-century German village that the film is set in is really an eerie landscape of menace, a place that is cold and uptight from the very beginning of the film - and presumably even before - when the doctor comes home on his horse only to have it tripped by a transparent wire running across two trees. This incident inexplicably paves the way for a longer string of increasingly extreme displays of strangeness and brutality.

Guiding us with less than a sure hand through it all is the elderly voice (Ernst Jacobi) of the village's schoolteacher (Christian Friedel), who readily admits that he is unsure of how many of the stories he is telling are entirely true. The presence of this unreliable narrator, reminiscent of Citizen Kane, cloaks the film in perpetual doubt. He could be leaving details out inadvertently or skewering the actual events that took place, which is an accurate instrument for Haneke's continuing preoccupation with the elusiveness of truth. In this sense, the schoolteacher shares similarities with the audience, trying to piece together fragments from within the timeline of his life as opposed to our narrower timeline, the film. Such a description can't help but illuminate how Haneke is not much different, the one difference being that he is purposely excising plot points to augment the mystery. As it progresses, The White Ribbon hinges more and more on its central narrative mystery: who is the guilty party behind all of the ominous occurrences? I hazard to say that Haneke is any more suited to find the answer than a given audience member. This is why all talk about Haneke being an overbearing polemicist seems off-base; he's more of an open-minded explorer, always mindful of the various conscious and unconscious implications that his images can evoke.

Fittingly, it seems that for most of The White Ribbon, Haneke is deliberately trying to be as open-ended and neutral as possible. The film's central characters are almost uniformly nameless, and instead are simply stand-ins for the structural mechanisms in society which they represent; that is, the doctor, the schoolteacher, and the pastor position themselves as microcosms of the health system, the educational system, and the church, respectively. While it can be clear when Haneke is condemning a behavior and when he is praising one, the precise reasons behind them are ambiguous. Thus we get a morally nebulous character like the Pastor, who adheres so vehemently to his own austere moral code, leaving no room for all things casual and enjoyable, that he tends to lose sight of what is really right on a day-to-day, moment-to-moment basis. One night, he denies his children dinner and delivers cane whippings the following morning because they wandered into the village without guidance. Yet he also has the capacity to show genuine compassion towards his young boy when he kindly replaces his dead bird with a new one, an emotional dynamic that the acrimonious doctor seems incapable of engaging in with his own offspring. Haneke is less interested in hammering a one-sided "parents-are-bad" or "institutions-are-bad" message home than he is in presenting multifaceted views of complicated, mostly antagonistic figures. 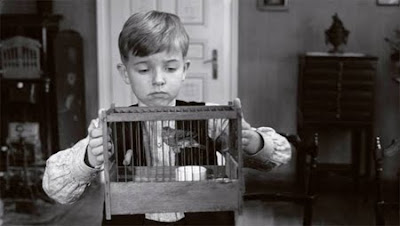 And even more than a bleak character study, The White Ribbon is a broader allegory on the nature of cruelty and hostility, so static across generations that it threatens to be a never-ending cycle. Here Haneke's denouncement is more straightforward and transparent: children are impressionable in the face of their guiding figures, capable of being gradually bent to the way of life around them, and therefore it is the adults who are to blame for this transfiguration of evil. That the film is set directly prior to the point in Germany's history when they would perform the most vicious, monstrous acts of human evil imaginable - one of the more leaden, overtly convenient choices Haneke makes - is heavily significant in suggesting that the negative impact that the adults have on the new generation of children is indeed substantial. The depiction of children in the film is decidedly nontraditional; acting, or nonacting, with the same deadpan, morose theatricality as their older counterparts, the children cheerlessly mope through the village, their most unconstrained human contact coming in the form of playing a wood flute beside a pond or having a delicate conversation about death, as in the case of the doctor's young son and his older babysitter. Yet even in these instances, the weight of oppression hangs over the proceedings, as if an adult is going to spontaneously enter into the scene to deliver some form of unearned punishment. Such an atmosphere is undoubtedly representative of the quiet fear that rests in most of the children's expressions, and manifests itself most directly in a character like the Pastor's son Martin (Leonard Proxauf), who is surely on a path towards deep depression.

Haneke's crisp black-and-white and traditional yet slowly paced mise-en-scene reflects the burdens of the story in a way that is not emotionally distancing, but rather emotionally devastating. While clearly an antecedent of the visual and narrative stylistics of Carl Dreyer, Robert Bresson, and Ingmar Bergman (Bergman especially, whose Winter Light involves characters that in some ways feel reborn in The White Ribbon), the film also manages to incorporate some of Haneke's own personal traits as a director, such as the occasional long take and the use of off-screen violence and teasing, elliptical cuts. The film is also characteristically absent of a score, with the diegetic exception of the children's choir that is shown from time to time in the church, as in the final scene. Like Caché, Haneke fixes his camera on a large group of people, this time gathering rather than dispersing, and as the schoolteacher informs us, probably for the last time. While the audience may collectively sigh at the lack of resolution, Haneke has once again managed to instill shrewd poeticism into the most prosaic of surfaces.
Posted by Carson Lund at 12:18 PM