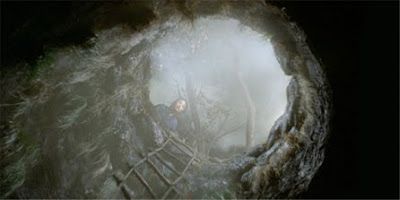 Nagisa Oshima's Empire of Passion involves a plot that could work its way into any average mystery, thriller, or melodrama (and indeed does singlehandedly with Tay Garnett's The Postman Always Rings Twice (1946)): Seki (Kazuko Yoshiyuki), a working-class mother, begins a doomed affair with the 26-year younger Toyoji (Tatsuya Fuji), behind the back of her humble, rickshaw-driving husband, Gisaburo (Takahiro Tamura). Themes such as guilt, passion, dishonesty, and fate almost inevitably bubble up. We expect the adulteress to be placed under suspicion by both her own husband and the people whom she is close with, and ultimately punished for her infidelity. Perhaps we anticipate some violence in one way or another. Oshima is without a doubt aware of the conventions he is working within, and though in several instances he embraces them with open arms, allowing them to guide his film instinctually, Empire of Passion is in many ways a deconstructive effort, a revisionist melodrama that takes its origins through interesting transmutations. The influence of Hollywood is coupled with an equally humble tribute to ancient Japanese folktale traditions, specifically the ghost story, or the Kwaidan. Oshima roots the film in these guidelines only to spin off of them into a stifling exploration of sexual politics, repressive social schemes, and the natural rhythms of small village life.

It is not long before the film dives into the meat of its situation. Without even spending much time on characterization (the narrow exception being a few short scenes in Seki and Gisaburo's small thatched hut, one in which Gisaburo asks her if she thinks Toyoji has eyes for her, the only instance of his suspicion shown by Oshima), we see Seki and Toyoji in the throes of a passionate affair clearly motivated by sex, with love only as an end result. Before we know it, Toyoji has cunningly convinced the gullible Seki that murdering her husband is the only way the two can truly achieve happiness and comfort together. The plan is clinically laid out by Toyoji: Seki will get Gisaburo maddeningly intoxicated on sake after his daily trip into town with the rickshaw, then, once passed out, the two will strangle him with a rope in the interest of expediency and silence. After that, he will be taken into the woods, thrown down one of the several wells that line the village's perimeter, and never be spoken of again. When asked, Seki will say Gisaburo has taken a trip to Tokyo. It's a highly specific plan that we are deliberately let in on, allowing the suspense to be heightened both in the act and in the aftermath, when the close-knit villagers whisper about the continued absence of Gisaburo. We begin to empathize with the murderous lovers without even taking into account right or wrong, because it is there viewpoint which Oshima observes.

A period of guilt and grief follows the murder for Seki, while Toyoji earnestly insists on her acceptance. She is now free from the reigns of what he perceives as an oppressive marriage, instead opened up to a new, more spontaneous manner of love. The unorthodox nature of their affair is mirrored by the extensive age gap which separates them, and also emphasized in an early scene which hints at the Oedipal slant of it; during his routine trip to present her with treats, Toyoji kneels down on the wood floor where Seki is breast-feeding her young boy and playfully ushers him aside, wondering when he gets a turn. It's an odd moment with traces of Freudian perplexity that spotlights the weird mother/son tension between the two and the inherent immaturity that accompanies Toyoji's younger age. Eventually, as years fly by and the collective chatter of the villagers regarding Gisaburo increases (the majority wonder whether he's alive or dead, while Seki indifferently brushes off these inquiries when questioned), the lovers must be extremely secretive about their meetings, even choosing to cease contact entirely at one point. This decision irks at Seki, for it was the promise of salvation and free love (however impermanent and momentary) which lead her to murder her husband. Adding to her disarray is the sudden presence of Gisaburo's sorrowful ghost, who doesn't so much actively haunt her as he does occupy the same space, quietly signaling for a comforting swig of sake in the middle of Seki's hut. However, this deeply disturbs her, so she believes that the two should meet at Toyoji's home, where he lives alone with his mentally disabled younger brother, despite the danger of being caught by one of the police officials patrolling the village, an interrogative bunch lead by the farcically portrayed Officer Hotta (Takuzo Kawatani). Therefore, contrary to the classical femme fatale, it is Toyoji who leads Seki down a troubling path towards murder based on the allure of sex. 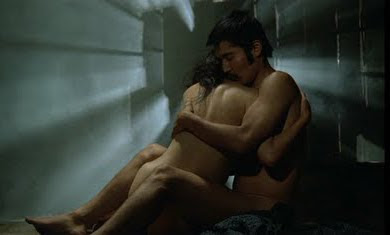 Three quarters of the film is spent on this tense back-and-forth after the crime is committed, with Toyoji and Seki almost always disagreeing on the best steps to take to account for their safety or well-being. This erratic character interplay is guided, and perhaps fundamentally shaped, by the equally unpredictable presence of weather in the film. Oshima hardly ever maintains a natural temporal evolution between the four seasons, lingering on some longer than others, and always acknowledging their impact on the everyday lives of the villagers. Not only does this add uneasiness to the atmosphere, lending it the sense that the villagers understand their life patterns and therefore know one of their own is hiding a secret, but it also requires that we see the lovers in a distinct context each time, forced to make different decisions in different situations.

Empire of Passion's primary visual motif, a circle, seen both in the recurrent shots of Gisaburo's rickshaw wheel and the trademark images from inside the well looking up at the outside, indicates the ourobouric flow of life, that the truth is inevitably encircling the two until it is fully revealed. Yet it also seems that Oshima wants to destabilize that supposed determinacy, hence the erratic progression of the story, as if keeping alive some hope that Toyoji and Seki will be able to find redemption from their crime and transcend the limits placed upon them by the rigid, authoritarian society. And to some extent, they do towards the end when they both argue that the other should survive and therefore free themselves from the suspicious eyes of their peers, while their apparent impending suicides only fuel sexual desires. These acts of selflessness and rebellion are curious hybrids of pleasure (sex and revitalization) and pain (death), echoing an earlier scene when Toyoji begins violating Seki sexually with her son crying in the neighboring room, an action that effortlessly transforms into one that Seki finds pleasure in.

Oshima's visual sensibility is superficially naturalistic, yet a sense of manufactured artifice belies the proceedings, further cementing the influence of Hollywood. For its majority, Oshima sticks to detached, humbly attractive compositions that capture a village that seems perfectly believable: a cluster of warm brown cottages nestled inside lush vegetation and intersected by dirt roads. Once the murder is committed however and the seasons unpredictably shift, a swirling mist begins to find its way into the village. Cinematic techniques are used to emphasize this agitation of naturalism: in a wonderfully eerie scene where the ghost of Gisaburo takes Seki for a ride home on his rickshaw through a densely fogged path, and in a shot when Gisaburo's body is first dumped the well during winter, Oshima utilizes slow motion to great effect. Further pitched away from reality is Toru Takemitsu's typically moody soundtrack, which infuses even the mundane with malign purpose. These elements overwhelm the film's oddly inconsistent narration, spoken with tell-tale objectivity by an old woman, and its sometimes overly histrionic acting. Empire of Passion's fateful conclusion is punctuated by bursts of the macabre, including an especially enigmatic blindness that overcomes Seki in what appears to be a dream state. When the inescapable punishment comes and Gisaburo's corpse is revealed, it is possible that Seki can see for just a moment, forced by the ineffable hand of nature to stare directly at her mistakes.
Posted by Carson Lund at 3:17 PM