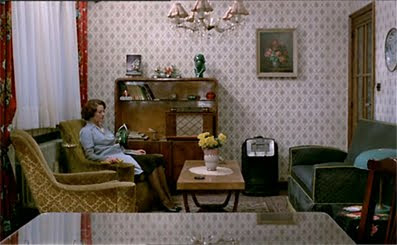 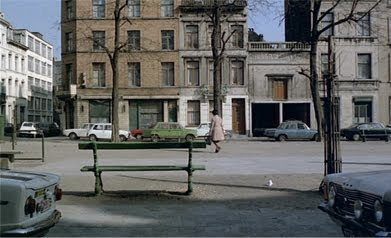 These are the chapter titles to Chantal Akerman's Jeanne Dielman, 23 Quai du Commerce 1080 Bruxelles. Jeanne Dielman refers to the central character (Delphine Seyrig), an orderly housewife working as a prostitute on the side in her own apartment. The second half refers specifically to the location of her domestic space. The nondescript chapter titles comprise the entire action of the story, a documentation of three days - Tuesday through Thursday - in the life of Jeanne, who lives with her bookworm son Sylvain.

It's a film about the tactility of real spaces. The yellow tiled walls in Jeanne's kitchen, where she spends the bulk of her time. The black and white tiles on the floor and the small breakfast table in the middle of it, with two always perfectly positioned white chairs on either side. The bland, patterned gray wallpaper. A perpetually pulsing neon light that diffuses through the window shades in the living room. Muted, retro yellow sofas beside the dinner table. Short, claustrophobic hallways acting as the epicenter in a maze of domestic ennui. Long, familiar streets lined with shops. Plain white cars. And Jeanne's clothes: blank cardigans, turquoise nightgowns, beige button-ups.

It's about the possibility for cinema to construct its own space and time, seemingly congruent with real time yet only existing in three hours. We wonder, watching all of the extended, static takes of real-life chores, where the remaining fifty or so hours went. Akerman toys with invisible ellipses; suddenly, Jeanne is changed into new clothes, or once she's done doing the dishes, she is downtown running errands. Such quiet transitions feel continuous and natural, the filler time in between deliberately left hanging. Rarely does a film feel so in sync with our own lives. Rarely does a film convey through every moment the presence of an outside world beyond the frame, where other people are going about their schedules.

Although superficially simple, Jeanne Dielman subtly provokes questions. Why does Jeanne feel compelled to keep everything so consistently tidy, when it is only her and her son living in the apartment? Why does she turn the lights out every time she leaves a room, a way of further compartmentalizing her already boxy space? Why does she not ask Sylvain about his school day when he comes home and eats dinner, but instead simply recites a boring letter she receives from her sister in Canada? Where do the two go in the night after dinner, an enigmatic action that seems almost obligatory, for they go even when it's especially late? Why does Jeanne keep the money she earns through sex right in the pot on the dinner table? Is it to hide the most secretive aspect of her life in the most obvious, overlooked centerpiece? Why does she house a fellow tenant's baby boy for only five minutes everyday? Why is she complacent with her monotonous life?

The biggest question of all is elicited by one of the most shocking conclusions in film history. Her unexpectedly violent act comes without warning. It comes right after we are finally let into her bedroom during the sex act, after previously being kept outside the door twice, left only to watch the monetary transaction at the door. Following it, Akerman watches for approximately seven minutes as Jeanne sits motionless at the dinner table. She sits in a room with the lights out for the first time in the film, besides when she goes to sleep. Her expression changes in the subtlest way possible. The final face she makes is one of inconspicuous bliss. Has she finally transcended the mundanity of her routine? Did she see herself in the man, caught in a loathsome routine by visiting her every Thursday at the same time? Was the murder an act of male antagonism, forged by the unexplained loss of her husband, or is the act equally unexplainable, driven by a supernatural impulse?

Jeanne Dielman is also a film about routine, about the rhythms of modern life. Jeanne's behavioral quirks often times seem unnecessarily obsessive, but at the same time, what she is doing is wholly indispensable. Sylvain needs to be fed. She needs to eat too. Their clothes need to be clean. The dishes need to be clean. Maybe the beds don't need to be made constantly, but for Jeanne's sanity, maybe they do. Yet simultaneously, the film is about the disruption of routine. During the second day, Jeanne's demeanor begins changing. She drops a utensil that was just cleaned. She overcooks the potatoes. She forgets to turn on the radio at the usual time. Such minor details are extremely dramatic and noticeable given the precision with which these acts were previously carried out. Her change in behavior, though subdued, is frightening.

To be missing the fact that Jeanne Dielman is primarily about film form though is to be missing the point entirely. Akerman explores the limits of what can be conveyed with one static camera angle, a frontal, symmetrical view of the proceedings. She eschews all typical cinematographic techniques that should accompany a film narrative, such as the close-up, the reverse shot, and the point-of-view. She tries to see how basic a story structure can be while still providing tantalizing forward momentum. Her formal rhythm is astounding: the audience begins to expect that there will be three doorbell rings throughout the day, and knows who will be behind the door for each. We also anticipate the coming of a title card, announcing the end of the given day. The effectiveness of this repetition brings to mind Bela Tarr's Satantango, a similarly marathon-like work.

After seeing Jeanne Dielman, I knew a conventional review would not be appropriate. I needed to somehow convey the rapidity with which thoughts ran through my head while watching it. Although it takes patience, it is a powerful, unique experience. It is also a disturbingly applicable one that holds a mirror up to our own lives. Most potently, it shows how a person's life becomes so invested with repetition and routine, yet time still moves forward. And how much of a tragedy that is.
Posted by Carson Lund at 12:53 PM

I just watched this for the second time this year! Powerful movie that really stays with you.

Thanks for a good review! This is a brilliant, enchanting, subversive film.