The Mirror (Zerkalo) A Film by Andrei Tarkovsky (1975) 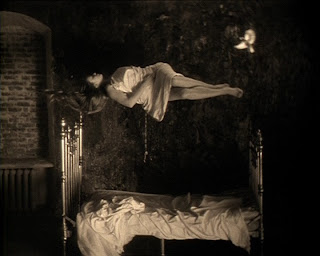 The Mirror is Andrei Tarkovsky's most cherished film, a dense and heartfelt patchwork of recollections, dreams, and newsreel footage placed within the construct of pre and post-World War II Russia. Tarkovsky reveals the film from the hidden point of view of his poet father Arseny, who often recites thoughtful poetry from his deathbed via narration. Arseny's character is shown only briefly; frequently he is in the scene, but Tarkovsky focuses only on the people and events that surround him, resulting in a heavily subjective narrative that shifts extemporaneously with the father's thoughts. There are several times when we see him as a child in a military school, and also scenes when he is completely absent, presumably at war, suggesting that the moments on screen are entirely constructed, and therefore fleeting. It is often genuinely difficult to surmise which character is being studied, or perhaps from whose mind the scenes are being dreamt up. "In all my films, it seemed to me important to try to establish the links which connect people," Tarkovsky once wrote. In The Mirror, he makes one of his most sincere attempts at doing so, justified by his blatant fixation with close-ups and the rich tapestry of real characters he so lovingly commits to film.

Judging by the fondness for his father that Tarkovsky shows in so much of his writing, it is unsurprising to see him literally attempting to navigate his inner being, hypothesizing about his dreams and experiences as if he had truly formed a metaphysical connection. One gets the sense that Tarkovsky did not simply ask Arseny about what should be filmed. He takes his own memories of his childhood in a house by the edge of a lilting grassy field and projects them into his father's. The film traces many of the happenings in the lives of Andrei's neglected mother and her son Ignat (who is supposedly Tarkovsky himself but looks uncannily like his son Tyapa), such as a doctor who sits quickly to chat with the mother on his way to a nearby town, or, most memorably, a quiet fire that envelops a small wooden cabin aside from the house. Margarita Terekhova takes the bulk of the screen time playing the mother, whom Tarkovsky displays ample compassion for, touching upon her frail existence after being divorced by her husband, caring for the children and juggling a job at a newspaper press. Her flowing blonde hair is one of the visual leitmotifs of the film; whether soaked, dry, or suspended in mid-air, it is at the forefront of Tarkovsky's fascination. In this sense, Tarkovsky transmutes the love he felt for his own wife into his father's love for his mother, yet another one of his honest attempts to reach a spiritual understanding of his family. 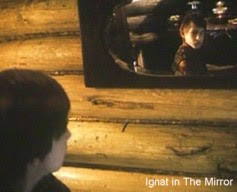 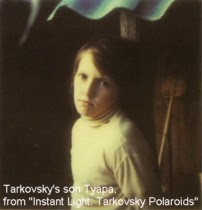 The images in The Mirror, equally as with the rest of his oeuvre, fill your soul with nostalgic warmth and subsequently burn into your mind in a way that few other directors have managed. Much of the film deals with what we perceive as concrete recollections, but when dream logic begins to set in, Tarkovsky provides us with some of the most sublime shots in cinema. Perhaps the most disconcerting is a scene that involves his mother soaking her hair in the middle of a dank room of the house, however the room looks separate from reality, a heavenly room with water soaking and running down the entire interior. She rests for a moment with her hair drenched, covering her face as the camera pulls back slowly to watch chunks of the saturated insulation drop to the floor in ever so slight slow motion. In the corner of the room, she approaches a mirror only to see her mother (Tarkovsky's grandmother) staring back at her. There is also a shot that creeps scrupulously through a dark room with open windows, the wind blowing the shades back majestically as a young boy tiptoes towards another partly covered mirror. Wind recurs schematically throughout The Mirror, whether figuratively washing away the momentary relationship of the mother and the doctor or acting as if alive in the forest beside the house, casually knocking a glass bottle off a circular table. Tarkovsky's propensity to slow down the shots minutely while leaving the sound in real time lends these moments an airy, spiritually lucid quality. 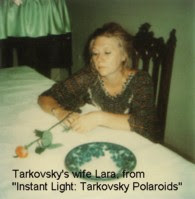 Mirrors are, as the title suggests, an essential symbol to take into account in digesting the film. During a scene in which the mother and Ignat visit the house of an unidentified woman expecting a child, Ignat is left alone in a room where he finds himself staring at a mirror. He looks long and hard at it, assessing his soul. It seems he is questioning his very identity, for he has grown up in a jostled wartime, periodically splitting off from his father. When asked by the woman upon return what his name is, he does not respond with his true name. Mirrors act as entities that bring into examination one's spiritual identity. At one point, Arseny's character couples the images with a poem about souls growing tired of being trapped in their physical bodies. Therefore, it appears there is a theme of escapism in The Mirror, which likely turned off Soviet officials as much as the film's unconventional approach. Tarkovsky shows newsreel footage depicting the war, only to follow it by the composition of the family in eternal embrace upon the father's return. It is evidently the war - more than personal differences and hardship - that jolted Tarkovsky's family.

Although Stalker struck me with a greater visceral impact, there is something extremely intimate about The Mirror. A hefty portion of the middle of the film leans towards ponderous, but it is held together by the sense that Tarkovsky lived and died for each frame of film. It is the dedication that he has to evoking memory, dreams, and the states of human consciousness in between which allow the film to stir up so much warmth, familiarity, and unease in its viewers. The film plays almost like a companion piece to his debut Ivan's Childhood, with its predilection to the personal effects of wartime, although it's leagues more subjective. Tarkovsky's poetry is as deep as ever in The Mirror, and admittedly I have only created a sketch reading of it. I hope to see it several more times to expand my appreciation of this pure piece of cinematic art.
Posted by Carson Lund at 9:18 PM

i just lent this film to the coauthor of my blog along with Stalker, indeed a great film that embodies poetic filmmaking, one I need to watch many more times as well