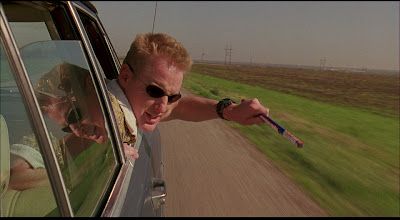 While at the University of Texas, roommates Owen Wilson and Wes Anderson did not necessarily have plans of making several films together. However, when they co-wrote the short Bottle Rocket in 1994 and received accolades at Sundance, their plans changed. This gave them the possibility to make the feature-length Bottle Rocket, which was the first burst of energy out of the collaboration.

Owen Wilson plays Dignan, a twentysomething who escapes from the nuthouse he's stationed in to jump impromptu into an ill-prepared life of crime with his friends Anthony, played by Owen's brother Luke Wilson, and Bob. When the gang's first attempted robbery succeeds, albeit clumsily, they hide out at a motel on the side of a vast strip of land where Anthony woos the Spanish maid Inez. Communication between the two is nearly impossible, allowing Anderson to find drollery in Anthony's earnest attempts at cheering her despite the fact. He follows her closely around the symmetrical corridors of the complex (ones that, with their peachy red color scheme, are characteristic of Anderson's milieu), even slipping into the rooms with her to fluff a pillow or two, much to the patron's confusion. Anthony assumes Dignan's jealousy, and when Dignan hears through a translator "tell Anthony I love him", one can imagine something else at work in Dignan's decision to keep hush about it until later in the film.

These minor moral predicaments - Anthony's subtle lovesickness after he leaves the motel, Dignan's uncertain thirst for criminal success, Bob's brother difficulties and troubles with the law for sustaining marijuana in his backyard - are ironically underplayed by Mark Mothersbaugh's carefree ditties, assuring the film never dips into weighty themes. The Devo frontman has brought zest to each of Anderson's films, although in Bottle Rocket it is probably the lesser performance; the songs sound as if they've been extracted from a company learning video. Anderson's visuals were not yet refined in his debut either. Stage-like compositions are not as abound, and the informational overhead shots are few and far between. Often times close-ups feel amateur; for example, the characters are frequently placed on the wrong side of the frame looking out with no lead room. Nevertheless, one can sense his style beginning to take form, and if anything, Rushmore was a great leap.

Whereas the camerawork may be primeval, the themes and sets are noticeably Andersonian. The yellow jumpsuits that are worn in the film's semi-climactic (and most hilarious) heist are reminiscent of the uniform orange hats worn by Team Zissou in The Life Aquatic, and the bromance that ensues between Dignan and Anthony shares the same foundation of that of the three brothers in The Darjeeling Limited. Male bonding - forged through hilarity and absurdity - is common in Anderson's work. Bottle Rocket never feels fully inspired, but in its successful dryly comic moments, it can be seen as a strong primer for the wonderful films that followed from this great young American auteur.
Posted by Carson Lund at 9:37 AM

The very fact that you call people auteurs means you should die.

http://www.theauteurs.com/cast_members/1150 ...well then thousands of people should also die. Not only do they refer to directors of great merit as auteurs but they are also a world-wide community devoted to these auteurs, their incalculable contributions to filmmaking, their unforgettable oeuvres, etc...snebert can you believe their website is even called the auteurs?!