The Limey (1999) A Film by Steven Soderbergh 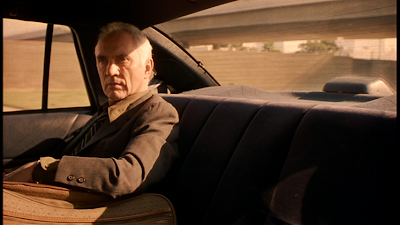 If Steven Soderbergh divies up his career into commercial filmmaking (the Ocean's trilogy) and more artful projects (Bubble or the Tarkovsky remake, Solaris) 1999's The Limey occupies a space neatly in the middle. It's somewhat of an expected thriller plot, but his revival of two 60's countercultural actors, Peter Fonda and Terrence Stamp, and by extension his archival use of footage of a free-spirited Stamp in a Ken Loach picture - not ironically also named "Wilson" - adds a dimension of the personal to Soderbergh's project. As well as attempting to paint a discombobulated portrait of loss and revenge, Soderbergh appears to be hinting at the pliancy of the physical careers of Stamp and Fonda themselves. Their characters in The Limey feel like aged extensions of those they played in films like Easy Rider and Billy Budd, after enduring years of near hyatis.

Terrence Stamp delivers an impressively subtle performance as Wilson, a grey-haired Brit who is released from prison for armed robbery after receiving a letter from his friend (Luis Guzman) about his daughter Jenny's death. He is certain of it being a murder, and is suspicious of Fonda's character Terry Valentine, a rock record producer involved in a heroine gig with a group of trucking business gangsters. Wilson knows Valentine's ability to rake in beautiful woman given his numerous mouth-watering homes, so he pursues him at all costs once learning loosely of a relationship he had with Jenny from her voice coach, who becomes one of Wilson's helping hands throughout the film. Savage revenge looks like an act of duty for Wilson, as he makes expedient work of nearly everyone who gets in his way, but this may give the impression that he is a ruthless headcase. In truth, his tender side incessantly comes to the fore a la quiet moments of introspection; soundless bits of imagery, treated to appear as if rapidly disintegrating, flash on screen nearly every time Stamp is alone peering pensively into nothingness.

While such scenes border on the sentimental or perhaps familiar, the rest of the narrative is engineered with temporal disassociation. During conversational scenes, the dialogue will often kickstart before the subject begins cuing up, almost as if some of the words were simply preemptive thoughts before speaking. There are also scenes that are damning in regard to the film's style; when Wilson and the voice coach meet up and sift through their thoughts, their fluid conversation is intercut line by line in three incongruent settings. All of this leans towards gratuitous stylistic flourishes, which if any is the key problem in The Limey. Soderbergh's obscure editing style, which even replays the same events multiple times with minor changes, often points towards a film with a more jack-in-the-box denouement, in the vein of Memento for instance. However the climax, which has Fonda held at gunpoint, is strainingly impermanent, and it becomes clear that Soderbergh's apparent primary interest in a meditative character study is shrouded in its own emphasized narrative treatment. Notwithstanding these occasional fumbles, the film is intriguing if entirely for Stamp and Fonda's comeback performances and the superb score that underplays them.
Posted by Carson Lund at 6:22 AM