Fantastic Planet (1973) A Film by René Laloux and Roland Topor 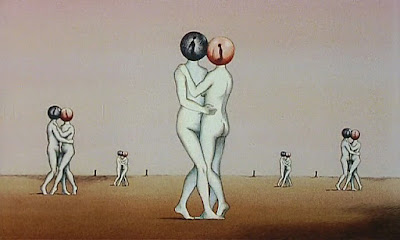 "Fantastic Planet's blend of straightforward, almost elementary storytelling (any missing context is filled in via a voiceover by Jean Valmont as the adult Terr) with heady themes and eroticized imagery marks the film as a relic of an era with much looser standards around the dichotomy of the children's film and the adult drama. Also pinning it to the early 1970s are the unmistakable assimilations of psychedelia into the Ygam ecosystem: The Draags nourish themselves by sidling up against sproutings of plant life and inhaling for extended periods of time, after which their souls, encased in tiny orbs, rise upward to attach to headless naked bodies, which then proceed to tenderly embrace. Casually liberated sexuality runs rampant on Ygam, from the female Oms whose breasts hang freely to the various phallic and vaginal estuaries in the landscape. Even the Oms' rocket ships, which propel them to one of Ygam's moons in a tactical effort to evade the Draag's gassing assaults, leave no question as to what their shapes are meant to evoke."
Full review here of the Criterion Collection blu-ray.
Posted by Carson Lund at 10:11 AM