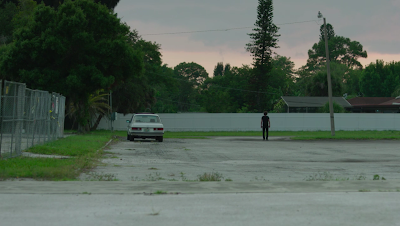 "The first four images of Dark Night, Tim Sutton's contemplation of civilian gun violence in America, have a fragmentary precision that's gutting. First, a girl's eye is studied in close-up as red and blue light—seemingly the incandescence of either a movie screen or fireworks—flashes over it. Then, streaks of refracted red light blink rhythmically across the top of a dark frame, forcing us to reconsider the source of the initial glow as potentially that of a police siren, followed by a shot of a larger red smear, underneath which a distant American flag slowly waves. This sequence is capped off by a wider angle of the girl, who's sullenly slumped on some grass at the side of a road as the unfocused legs of onlookers bob in the background and ambulance sirens creep into the otherwise hushed soundscape."

Full review here.
Posted by Carson Lund at 10:54 AM