The Informant! (2009) A Film by Steven Soderbergh 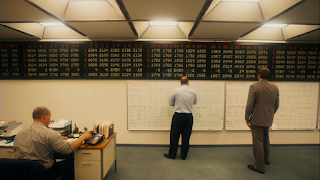 Steven Soderbergh is (or, as of two days ago when the filmmaker premiered his latest and alleged last at Cannes, was, depending on whether or not you take his statements of retirement to heart) a Hollywood artist – that is, a paradox. "Hollywood," of course, pertaining to an industry (as well as a place) and "artist" entailing creative, individualistic expression. Even as Soderbergh has participated for 20 years in an industry of deceit and corporate cynicism, he has always expressed through his work a critical distance from it. Never has this paradox been put to better use than in The Informant!, a film about corporate dishonesty that is itself dishonest. The film concerns Mark Whitacre (Matt Damon), the very embodiment of a contradiction in that he is a compulsive liar as well as the informant of the film's title. Mark is an upper-level manager for ADM, a multinational lysine developing company, who blows the whistle on his company's illegal price-fixing tendencies and winds up working for the FBI, covertly tape-recording various business meetings throughout the world.

Generally speaking, the bulk of Hollywood narrative cinema has historically been driven by character psychology. The Informant!, meanwhile, is driven by an abstract process: that of a global business infrastructure. Released the same year as The Girlfriend Experience, another of Soderbergh's very best and most daring films, The Informant! watches as Damon's character, like Sasha Grey's, follows the demands of his occupation. In both films, the subject is at once near and far, constantly observed yet unknowable. Soderbergh sustains such intimate visual attention on Damon and Grey that the movies become catalogues of their physical mannerisms and ways of speaking and forming sentences. The Informant! even incorporates voiceover of Mark's free-associative contemplation, which sits in nearly uncomfortable sonic clarity atop the rest of the mix. Despite this superficial closeness, however, the studied focus in these films on occupational processes strands these characters in a cocoon of abstraction. They seem to think, feel, and act only according to their role in a capitalist system. For them, work is not merely consuming their lives; work is life.

Soderbergh cleverly establishes this truth in The Informant!'s opening moments. Mark is prattling on about the omnipotence of corn in various food products, and the sound of his voice – soft, warm, and deep, as if it was recorded with Damon's mouth a centimeter away from the microphone – gives the impression of an extra-diegetic source, of Damon speaking directly to the viewer. Suddenly, this voice confronts the viewer by asking "do you?" after posing a question about what makes the "big, green bags biodegradable," but upon this utterance the aural quality of Damon's voice becomes roomy and mid-rangy. Soderbergh cuts away from sunny images of corn fields to the interior of Mark's bright red car, where his son responds to his riddle: "corn," he assumes. "Corn starch," replies Mark. "But Daddy's company didn't come up with that one." This destabilizing intro establishes that Mark's line of work has seeped into both his thinking patterns and his family life. The film continues to interweave internal and external until they are one and the same; often times, Damon's narration butts in right when it appears he's about to begin talking to another person. 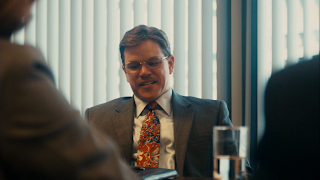 This opening gesture is so subtle that it barely registers as any kind of directorial "comment" on the character. A film with a more harshly critical view of this type of subject might have taken a more forceful route, but The Informant! never quite adopts a cynical perspective on Mark. In these opening stages of the film, and indeed for much of its runtime, Mark seems a perfectly affable, logical, trustworthy, and morally strong individual, albeit a bit eccentric and out-of-touch. The film's surfaces reflect this easygoing demeanor. There's the happy-go-lucky sheen of Marvin Hamlisch's afternoon jazz score, reminiscent of the composer's work on the early, funny ones of Woody Allen. Pleasant, shimmering colors pop from the mise-en-scène. Crisp digital edges – the film marked Soderbergh's third use of the Red One camera – are softened with a Pro-Mist filter, which lends bright areas of the frame an ethereal glow. Dark shadows in the daytime are kept to a minimum. The film's ambient, consumer-friendly aesthetic erects an ironic stance on a crooked narrative of hidden motives and competing intentions, making it genuinely difficult to decipher a consistent tone: is it farce, dark comedy, morality tale, or drama?

As the film moves from office room to office room, international city to international city, and airport to airport connected by the physical resemblances of the locations and the breezy dance of Hamlisch's score, there's a sense in which Mark's life has become a transparent cycle of the same thing over and over (in a world where everything seems to look the same, whether it's Paris, Mexico City, Zürich, or California). Herein lies both the beauty and the strangeness of The Informant!: in a system of such clarity, redundancy, and predictability (both the film and the corporate occupation), how is it that Mark's considerable violations of protocol go unnoticed for so long (by both the audience and the executives and FBI agents with whom Mark routinely interacts)? 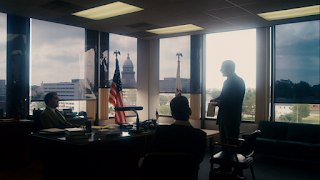 In attempting to answer this possibly unanswerable question, it's worth considering the precarious balancing act created by Damon's Midwestern Everyman, the same type of figure so often skewered by the Coen brothers. Soderbergh avoids that pretense in favor of a more roundabout critique. Mark is an automaton, albeit one who is ascribed different character traits at different points of the film. First are qualities of American moral exceptionalism: commitment to family, old-fashioned work ethic, dedication to a job efficiently and responsibly done, and seeming resistance to corporate opportunism. But Soderbergh spends so much time focusing on Mark's actions that the film doesn't so much investigate these aspects of his character as lay out surface-level indicators of them (a suburban home, a well-tailored suit, a generally affable and articulate demeanor) and rely on their iconic, predetermined meaning. As the film continues, begging for a more specific detailing of this character, Mark paradoxically becomes more distant, more mysterious, until it's difficult to reconcile the good-natured atmosphere built up around him with the contradictions and lies that Soderbergh gradually enters into the narrative.

This task is even further complicated by Soderbergh's stark delineation of the human and the corporate, a dichotomy that merges into one in the film's final act. Mark's mental wanderings – the most obvious way in which the audience is invited to join his headspace (if never to fully share his perspective) – defiantly don't conform to any traceable psychological path; vague, divergent, and random but unmistakably human, they are treated as a low frequency hum of not-quite-useful mental information, a sonic texture that contrasts harshly with the schematization (visual, aural, informational) of the world around him. Soderbergh makes no attempt to render the business details of the plot in a palatable manner. Everything is relayed in dense thickets of financial jargon and corporate logic. The very fact that we have access to a single individual's consciousness amidst this never-ending verbal overload from suited, drone-like businessmen establishes a sense of Us vs. Them in which Mark's charming and rather goofy thinking patterns are pitted against the professional order around him. Soderbergh reinforces this sense of order by having the same groups of executives and special agents reappear like clockwork for meetings with Mark; it's a well-oiled and sharply organized world of business that Mark participates and thrives in. 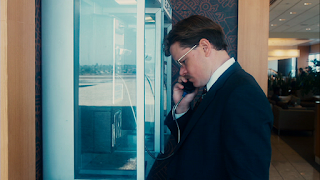 It seems impossible, however, for a man with such a high level of involvement and respect in this company to be free of its patterns of behavior. As Mark's head FBI associates (played with steely precision by Scott Bakula and Joel McHale) start to detect inconsistencies in his story and suspect him of criminal activity, the investigation turns away from the possible price-fixing offenses of ADM and towards those of Mark himself. Soderbergh's cool, orderly mode of address, however, as well as the specialized language used by those investigating Mark's actions, remains the same. Mark is thus treated as just another blip in the business plan, not an individual who is separate from the company but someone to point to as a substitute for larger corporate issues for the sake of convenience. The realization that Mark is a liar, therefore, doesn't expand our understanding of the character as an individual but rather folds him into an unwieldy web of corporate deceit, leaving the audience without stable ground on which to relate. Mark's pathology – identified at the end of the film as manic depression – is understood less as a psychological abnormality than as a metaphorical side effect of participation in the corporate world, where corruption is not just about price-fixing scams and breaches of protocol but also about the very fact of seeking the impossible task of dividing one's identity day after day between two competing impulses: a human one (home life, family life) and an abstract one (capitalism, finance, business).

In pulling this brilliant, thematically rich fast one on the audience, The Informant! lies too, and Soderbergh is therefore complicit in the methods of the very industry he is trying to subvert. The film makes this sly point without calling too much attention to itself, and indeed, as a whole it's so brisk and entertaining, so agreeable to the casual viewer with its bouncy rhythms and eye-catching but unprovocative visuals, that it hasn't the time nor will to openly announce itself as the multi-faceted political statement that it is. It's too busy tucking its commentary into unassuming, even conventional narrative beats, such as in the final "where are they now?" montage that concludes the film, where Mark is cited as having secured another high-paying corporate gig. What's probably one-dimensionally uplifting in another film stands out here as a blind continuation of past misdeeds, a way of portending future financial corruption. If The Girlfriend Experience was an attempt to find the human within a capitalist system, The Informant! reaches a more complex, possibly darker conclusion: in a capitalist system, the human has been distinctly altered.