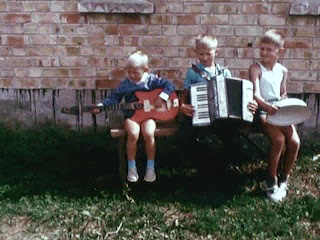 Nostalgia for the Light (2010): To synopsize Patricio Guzman's Nostalgia for the Light is to do a disservice to the film. It's more appropriate to note something more indisputable, like the fact that the film is set in the Atacama Desert of Chile. From there, Guzman's camera is like a butterfly net, catching fragments of the unanswerable questions raised by the land and swept around by the relentless wind. Early on in the film, one of the scientists Guzman interviews claims that in his field the answer to one question usually yields four more questions, and it's almost as if he's describing the film's approach. Structured not as a narrative imposed upon life in search of a single truth but rather as a broadening inquiry into a self-generating cycle of themes, Nostalgia for the Light contains an intellectual rigor that has been in short supply in the contemporary documentary film. Everything is treated as a continuum and nothing is isolated: science leads to history leads to politics leads to collective identity leads to collective memory.

Reminiscences of a Journey to Lithuania (1971-1972): Every time Jonas Mekas rolls the camera it's an impulse to try to capture everything and not forget anything. As such, this series of reminiscences, which chronicles Mekas' return to his home village in Lithuania after years in New York City, has a deep delicacy and sadness to it, a feeling of the images being only a sliver of time and space, the remainder of which is forever a casualty to Mekas' consciousness. Coupled by the filmmaker's gentle narration, relayed in broken, charmingly primitive English, the film's episodic structure marks an attempt to comprehensively catalogue a period of time rich with complicated emotion. Of course, Mekas knows full well that such a task is fraught with the weight of his preceding absence from his family. The past cannot be regained, but cinema can try its best to envelop the present.

Plumbline (1968): To distraught boys and girls of the YouTube generation: THIS is what a breakup film should look and sound like. Carolee Schneemann's subjective 16mm chronicle of the dissolution of her relationship is angsty in the best ways, its repurposed homemade footage and layers of superimposition exploding with passion, anger, and heartache. Among other inarticulate noises, on the soundtrack is the whining of Schneemann's kitty cat, seemingly an anthropomorphic surrogate for her own struggle.

Letter to Jane (1972): What can be found in a single image? What ideological presumptions rest beneath the surface of even the most seemingly neutral photograph? With a mixture of genuine intellectual epiphanies and scientifically justified but tedious spitballing, Godard and Gorin prove that the answers to these questions are, or can be, infinite. The film ends after 52 minutes, but every question these two pedants pose branches off in a myriad of directions, stimulating turbulent searches for answers that only spawn more discursive questions. The fundamental question, then, is: is there an answer at all? More than a nifty critique of the American mass culture formula, Letter to Jane is a demonstration of the self-perpetuating nature of abstract logic.

Reflecting Pool (1977-79): In a sunny patch of forest, bodies dissolve and reincarnate, a surface of water ripples and stalls according to unseen forces, and the image vibrates with a mysterious stillness. An eerily beautiful, painterly use of early analog video technology as a record of ghosts. 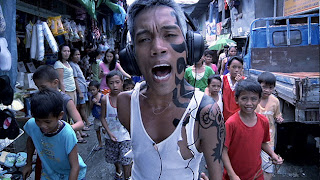 Mondomanila (2012): A rare thing in cinema, or at least a rare thing to see the light of day in American cinemas: a film about grinding slum life that refuses to condescend, simplify, pity, or hastily polemicize its subjects. Set in the titular district of the Philippines, Mondomanila is a low on budget but high on ingenuity ensemble cartoon that leavens its dire, disturbing subject matter every step of the way with punkish irreverence and a truly perverse sense of humor. The film stands in a tradition of grotesque surrealism that runs from Buñuel to Waters to Makavejev to Jodorowsky, yet I've still never seen anything like director Khavn De La Cruz's anarchic hybridization of genres (crime thriller, romance, musical, music video, social realism, fantasy, infomercial) and styles (at any given moment the film could be using a different camera, I honestly can't tell, and they cycle through hypersaturation, monochrome, slow motion, slow shutter speed, stills presentation, security cam, and queasily claustrophobic handheld). Reminiscent of City of God in the way it episodically introduces a community of wacked-out characters (a drug-addled young rebel, a mad goose-fucker, a one-armed rapper, a midget pimp, a flamboyant shoe-shiner, a fierce mother fighting against the impending foreclosure of her shanty shack, a hateful old Yankee), Cruz dips in and out of their stories with reckless abandon before connecting them all – regardless of whether or not they survived the plot's violent mayhem – in one final musical send-off.

See You Next Tuesday (2013): (Written as a blurb for a screening.) Familiar with those inebriated train wrecks who show up at parties and elicit raised eyebrows, or, worse, cause outright mayhem? Emerson College alum Drew Tobia places such people front and center in his latest feature See You Next Tuesday, a funhouse of dysfunction located within the cramped apartments, nondescript grocery stores, dingy dive bars, and sterile AA meeting halls of Brooklyn, NY. As the implicitly naughty title suggests, Tobia’s not gun shy when it comes to pushing buttons, and nearly every taboo that can still be breached in today’s increasingly risky culture is breached in this story of a self-destructive pregnant twentysomething, her techno-punk lesbian sister, and their unapologetically profane mother. Charged with crisp digital imagery, a feisty score, and intensely committed performances, See You Next Tuesday’s finest asset is its ability – even after prying open the gates of hell – to extract a core of human mishap out of this downhill spiral; what emerges is a surprisingly convincing portrait of already rough circumstances getting perilously, and almost irrevocably, worse.

From Up On Poppy Hill (2013): (Written for the Boston Phoenix before the company folded recently.) From Up On Poppy Hill hails from director Goro Miyazaki, the son of the more famous Hayao, but his directorial debut nonetheless has less in common with his father’s body of work than it does with another precedent in Japanese film history: the quiet, restrained family drama of Yasujiro Ozu. The film’s lovingly drawn images – of boats floating on water, trains darting towards the horizon, and smokestacks chugging away – punctuate a simple tale about two young students caught in the crosshairs of the impending demolition of their school, a cynical government ploy that will make way for the 1964 Tokyo Olympics. Arguing that to do away with the school is to neglect the educational value of history, the political merges with the personal when an old picture of a deceased Korean War soldier dredged up in the protest suggests the boy and girl may actually be siblings. Miyazaki’s effort here may not reach the fantastical heights of, say, Spirited Away, but it’s still an earnest little film with its head in the right place.

American Movie (1999): If by the end of the year Mark Borchardt remains my favorite comic discovery of 2013 I won't be surprised. Borchardt's thick Midwestern accent, expletive-littered vernacular, abiding love for cheap beer, seeming lack of self-awareness, and old-fashioned hatred for mass culture and 9-5'ers (as well as the cast of characters around him that echo aspects of his persona) is so hysterical, his one-liners and physical behavior so well-timed, that I question the extent to which Chris Smith's documentary is actually unstaged, unvarnished vérité. Not that it really matters, because American Movie is one of the best comedies of the nineties regardless. 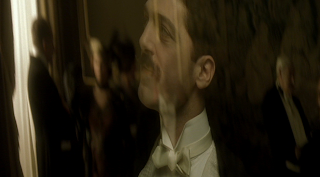 Mud (2012): While watching Mud, the sound of the collective heaves and exhales of a packed house obviously overeager to get the most of a free preview screening moved in perfect sync with every stale plot beat flowing like clockwork from writer/director Jeff Nichols' keyboard. Their reactions only exacerbated the film's maddening conventionality. Mud presents a feisty Huck Finn type who's in it for the express purpose of transforming from boy to man and a hideaway murderer who gets a pass because he genuinely loves a motel-dwelling blonde vixen. In the path of their pursuit of moral self-righteousness is a gang of bounty hunters who we know are bad because the leader has over-gelled, slicked-back hair and because the minions are fat, watch TV, drink beer, and pray for death. All of this is set against a sun-bleached Arkansas milieu as stereotyped as it is desperate to convince. (Oddly enough, a film that's so hell-bent on concocting a seemingly authentic sense of texture and place also has some of the shoddiest gaffing I've seen in an otherwise handsome film in quite some time (feel free to correct me if you've ever seen a campfire flickering enough to induce epileptic fits).) A limp study of denial, forgiveness, and masculine sacrifice, the film is only Catholic in the most superficial, pandering ways (a climactic image of said murderer floating underwater towards a glistening patch of sun is nauseating in its kitschy grandeur) and only cathartic at the expense of erecting absurd good-bad dichotomies. Mud won't make me avoid Nichols' earlier films altogether – critical acclaim has to come from somewhere – but it certainly will loom like a dark cloud over them.

It May Be That Beauty Has Strengthened Our Resolve: Masao Adachi (2011): Communication between two artists. A film that finds its own structure and rhythm as it's made, that responds intuitively to subtle changes within the filmed space. Grandrieux makes nothing less than an effort to sync his own consciousness up with that of Adachi, to meld two ways of looking at the world into one. The thrill of the film is not the extent to which this harmony is achieved (at a certain point, it's impossible no matter how close Grandrieux's sinuous camera gets to Adachi's face), but rather the glimmers of intellectual epiphany that come out of the attempt.

Night Across the Street (2012) and Time Regained (1984): Often resembling an amateur community theater production committed to crude digital cameras, what Raul Ruiz's swan song Night Across the Street lacks in technical gloss it makes up for with the worn wisdom and fidgety poeticism of a dying man. The movie's ultra-crisp digital flatness lends a strange hyperreality equal parts hypnotizing and awkward to Ruiz's dream structure, as well as a sense of immediacy that makes the film's odd diversions feel like genuine epiphanies worth sitting up straight for and listening closely to. Time Regained, on the other hand, is just a magical cinematic vacation, a film whose plethora of novel aesthetic and storytelling ideas more than justify its supposed failure to do justice to Proust. My favorite moment: a mid-film classical concert in which an entire roomful of intelligentsia as well as decorative set objects literally start shifting around the space as if floating in mid-air to the sublime music. In a narrative sense, I found myself blissfully lost during both of these films, but it's precisely this dreamy sensibility that makes Ruiz's themes and emotions crystal clear to me.

Utamoro and His Five Women (1946): Kenji Mizoguchi's 1946 drama about Edo-period woodblock print artist Kitagawa Utamaro could complete an unlikely double bill with David Fincher's The Social Network. Two films about young, eager, and brilliant minds seduced by the urge to memorialize and ultimately commodify an impulsive emotion; Zuckerberg uses a social networking website and Utamoro a physical canvas. Both directors incorporate an exacting mise-en-scène that favors deep space, a modestly virtuosic moving camera that accentuates drama, and a Kane-like rise-and-fall narrative structure. Both pleasantly traditional storytelling, both sad movies about sympathetic characters caught in the crosshairs of societies placing value on consumerist impulses.