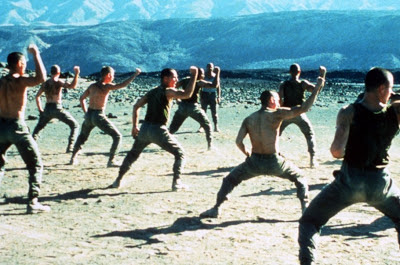 After Holy Motors, it's hard to imagine a cinematic scenario where Denis Lavant would not upstage anyone and anything around him. It's to his credit, then, that even in Claire Denis' Beau Travail, a film that ultimately treats him as more of a texture than a character, he commands the mise-en-scène with every gesture, every subdued expression, every dart of the eyes. His is an invertebrate sort of body capable of contorting to the every desire of his director, yet Denis mostly restrains his expression, reducing his limber figure to sharp, controlled movements. That is, until Lavant's acrobatic explosion in the final shot of the film, dancing to Corona's bouncy 90's hit "Rhythm of the Night" on an empty, dingy dance floor.

The transition between these two kinesthetic representations of Lavant's character syncs up with the larger thematic progressions of the film (what exactly to make of Lavant's dancing, however, remains unsolved, aside from the fact that he's a fabulous dancer and it's a terrific punctuation mark on the film). For the majority of Beau Travail, Lavant, playing a downbeat and solitary man named Galoup, is recalling his time as the officer of a French Foreign Legion outpost in East Africa, a time in his life marked by a mixture of pride, self-worth, and inner turmoil. In its last ten minutes, however, the film shows Galoup back in France after being dispatched on account of treason, a section that embodies what are potentially the only present-tense moments in the film (though with Denis, past, present, and future are always porous and somewhat negligible entities). This dynamic between a sense of community in a foreign land and a sense of outsidership in a native country, as well as between comforting routine and intimidating freedom, hangs over the film as heavily as the dust and sweat that cover its every surface. 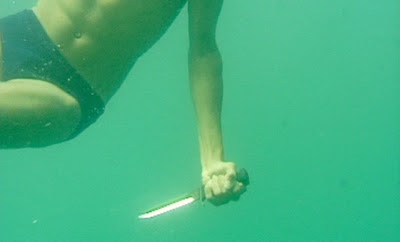 There's a narrative deeply embedded within Beau Travail – inspired, no less, by Herman Melville's novella Billy Budd – but Denis obscures it in such a way that its vibrations are felt rather than telegraphed. It's utterly simple and goes something like this: Galoup remembers how a charismatic young recruit named Sentain (Denis regular Grégoire Colin) aroused jealousy in him and came between his love and respect for Commander Bruno Forestier (other Denis regular Michel Subor). This tension ultimately drove both Galoup and Sentain away from the Legion, compromising a tight-knit group of male expats. What Denis does with this mythical template is distill it down to remembered fragments that are then strung together according to the disorderly logic and speed of the subconscious. Of course, our brains don't file memories into clean-cut narratives, nor do they pinpoint the moments of time normally construed as character development. Therefore, the film resembles a murky mirage of images and sounds whose overarching shape is only decipherable in retrospect.

This is the essence of Denis's cinema, and, it could be argued, one of the modes of expression completely unique to the medium. Beau Travail's construction is fluid and organic; there are no cues, dramatic or aesthetic, that suggest what shot will come next (what else could explain a hard, unexpected cut from the shadowy outlines of club dancers to the elegant swimming body of Sentain, or from a wide shot of Lavant's stiff silhouette in front of the African desert at dusk to a sweeping pan going against the slow, turquoise ripple of the Indian Ocean, moments that arrive with no traditional cinematic "preparation"). The audience is suspended in a state of submission, privy to the movements of a consciousness that is not its own. Yet at the same time, Galoup is an intimate guide, the most permanent source of connection within the film. His wistful inner monologue crops up now and then as voiceover and Denis's camera (also known as the great cinematographer Agnes Varda's camera) stays close by his side, taking in the totality of his body from its frame to its pulsating veins, and in one haunting instance he even stares directly at it. The result is a great form of seduction, a thrill of living vicariously through a character without grasping his logic (it's also, to varying degrees, the thrill of watching Tarkovsky's Mirror or Watkins' Edvard Munch). 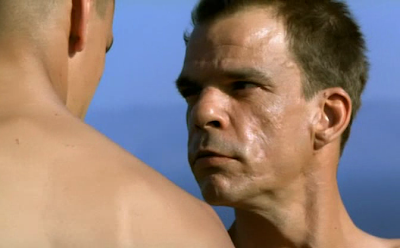 In a film about a military camp based in a colonial setting surrounded by women and children (Denis – or should I say Galoup? – captures with eloquence the curious gazes of African onlookers only peripherally considered by the legionnaires), the effect of this cinematic approach is to sidestep outright polemics while also offering a glimpse into the existential cost of such a political scenario. Denis codes the theme of colonialism into the Legion itself, with Galoup – a character defined by frustration, yearning, and misremembering – representing a concentration of the contradictory group ethos in the role of the leader. There are also visual hints throughout the film to the insularity and fragility of this community: long, flattened shots of the men seen through a telephoto lens that makes them appear as if they'll disintegrate in the desert haze, recurring images of them in and under water, as stripped of clothing as they are of their defenses, and camera angles that arrange them in geometric patterns against the ground, divorced from an outside context. When Galoup is finally cut off from the group, he merely moves from one imagined sense of belonging to another, larger one: the nation of France itself, at this point something of a foreign country to the migrant commander.

Denis is a director who deeply understands the psychological functions of these processes of political and geographical assimilation and re-integration, and Beau Travail reflects this complexity with style and economy. Indeed, Galoup's knee-jerk disdain for Sentain when he enters the group is a built-in emotion whose associations with colonialism and foreigner/native dynamics in general are hard to ignore. Denis never drives such points home though, instead letting them arise slowly from the surface of the film. The result is a remarkably rich viewing experience that is embedded with more sophisticated ideas, evocative images, and mysterious juxtapositions in 90 minutes than many directors accomplish in their entire careers.