Out of Sight (1998) A Film by Steven Soderbergh 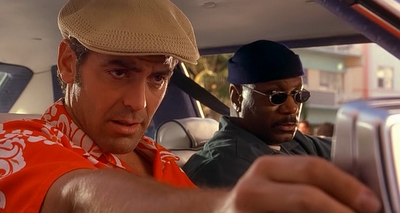 The characters in Steven Soderbergh’s films are often defined by a particular moral code and the extent to which they’re willing to bend or break it. Out of Sight, a brisk, stylish popcorn movie that belongs to the more commercial half of Soderbergh's directing persona but is just as distinctive as the rest of the his output, offers a poignant expression of this theme in the shape of an illicit romance between Jack Foley (George Clooney), a charming bank robber, and Karen Sisco (Jennifer Lopez), the US Marshal on his tail. Inherent in the premise are romantic comedy as well as crime thriller undertones, and Soderbergh plays each out to its logical extreme without ever making the film fit squarely in one genre. A master of tone, he is instead able to infuse the breezy two hours with an unrelenting sense of tossed-off cool, lending a feeling of detachment that is both comic and haunting. The result is a work that points ahead to Soderbergh's star-studded Ocean trilogy even as it attains a dramatic gravity never quite reached by that slick franchise.

In fact, the Ocean movies may have never occurred had Soderbergh not detected and exploited the oozing charisma of George Clooney, which provides the fuel that runs Out of Sight and ultimately so many of the actor's subsequent films. (This is not to say Clooney hadn't already proven his chops in film and television (I haven't comprehensively surveyed the actor's pre-'98 career), but that Out of Sight was ostensibly the first major motion picture to place so much stock in his low-key magnetism.) As Jack, Clooney is compulsively watchable; confident, quick-witted, level-headed, and forever armed with flirtatious banter or silencing one-liners, he's able to make even a death threat in the midst of a bank robbery sound comforting and easygoing. It's obvious that a man this affable couldn't find himself stuck in jail for too long, though he does get arrested early on after an impulsive inner-city robbery that the film eventually cycles its way back around to in its fractured chronology. Prison is treated throughout Out of Sight as an entirely non-threatening limbo zone for the criminals Jack surrounds himself with, an inevitability that comes and goes in an almost arbitrary fashion. It's a trope that is in keeping with Soderbergh's forward-moving outlook on life, his propensity to underplay external circumstances in favor of internal stakes.

This is a tendency that speaks directly to Out of Sight. Soderbergh cares less about the physical markers of one's worldview than he does about how worldview shapes a way of personally relating to the world (at one point in Magic Mike, Channing Tatum dumbfoundedly blurts "I am not what I do," which is about as close to a direct summary of the director's outlook as he'll allow). A perfect example: Soderbergh stages Jack and Karen's first meeting in the claustrophobic trunk of a getaway car where Jack has temporarily kidnapped Karen after escaping from prison, about as enclosed and separated a space as possible from the outer world. In this tight, awkward physical scenario, Jack and Karen have only their words, their thoughts, and their body language to rely on – they can't even see each other's faces. Accordingly, there's a strange, hushed intimacy to the voices in this scene as the two drift from the obvious topic at hand to small-talk concerning movies and love stories. Even though Karen pulls a gun on Jack once the car has stopped and the trunk has opened (back in the outside world, social roles are reclaimed), it's obvious that there's romantic chemistry during this smooth ride of darkness, and after it the film becomes increasingly focused on their ill-fated attempts to revisit that indescribable feeling while upholding professional differences. 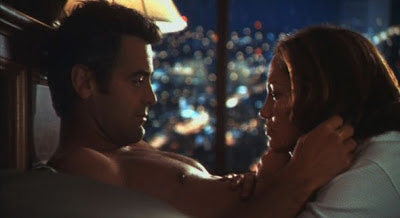 The truth is, however, that love can't realistically be acted upon for such diametrically opposed figures, so the few overt love scenes in Out of Sight feel like dreams more than concrete occurrences, making the final irresolvability of Jack and Karen's romance that much more tragic. The film is seductively old-fashioned in its approach to cinematic romance, presenting love as an ideal escape from the constricting boundaries of life. In a key sequence, one of Soderbergh's finest in two-and-a-half decades as a director, Jack visits Karen at a lounge and woos her with his soothing verbal play before the two retreat to a hotel room to make love. Shot in warm tones in front of snowy Detroit panoramas reduced to luscious blobs of blue and white, the entire scene is lovely, but it's elevated to something haunting and mysterious by the somnambulant rhythm of Soderbergh's cutting and the actors' movements. Here, Jack and Karen seem to move differently and speak differently than they do under the professional circumstances of the rest of the film, with flirtation bubbling out of every gesture. Soderbergh takes his time to show the two in any sort of contextualizing shot, instead remaining fixed on their faces and their bodies glowing against the moody nightscape. This lack of context – it is unclear both when and where exactly the scene takes place in the frame of the narrative – only bolsters the sense of love as an escape, something pure and possibly unreachable within the lives led by these characters.
Fortunately, the situations surrounding Jack and Karen's central romance are compelling in their own right, and provide an understanding of why the two leads are bound by their respective lifestyles. Subplots are sprinkled throughout Out of Sight – a mansion robbery aided by cohorts Maurice (Don Cheadle), Buddy (Ving Rhames), and Glenn (Steve Zahn), a snapshot of Karen's relationship with her father (Dennis Farina), compulsory flashbacks to various prison activities shot in harsh sunlight – but because of Soderbergh's light touch they never descend into heavy exposition, and the same stylishness brought to the love scenes is spread across the rest of the film. Nonetheless, this is still a film built confidently on the nuanced chemistry of its two would-be lovers. Clooney set a high standard of charm here that's arguably never been exceeded, and Lopez, who has has not been involved in such strong material since, has never been more naturally alluring. Their final scene together on either side of a cop car divide is a crystallization of the submerged infatuation simmering out of the rest of the film, a bittersweet, wordless goodbye that's tinged with all the unspoken longing of the preceding two hours.