(This is the fourth entry in the Favorite Directors Blogathon. Next month is Bela Tarr.) 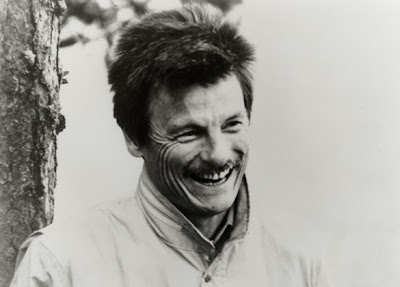 Unlike some of the other participants in this blogathon, I didn't put a terrible degree of thought into the scheduling of my posts in terms of what director might fit well with a given time of year. For instance, Kubrick probably would have made more sense for November in light of the tantalizing month-long tribute to the director that's just over the horizon at the Los Angeles County Museum of Art, and Bergman might have gelled nicely with the Christmas season, and maybe if I wanted to get creative Lynch would have been a clever pick for the Halloween month, but alas, none of this materialized. That said, I can say I've found a justification, however abstract, for picking Russian master Andrei Tarkovsky in the Thanksgiving month. On a certain general level, Tarkovsky's cinema is a great big thanks to the world and everything in it: his beloved family and homeland, the gift of memory and love, the ever-expanding collection of global artwork, the physical landscape, the natural elements, the feeling of the divine in the everyday, and much more.

Similar to some other reclusive filmmaking giants (Kubrick, Malick, etc.), Tarkovsky was never a prolific director, although it wasn't necessarily because he didn't want to be. Tarkovsky was subject throughout his career to stifling government censorship, culminating in a self-imposed 1982 exile from Russia that was essentially encouraged by the Russian government who denied he and his wife visas for re-entering the country. These political struggles speak to a fundamental core of melancholy in Tarkovsky's work, but his films are anything but bitter or depressive; rather, they are defined by their unceasing search for the sacredness in life that can be found against all odds. If you don't believe me, you haven't read "Sculpting in Time," Tarkovsky's lucid, thought-provoking summary of his thoughts on cinema and creative work in general, and one of my favorite books of all time. Or you haven't flipped through "Instant Light: Tarkovsky Polaroids," a book that gives intimate access to the filmmaker's personal polaroid collection, every shot of which seems to glow with unearthly light. Or you haven't really watched his films.

Tarkovsky's not a director I've written a great deal about, simply because I've always felt that transcoding his films into written language seems fundamentally inadequate and almost counterproductive. It's also because, as much as I'm emotionally and spiritually connected to Tarkovsky's work, I often find myself intellectually out of step with them, since they appeal to the sensual self as much as they engage critically and comprehensively with philosophical and political concepts that sometimes feel out of my reach. But maybe if I can get over this hump, it will be easier in the future to translate what I find so consistently inspiring and moving about his work.

(Note: Regretfully, I have been unable to get my hands on a DVD of Nostalghia, Tarkovsky's second-to-last film, so it is left out of this list for now.) 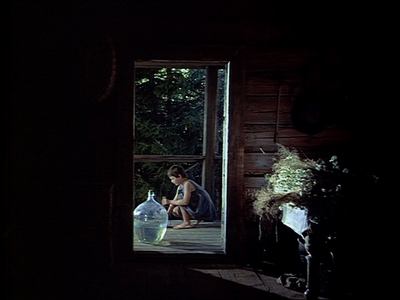 1. The Mirror (1975): Since seeing The Mirror for the first time some three or four years ago, I've yet to unlock the greatest mysteries of why it works so remarkably on my soul: the questions of how it moves the way it moves, what makes certain images and cuts so unbearably poetic, and how it manages to tie together its disparate threads so elegantly, remain the kind of unanswered and potentially unanswerable questions we expect of great art. It's Tarkovsky's most bluntly personal work, covering anywhere from his childhood to his father's war experience to his mother's domestic experience to the history of Russia, yet it's also the one that can, for the likeminded and motivated, cut deeper than any straightforward narrative could. During The Mirror, I find myself tearing up, contemplating, becoming riveted, angry, and filled with joy. I'm even bored on occasion. The film is the ideal platform for meditation, for putting one's life into the proper perspective. 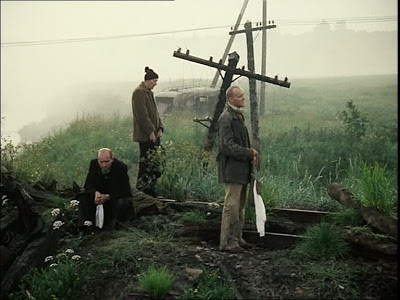 2. Stalker (1979): The mysteries and complexities of Stalker are so robust that the film has inspired its own body of scholarship: Geoff Dyer's "Zona: A Book About a Film About a Journey to a Room" was released earlier in the year to ecstatic reviews, but it still only scratches the surface of Tarkovsky's dreamlike odyssey. Truth is, there is no definitive truth about Stalker. It's as much of a tantalizing litmus test as anything else, but it also doesn't drown in noodling self-absorption. Instead, with its adventure narrative (I know that sounds like Indiana Jones or something, but on a basic level Stalker conforms to the genre) that moves deeper and deeper into the unknown, it's designed in such a way to provoke escalating curiosity in the viewer. Along the way, Tarkovsky provides some of the most shimmering images in his oeuvre: a long traveling shot that takes the three central characters into the Zone, a slow dolly forward through a decrepit tunnel, a glimpse of a stray dog in the middle of a misty stream, a shot moving backwards that settles on a painterly panorama of the three figures resting beneath a light rain, and a final image of a young girl telepathically willing a glass of milk to shake off a wooden table. Stalker is nothing less than majestic. 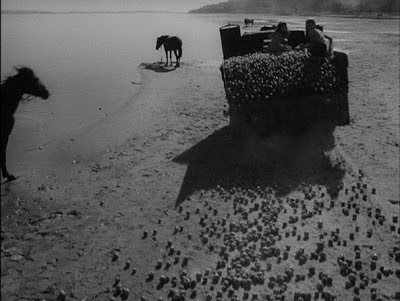 3. Ivan's Childhood (1962): I can't think of a filmmaker living or dead who has better conveyed the sense of childhood innocence fading abruptly and sometimes violently from life than Tarkovsky, and this idea was present even in his feature debut, the swampy and dirt-caked anti-war film Ivan's Childhood. In it, one can already glimpse Tarkovsky's distinctive focus on dream sequences at the expense of narrative momentum, his ability to build zones of seemingly aimless reverie that float in and out of the story with ease. The film morphs to the obstructed consciousness of young Ivan (Nikolay Burlyaev), a 12-year-old boy who has been thrust into a dispassionate lifestyle as a Russian spy on the Eastern Front in World War II, working as a gofer for the gruff soldiers who represent his only tentative family unit. Moody, extraordinarily photographed military scenes are juxtaposed with ecstatic mental wanderings evoking peace and simplicity and carried to sublime heights by Vyacheslav Ovchinnikov's spare score. This was my entry point into Tarkovsky's body of work, and it remains a perfect and surprisingly developed encapsulation of his signature themes and atmosphere.

4. Andrei Rublev (1966): Epic, episodic, and hugely ambitious, Tarkovsky's fiercely unconventional biopic of 15th century icon painter Andrei Rublev was exactly the kind of film he needed to make early in his career to cement his position as an elite European director and propel his career into its next stages of artistic development, even as Soviet authorities did their best to ban the film for as long as possible. For more than three hours Tarkovsky cycles through turbulent moments in Russian history – the Tartar invasion of an innocent village, shot with punishing verisimilitude, is a remarkably complex set piece – while maintaining a compassionate engagement with Rublev's struggles for artistic expression in a brutal, faithless world. It's fitting that the titular figure shares Tarkovsky's name: both artists fought through intense career-long government censorship and a lack of public response to their work. But the film is much more than just a monolithic act of solipsism – it's a plea to all creators working under oppressive circumstances to continue creating at all costs under the knowledge that it will, if not instantly then at least one day, be someone's inspiration to keep living. 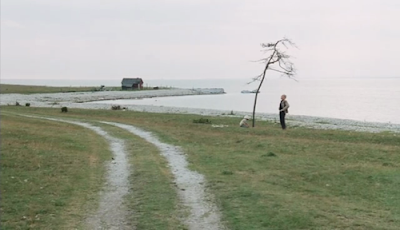 5. The Sacrifice (1986): When Tarkovsky began working in exile, his films gained a particularly potent sense of existential doom and shifted away from the explicit reveries of love and warmth in films like Mirror and Ivan's Childhood. As Tarkovsky's final goodbye to filmmaking, The Sacrifice is the pinnacle of this tendency. Post-production on the film occurred in step with the director's slow death from cancer, and as a result an atmosphere of apprehension hangs over it, with Tarkovsky's characteristic spiritual questioning acquiring an additional charge of directness. As Alexander, Erland Josephson hurls his profound confusion at the sky in the midst of a possible incoming natural disaster, and the markers of stability that define his life (his family, his sanity, his faith) start to disintegrate. Meanwhile, the landscape around him remains, a soggy island resting on the precipice of nowhere. The Sacrifice is about the impossibility of reconciling a relentless search for something higher and the stubborn physicality of the Earth, a difficult-to-represent concept that has never been better represented than in the film's famous climax, a 10-minute single-take sequence of Alexander burning his house down and running mad in the fields.

6. Solaris (1972): I'm in dire need of a theatrical screening of Solaris, because it's the kind of film that I suspect would be significantly enhanced by a large-scale presentation in the presence of an attentive audience. As it stands, it's my least favorite of the Tarkovsky films I've seen, though that's not to imply that it's anything less than a typically epic, thoughtful piece of filmmaking. Its long-winded conversational intimacy, which is couched inside the grandiose design of a psychologist visiting a space station to investigate a curious phenomenon only to be barraged by the memory of his dead wife, may not translate to the small screen as adequately as other Tarkovsky films, but the central fixations are all there in full swing: the divide between the body and soul (materialized as the space between Earth and the cosmos), the troubling elusiveness of the past, and the inherent melancholy of an earthbound existence. I find myself admiring the hypnotizing setup (including a ghostly walk among misty landscapes and a sci-fi vision of Tokyo freeways) in favor of the amorphous body that comprises the latter two thirds of the film, but this is still essential viewing.

Other November/Halloween entries in the Favorite Directors Blogathon:

I'm rather ashamed to say I've only seen one Tarkovsky film (Ivan's Childhood), and your commentary about his searching for the sacred in places least expected inspires me to watch more.

A lot of people go into this raging/never-ending debate as to whether Solaris scores over 2001-A Space Odyssey. However what I feel is that two films are radically different in their approach. Tarkovsky delved within whereas Kubrick explored the distant horizon-the periphery of human achievement. A suspended apotheosis.

A single view of Solaris is enough to realize that Tarkovsky wasn't intending to make a science fiction classic. For him, it was more or less like a metaphysical facade; a tool using which he could create unearthly situations and deal with ways in which humans would react to it. It is certainly not his best, but it is a cinematic achievement nevertheless.

I agree. They're very clearly two different films with different aims entirely, so the comparison has always irked me.

You should check out Nostalghia, it's wonderful. My favorite is Andrei Rublev, but all of his films are brilliant (I have yet to see The Sacrifice). The Mirror is also unbelievable and very unique.