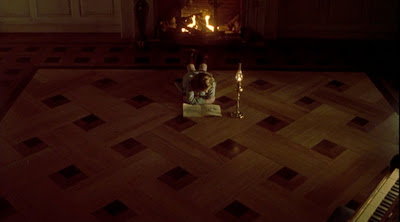 The Others (2001): Spiritually and structurally, Alejandro Amenábar takes pains to emulate The Shining (the displaced mansion, the final act involving kids taking the initiative to climb out the window, the unsettling shock cuts, the fixation on circles and patterns), but more often than not it's so transparent that it comes off as little more than genre pastiche. It would all be rather irritating if The Shining wasn't already such a masterful benchmark in macabre cinema, and if I wasn't perfectly fine with revisiting anything that shares with it artistic similarities. Aside from that, it's interesting how it continues modern Hollywood's fetishistic desire to dissect the very private star persona of Nicole Kidman, the way it aggressively dislodges her from her comfort zone in a sneaky attack on over-anxious and oppressive parenting.

Wallace and Gromit: A Close Shave (1995): I've always been fond of Nick Park's particular animation style, whose slippery homemade textures possess an inherent playfulness. Much of the charm I respond to in these episodic short films is quite directly in how things look, how the surfaces are clearly so labored over. But it's also about how detailed Park is in his direction. His emphasis on all the tiny behaviors (albeit of narrative motivation rather than atmospheric) makes him a unique descendant of Jan Svankmajer.

Arrested Development (Season 1, Episodes 1-9, 2003): A show I've been harassed to watch for quite a while, and also one I semi-consciously avoided in light of the few episodes I did see. Recently I started up on it formally, and I remain bugged (or perhaps that's too harsh a word) by the same qualities that casually directed me away from it: its nearly oppressive level of design and self-referentiality, its offhand insensitivity, its "wink-wink-ness", and the forcefulness with which it intends for you to laugh. My own taste for comedy lies more in improvisational directness than it does in the domain of clever intellectual montage and the omniscient guiding narration of Ron Howard (hence why I prefer romps like Always Sunny in Philadelphia or Curb Your Enthusiasm in their nearly abstract vaudevillian qualities), which is why I think the best parts of this show rest on the shoulders of David Cross and Will Arnett, who have classically showboating characters with real room for natural absurdity.

The Conversation (1974): A film of sound first and visuals second, which fails to acknowledge that Coppola is really at his best in both departments. There's not a huge amount of complexity at work here in the story, ensuring it fits within the bulk of 70's paranoid thrillers, but Coppola's presentation of that story, and the emotional predicaments that come with it, is immensely rich and nuanced. It's a tantalizing slow burn of a film, a fever dream that accumulates layers upon layers of menace and uncertainty with such ease.

Minority Report (2002): Very glad I got around to revisiting this one, which is easily one of Spielberg's most fluid and assured entertainments of the past decade. It doesn't have the same levels of termitic ideas as A.I., but it telegraphs its own lines of inquiry - the future of national security, the scary issues of corporate consumerism, the struggle against personal and political fate, the injustices that fall through the cracks in a system of absolutes - with greater slickness and visual acuity. All of this, I think, without jeopardizing the pure mass appeal, as Spielberg's fluctuation between dark sight gags and dead seriousness is well-tempered. Backlash against the film's twisty ending abounds, but I took it as not only loaded with thrilling scriptwriting maneuvers but also thematically and emotionally in line with the rest of the film. More on this one to come.
Posted by Carson Lund at 3:19 PM