The Conversation (1974) A Film by Francis Ford Coppola 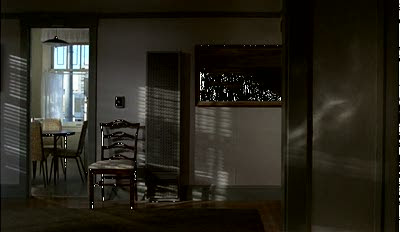 For a medium that is so universally hailed as a “visual art”, the resource of sound that is employed in cinema can be routinely neglected. With a film like Francis Ford Coppola’s The Conversation, the coin has been flipped, and cinema is almost anything but a primarily visual art. It’s not that Coppola’s compositional instincts are not intact (they are), or that his visuals do not effectively communicate the emotions of the story (they do), or that his nearly abstracted aerial zoom of Union Square to open the film is not a dynamite teaser (it is); it’s just that in a film like The Conversation, hinged on the notions of surveillance and wiretapping, sound becomes the most powerful tool in broadcasting the complicated psychology of the central character, Harry Caul (Gene Hackman). Caul (the pun relating to telephones here is delicious, yet curiously never called out in reviews) is a strictly secretive professional, a man whose life, as one character puts it in Taxi Driver, "has become his job." He's hired by top-shelf employers to listen in on others' conversations, extracting important private information that he relays to them.

Thus the film itself becomes akin to an extended audio tape, a dense and often times sonically harsh private recording. Harry's investigation involves a complex system of wires, mics, and recording tape, and his subjects - a young, upscale couple, Mark and Ann (Frederic Forrest and Cindy Williams), from a nearby business aware of their being watched - have deliberately chosen to have their conversation while strolling in the middle of a crowded Union Square in hopes of not being easily heard. Throughout the film Coppola returns to Harry in his intense scrutiny of the recording, laboring over specific bits by slowing it down, speeding it up, rewinding, and changing frequencies. The detritus of all this calculated dissection is bizarre processed noises that sound like something from Star Wars (must be the influence of Harrison Ford as the stern businessman watching Caul's every move), which at first act as a logical result of Harry's work before entering into the soundtrack as a seemingly non-diegetic, unmotivated force to torment him in his private life (though sometimes it's hard to tell given the amount of sound bridging the film engages with).

Representing Harry's psychological state is something the soundtrack does more and more as the film progresses and more information is accumulated about the titular conversation. In the ensemble scenes when Harry is among his colleagues at a dingy late-night office party, the soundtrack plays like a lo-fi remote recording, with the various voices fading in and out of comprehension. Little attempt is made on Coppola's part to make the dialogue that occurs have any satisfying coherence or completeness, mirroring Harry distanced, dispassionate experience of the scene, the way he's always wandering away from the central action, thinking to himself in brooding silence. As he lies in bed later with the lovely femme fatale Amy (Teri Garr), his mind is anywhere but on the present moment, as snatches of the conversation come back to him in fully memorized form, leading fluidly to an ominous dream sequence where Harry - in a clever bit of staging - shouts his uncertainties to an obscured Ann at the top of a hill. Harry's suspicions regarding the potential violence surrounding the conversation are unclear (evidenced by the thick fog) and his attempts to attain freedom and clarity in the face of this predicament are ill-advised, for he is too withdrawn and self-absorbed to feasibly find an answer. The ourobouric loop suggested by this self-defeating psychology is mimicked by the melancholy jazz piano that is a constant motif throughout, a piece of music whose constantly ascending and descending melody implies a never-ending aversion to climax or catharsis. 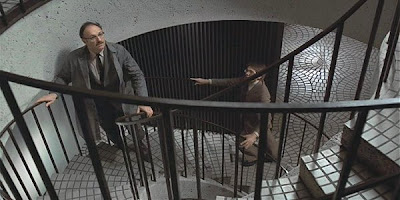 Coppola's just as deft at visually communicating his character's surfacing feelings of guilt and the idea that the strictly professional can't help but invade the decidedly personal. Quite organically, he and DP Bill Butler find geometrical elements in the architecture of a scene that effectively heighten the escalating tension in the story, like the onslaught of diagonal lines that appear in the background of many shots, most memorably in one that gradually dollies into a payphone, proportionally catching more and more harsh reflections on the glass as Harry grows increasingly impatient with his call. In a separate and equally natural compositional method, Harry is frequently positioned behind gates, window panes, and other patterned frames, making sure to announce his entrapment from his job, his social life, and himself. At one point the subject of this technique is a priest on the opposite side of confession booth, and here it works to show how ill-suited the priest is to simplistically intervene in Harry's life, thus dismissing the possibility of any quick and easy religious solution.

In a collection of inferences and telling snippets, the film slowly and expertly reveals itself to be about the elusiveness of truth, the way that such detailed examination of physical evidence can still lead one down a false path. In this way, it's not unlike Antonioni's exquisite Blow-Up, a film which similarly fetishizes a technical process in order to immerse the viewer in the main character's misguided subjectivity. Most of the superb tension present in The Conversation's final act derives from the ambiguity in whether or not the actions onscreen are Harry's visions or if they're hard facts. A toilet overflows with blood, a women is thrust into a glass wall viciously (her tortured scream quickly becoming a shrill, synthesized pulsation in the musical drone of the scene), a frenetic burst of violence ensues. If The Conversation is a film invested in the idea of being in several different places at once through surveillance - sonic and physical, private and professional - then the ending proves that this discontinuity has become not only spatial but also cerebral. Harry believes he has cracked the mystery of the conversation, but the physical evidence tells otherwise, or is it his fractured mind telling him otherwise? Coppola's dense, multi-faceted collage of a film has a way of bringing about the same profound disorientation in its viewer as it does in its protagonist.
Posted by Carson Lund at 7:21 PM

Great piece, Carson. The soundtrack is the star of this film, no doubt about it, I love the way Coppola focuses on the process of unearthing meaning in sound, fast-forwarding and rewinding, filtering out some sounds to emphasize others. I love any movie that patiently examines a mechanical process in this way, and The Conversation is one of the best.

There's also the very interesting moral inquiry at the heart of this story: the questionable morality of Harry's job as a voyeur. The film makes us question the idea of skill and talent: Harry's the best at what he does, but all his technical brilliance, his ability to analyze and reconstruct sound, means nothing if he uses his talents for evil purposes. He's haunted by the memory of a case when his technical ability led to murder, and he becomes obsessed with "fixing" that failure by applying his ability, he thinks, in a more positive way. Is it a metaphor for the film artist's responsibility to use the tools of sound and images to tell worthy stories and express worthy ideas? I like to think so.

That's definitely a tantalizing way to read it, Ed, especially since Coppola gives Hackman so many prolonged close-ups while he's working intensively. His exacting technicality brings to mind mechanical editing on Steenbecks, something editor Walter Murch was still using at this time. Funnily enough, I'm currently reading Murch's book In the Blink of an Eye, in which he raises a lot of these filmmaker/subject parallels.