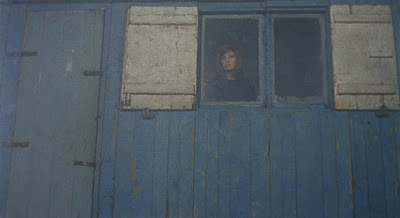 When Monica Vitti first appears in frame in Michelangelo Antonioni's Red Desert, her figure looks surreal against the pale, corroded industrial landscape she traverses. She's beautiful, as usual, with a green wool coat and voluminous red locks of hair. On the same waterside dock as her is a mass of striking workers in homogeneous gray and brown uniforms, their appropriately herd-like behavior set against Vitti's cautious mother figure, navigating the acres of factories and steamships with her little boy to meet up with her husband Udo (Carlo Chionetti), the manager of this misty compound in Ravenna, Italy. It's a world of vapid technological progress, of muscle and science, and Vitti's elegant, delicate Guiliana instantly feels out of place. For all of the surface similarities between Red Desert and Antonioni's previous three films (his "alienation trilogy" made up of L'Avventura, La Notte, and L'Eclisse), the outsider quality of Vitti's main character, her casual exoticism in her own habitat, vastly separates Antonioni's project. We now have a woman who is not isolated from her familiar, though somewhat evolving bourgeois dwellings, but rather a bourgeois woman permanently housed within an alien environment, the pressure point of modern materialism. The film is the slow-burning dramatization of her misplacement.

Guiliana's problem goes deeper than a simple case of being in the wrong place at the wrong time however. The industrial habitat is a nucleus, a predictor of how the outside world will evolve, and not just a rare exception. It is clear that the unpredictable, enigmatic neurosis that Antonioni superbly conveys in Guiliana cannot be cured in any systematic manner. Instead, it is the result of a woman being out of step with the movement of society around her, unprepared to adapt psychologically and physiologically to her surroundings. Udo stubbornly attributes her emotional turmoil to a vaguely defined "accident" some half a year before that put her in a hospital for months, but from the first time Antonioni reveals one of her chilling midnight haunts, the implication is that something far more all-encompassing, more undefinable, is at the root of her world-weary exhaustion. She twitches, forgets things, caresses her body in a panic fit as if to make sure it's still there, and shies away from all physical contact. Yet when she's not having such convulsions, she's acting comparatively normal, maintaining an air of adult complacence and even engaging in a bit of horseplay in the film's drawn-out centerpiece, an impromptu gathering between a group of industrialists and their wives at an abandoned fishing hut. This sequence, a languid choreography of laughing and sometimes writhing adults chatting circuitously about aphrodisiacs and other insignificant topics, illuminates the seeming calmness and comfort level of the majority of the group, and cements Guiliana's status as a fundamental outcast, prone to certain behavioral changes that come across as hasty and unmotivated.

Only a mild and arbitrary interjection of the external world - say, the presence of a color (intentionally calculated by Antonioni) or a particular spoken word that doesn't sit right - can disturb Guiliana back to her angst. In the case of this particular sequence, a quarantine flag raised by a neighboring ship sends her into a panic. This occurs after an aphrodisiac compels her to make an offhand, celebratory comment about her desire to make love. She then reiterates privately to her husband, "I meant it, I do want to make love." His response is at once practical and backhanded: "How can we?" Though he's referring to the social incorrectness of indulging in desire before the group of people around the two of them, he might as well be speaking broadly. How are two people to make love in Antonioni's grim world, a place where "it's never still", as Vitti pronounces, where thick fog and industrial horns perpetually interrupt the stasis. A sensual pleasure such as that which Guiliana requests, which is potentially enough to remind her of a reason to live, seems impossible and unthinkable. As with many of Antonioni's films, Red Desert's general narrative action can be brusquely reduced to "people talk and talk and never quite connect", and one gets the sense that it's a fatal misfortune, that the searing emotional divide between people is partly what's preventing Guiliana from properly engaging with the world. 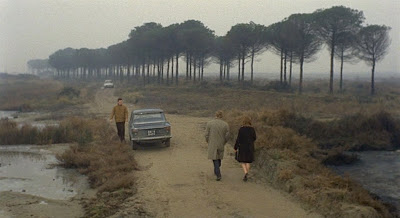 One character, Richard Harris' Corrado Zeller, a friend and coworker of Udo, gestures towards personal, enlightening connection with Guilana. He arrives with both a calculated sense of lust towards her and his own particular breed of sorrow. Listening and ogling more than he does engage in conversation, he nonetheless represents a somewhat continuous source of support and empathy for Guiliana, who reveals to him a story of her past suicide attempt. But when he proves to be equally out of sync with the world, affirmed by his eventual taking advantage of Guiliana in her climactic moment of distress, Antonioni's point becomes clear as ever: that there's no easy escape, no shoulder to cry on in regards to this kind of moral discomfort, that only approximate adaptions made over time can approach anything near alleviation. This is the undertow of the quiet, poetic final scene, in which Guiliana once again walks through the industrial maze, answering an innocent question from her son about a bird's ability to evolve in such a way that it knows to avoid the gushing poisonous smog from the silos. Guiliana's small feat of acknowledging this instinctual maturation, of becoming the authority on it, implies that she is prepared to at least tolerate the world, if not cope with it.

All of this is, for the most part, more alienation from Antonioni, a thematic concern that was in danger of becoming simplistic shtick at this point in his career. But too much of Red Desert hints towards newer ideas and points towards the refreshing experiments of Blow-Up and Zabriskie Point. One sequence in particular stands out, and it comes at roughly the beginning of the final act. Guiliana is comforting her son with a story, but at his request it's not a preexisting story, something pre-fabricated to elicit a streamlined response. Therefore, she is forced to pull from within, from her ideals, experiences, and memories. As she narrates an iconic tale of a curious little girl and her secret private beach, Antonioni provides luminous, nostalgic images that feel like estimations of Guiliana's own thought process. The girl is confronted three times with unsettling mysteries - a floating empty boat, an unidentified operatic voice, the startlingly human-like rock formations - and is forced to overcome them with both excitement and fear. It's touching that Antonioni engages with and allows for this kind of emotional crutch, the ability to conjure up the past in an attempt to understand the present. Rather than being stranded totally in her confusion, there is this sudden moment of catharsis that is uplifting and transfixing.

Antonioni's typically impeccable mise-en-scene stretches here to a new degree of artistry. Interestingly, shots of the back of Vitti's head, with her vantage point out of focus, the kind of images that might be brief insert shots in another film, become the punctuation points to focus on here. They communicate a murkiness and unfamiliarity of vision that Lucrecia Martel certainly must have lifted as inspiration for her film The Headless Woman. His decision to convert to color was the boldest and most advantageous choice of his career, and Red Desert, his inaugural experiment with it, renders one astounding image after another. It's been argued that his integration of specific primary colors warrants a scene-to-scene symbolic or psychological value, but I take them as being an incessantly oppressive and taunting force, a reminder of the colorful allure of Guiliana's wardrobe, and hence her preferred mode of living. They seem like the last potent indicators of life and creativity in a milieu mostly dominated by unflattering grays and browns and exacting progress. It's a beautiful plea indeed, the kind of thing that conveys an even greater pain and isolation than almost anything Antonioni had done prior.
Posted by Carson Lund at 8:32 PM

I rented this film when I was staying in Liverpool alone during a very lonely, isolated period, I found it in a local library in Southport. It was perfect. It blew me away...