The Vanishing (Spoorloos) A Film by George Sluizer (1988) 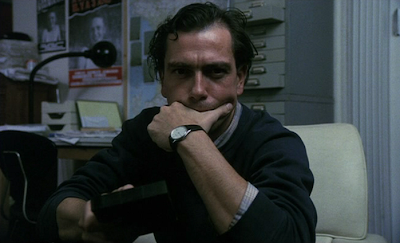 At the center of George Sluizer's original 1988 version of The Vanishing (that is, before he made the inconceivable move to recreate it in Hollywood) lies a brutally existential question: is it better to live a life with a perpetual uncertainty or to die having finally understood? It's the stuff of hard, speculative fiction, the kind that challenges presuppositions about life and death and isn't afraid to reveal abysmal ambiguities. The conflict is posed to the film's main character, Rex Hofman (Gene Bervoets), a young Dutch man whose girlfriend Saskia (Johanna ter Steege) inexplicably disappears at a highway rest stop in the first twenty minutes, and one could say the capricious viewer as well, who is constantly deciding whether to keep watching this creepy, insistent work or turn it off prematurely and never know the answer to its rigorously sustained mystery. But Sluizer avoids some standard whodunit. In fact, very early on The Vanishing signals the kidnapper, and goes so far as to intimately observe his life. Yet the film maintains a taut air of anxiety. There are tougher, more slippery eggs to crack here, and quite literally so (Saskia has a nightmare that she and Rex meet as a pair of golden eggs in space, which is later refrained by Rex in his climactic terror).

Ironically, the film's tag of "psychological thriller" is disingenuous and ultimately false; this is a film whose fundamental mysteries would be made foolish in the face of reductive psychological readings. Attribute this largely to the villainous concoction at the crux of the story, Raymond Lemorne (Bernard-Pierre Donnadieu), as genuinely unnerving a monster as any, and one of the finest screen enigmas to emerge from the 1980's (who strikes again once again, laughably, as a suave, unthreatening Jeff Bridges in the later version). What makes Lemorne such a chilling criminal is his utter banality, the precarious sense that he just might not be so much of a criminal. Throughout the film, Sluizer emphasizes the more respectable aspects of this man's domestic life; working as a chemistry professor, he has constructed a tame lifestyle for himself with an agreeable, though seemingly emotionally comatose wife and two daughters (surely, two of the most oddly, suspiciously forward daughters to hit my television screen in a long time), and he has recently acquired a peaceful country home. When the film shifts gears early on to focus unremittingly on him, it even seems to lighten its mood, if such a notion could be possible when portraying a subliminally quack abductor. Cheesy 80's music, whose tempo and tone are often times reminiscent of the kind of music that would accompany slapstick comedy, collides with the footage of Raymond rehearsing his kidnappings and subsequently checking his blood pressure, making tonally ambiguous what should be eerie and disturbing.

It's funny then how it is precisely this ironic detachment that makes the scenes so eerie and disturbing. It also speaks to the tactic which makes The Vanishing so effective as a thriller. Not that it is loaded with dialectics like these, but that it is so routinely apathetic towards its potentially lurid, B-movie subject matter. Everything about the film exudes commonplace: Raymond's calm, invisible demeanor, Rex's slow, lukewarm pursuit of his girlfriend's abductor, the cosmopolitan scene of the initial crime, and most of all Sluizer's cool, reserved direction, witnessed in the way he drops the expected narrative trajectory after the linear first act. Nothing stands out as an attempt to manipulatively raise the stakes. The ingredients kept secret in most thrillers of this order - the mysterious antagonist, his personal life, the amount of time passed since the crime in question - are front and center in The Vanishing, on display for intense scrutiny, and yet the suspense does not shrivel as a result. Sluizer punctuates the film with ominous synthesizer moans and arpeggios created by composer Henny Vrienten but rarely follows up on what they suggest dramatically, instead leaving them dangling in thin air. The result of all these accumulated sonic red herrings is a general sense of discomfort and dread, the idea of the payoff being suspended indefinitely, poised to release once it has reached the pinnacle of its momentum. 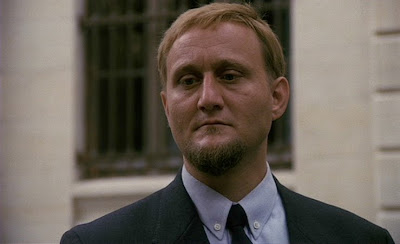 And perhaps inevitably, it all pays off in a sublimely shocking manner. Because of the way Sluizer crafts the whole film like patchwork around the clincher moment, its success or failure lies totally and massively in the hands of a strong dramatic epiphany. What does finalize The Vanishing is as savagely beautiful as it is unsettlingly indefinite, one of those earth-shattering climaxes that has the kind of ineffable impact it does for a distinct reason, in this case the complete and utter lack of rationality. Years after Saskia's disappearance, Rex is still, to the dismay of his current girlfriend Lieneke (Gwen Eckhaus), cultivating a search campaign, and yet his most likely solution is knocking at his door. He is receiving mail from Raymond offering a meeting between the two in which all of the answers will be revealed (if Saskia is alive, where she is, and what happened to her on that day at the rest stop). Finally, Raymond tracks Rex down himself. He takes him in his car across the French border, dishing out enigmatic philosophical platitudes on the way. If the setup of the film sometimes wavers clumsily in tone and conviction, these final twenty minutes are tense, haunting, first-rate filmmaking. Raymond is supposedly sympathetic towards Rex's irritation, and he wants to save him from "eternal uncertainty", which to him is worse than death. But he's also revealed as a sociopath, a man whose motivations exist on an imperceptible plane. All this multifaceted moral ambiguity is handled expertly by Sluizer, culminating in a blurry close-up of Raymond shot through the rainy windshield of his car right before the momentous revelation, suggesting an inability to grasp the full truth, to really understand him.

This is a deeply pessimistic but ultimately cautionary worldview that Sluizer endorses, the idea that the most savage of evil, as irrational as nature itself, can exist behind the most comfortable surfaces and go entirely unnoticed. The number of times Sluizer frames Raymond and his family in tight, affectionate medium shots is enough to imply that nothing is what it seems, that the ideals of family and love that we create are not without their blemishes. Similarly, the otherwise harmonious relationship of Rex and Saskia harbors its own shade of grimness when Rex abandons her in their broken down car in the dark of a road tunnel during the opening scenes to angrily fetch gasoline. Such subtle observations are what lend a deep, lasting power to The Vanishing, a film that grows more frightening and confusing the more you think about it. It's no ordinary family, it's no ordinary relationship, and it's no ordinary thriller. As always, there are tougher, more slippery eggs to crack here.
Posted by Carson Lund at 9:58 PM

Of all the flawless films whose remakes are criminal, this one tops my list. Unfortunately I think we might get a repeat of this business with Let Me In (remake of Let the Right One In), which of course I'll have to see just to enjoy being exasperated.

Oh yeah, definitely. From the trailers, Let Me In certainly looks to be a somber rehash.

I saw "The Vanishing" three or four times, during several years, and it is a perfect film. You can't quit the vision up to the end.
I saw the remake, with Jeff Bridges, it is a poor film, after watching the original.

PS. I like your blog very much
(mine is: http://markx.splinder.com)

Yes, The Vanishing is pretty great. Thanks for commenting!