The Seventh Seal (1957) A Film by Ingmar Bergman 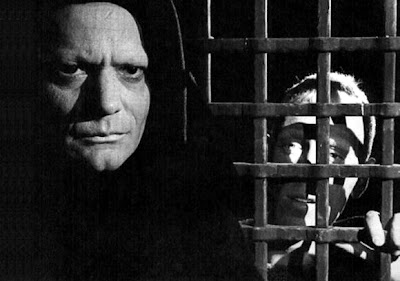 The Seventh Seal is an unusual film in Ingmar Bergman's oeuvre; baroque, emphatic, and devilishly witty, it's everything his work strayed from as he veered progressively into what many would call more "mature" territory. It's intoxicated with a kind of grandiose, almost Shakespearean dramatism that is often associated with a particular breed of Bergman, evidenced mainly in films like Smiles of a Summer Night, The Virgin Spring, or The Magic Flute. Yet it also possesses a relentless experimentation, an idiosyncratic sense of artistic soul-searching that sets it apart from simply being a solid piece of drama. Taking death as his subject with alarming frankness, Bergman crafted a cleverly interweaving narrative that was both a means through which to grapple with his own immense fear of death and an attempt to discover the fruits of life that could put a damper on such anxiety. Evidence of Bergman's forthrightness comes early and often, initiated only five minutes into the film when after a boisterous shot of waves crashing against the shore under a setting sun, a tall cloaked figure appears on a silent beach. "I am Death," he says in an uninflected tone to a Knight who is taking a momentary rest on the shore.

This eerily straightforward reveal was instantly radical at the time, for no other quasi-mainstream picture, regardless of cultural background, had made such a direct stab at personifying man's mortality. Bergman presents Death (Bengt Ekerot, whose naturally morbid appearance perfectly fits the part) as an amorphous black frame with a white face nestled inside, part clown, part skull, who speaks plainly and has no answers to the lofty inquisitions fired at him occasionally by Max Von Sydow's weathered, penetrating knight Antonius Block. Instead, he confronts him and tells him his time is up, to which Antonius impulsively offer s up a game of chess that acts as the metaphorical platform for the rest of the film as he and his squire Jöns (Gunnar Björnstrand) - and soon a hodgepodge of theater performers they collect along the way - traverse through a hysterical, plague-ridden Swedish countryside. Aided by Death's unpredictable appearances, Bergman injects the proceedings with a sustained atmosphere of anxiety, which gives way to a variety of responses in the Swedish populous from distrust and paranoia to mania and anarchy. One of the most memorable scenes in the film involves a parade of flagellants - presumably once believers who have since cast their hopefulness aside in the face of the widespread plague, preferring to believe God a malicious, traitorous omnipresence - interrupting a traveling theater performance in a small village. The deathly shrill of lashes, chants, and, in one instance, the screech of an apocalyptic preacher drowns out the playful entertainment nearby.

But The Seventh Seal is far from being a relentless exercise in doom and gloom. Though it is largely what the film's lasting reputation has rested on, it's also perhaps Bergman's most darkly funny work, rich with a philosophical sarcasm that cuts from Jöns' plentiful one-liners right through to Bergman's presentation of some of the more fearful characters, who come across as half-witted, rabid, and physically awkward, the proverbial village idiots. One such character, an oafish actor messing around with the wife of the corpulent blacksmith Plog (Åke Fridell), reaches his end when Death cuts down the tree he's sitting in promptly after he gets in a silly argument with Plog. After the tree falls, a squirrel steps up to the remaining stump. The suggestion is, perhaps, that the brash and unwieldy actor was reincarnated as a lesser, more simplistic life-form, one immune to the insanity caused by the plague. These figures are also incessantly mocked by the sly, quick-witted Jöns, a man who possesses a hopelessly earthbound worldview partly in common with what Bergman himself would come to sympathize with as his life went on, and antithetical to Antonius' restlessly searching spirit, trying as it is to find any potential indicator of God's existence. One can sense Bergman slowly approaching the skepticism of Jöns, especially when he courageously takes such lengths to make impish and foolish those who allow death to become such an all-encompassing fear, a veiled crack at alleviating his own condition. 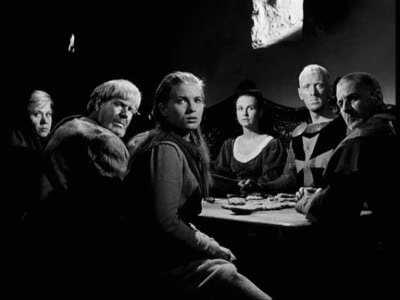 If these elements gain their subtle richness from a preliminary understanding of Bergman as an artist and an individual, much of The Seventh Seal pulls heartily from elsewhere. Amazingly, nearly every image in the film contains some degree of symbolic resonance, a poetic mining of the collective unconscious triggered from centuries of religious artwork. Consider the fact that three of the film's major scenes - the chess match between Death and the Knight, the death of Plog, and the culminating "Dance of Death" - are pulled directly from a majestic fresco painting in the church of Bergman's youth. Also, a very early scene that introduces the saintly traveling theater family - comprised of Jof (Nils Poppe), his wife Mia (an extraordinarily beautiful Bibi Andersson), and their little son - involves Jof receiving a pastoral vision of the Virgin Mary in the field next to him (the second instance of the film directly materializing an iconic religious figure), which portends his later ability to be the only other character in the film to see the form of Death without dying subsequently. But the majority of the film's references are trickier, more subliminal: the strawberries and milk served to the Knights by Jof and Mia as symbols of nourishment and rejuvenation, the self-referential nod to the painter that paints life as he sees it and thus stands as a surrogate to Bergman, who claimed to try to make The Seventh Seal like a church painter might make one of his frescos, and the quintessential Bergman scene of humiliation in the tavern when Jof is made to act as a bear to the perverse joy of a horde of miserly, faithless drunks, which feels uncannily like a reprise of some Biblical scene that nevertheless escapes me. The film's dense iconography has an elemental purity to it that might go unnoticed on a cursory viewing.

Contrary to the film's grim, self-serious reputation, The Seventh Seal is actually one of Bergman's most tightly plotted works, which runs counter to the idea of the director being at his dreariest when he's at his most meandering. The film propels forward with headlong determination, while Bergman's own piercing curiosities about the elusive nature of God, faith, death, and human connection constantly refract in various shapes and sizes through the terrific ensemble cast, each character a shard of their maker's persona. Antonius the probing believer, Jöns the skeptic, Jof the naive visionary, Mia the endless purveyor of love, and the mysterious silent woman who Jöns saves from danger earlier in the film the desperate, introspective enigma. When these figures finally spare a moment free from the morbid clamor pervading their native land in a quiet, sublime scene of mealtime at dusk, it amounts to a vital dismissal of death, an affirmation of the importance of human ties, and a unity of Bergman's doubt, fear, and unexpected optimism.
Posted by Carson Lund at 1:21 PM