WR: Mysteries of the Organism (1971) A Film by Dusan Makavejev

The ideas proposed by psychologist/philosopher William Reich were immensely radical in his time (1930's to 1950's), and perhaps still are today, despite the seeming applicability of them: sexual liberation is the key to peace and happiness, the destroyer of repressive ideologies such as Communism, and that this very lust for love is embodied explicitly in such ways of government, positing the Nazi swastika as a veiled image of entangled bodies. He also created the theory of "orgone energy", which basically states that the libido is a mechanism heavily monitored by the orgasm, and that beneath every orgasm lies a level of primal aggression. These baffling but undoubtedly thought-provoking concepts are all given ample exploration in Dusan Makavajev's Slavic essay film, WR: Mysteries of the Organism, the "WR" indeed standing in for William Reich. In some ways, the Western world has adopted, albeit obtusely, the ideas of Reich, evidenced by the commodification of sex throughout marketing and communication, but one senses this is not the kind of liberation Reich and Makavejev sanctioned. Theirs is leagues freer, less pent-up, and aims to manifest itself personally and publicly, rather than through the minor prism of pop culture.

WR comes across as a deeply weird film, but this type of knee-jerk response seems to be precisely what Makavejev wants to shake out of us. The uncomfortable tension that brews in most of the scenes, even at their most delirious and brief, has been born out of a prudishness in society that stems from popular opinion, which inevitably leads to government. Society has suffocated the seemingly barbaric views of sexual freedom that WR presents, and has, as a result, suffocated the possibility of liberation from the straitjacket mannerisms we currently abide by. We get glimpses, both bizarre and touching, of how the world might look under Reichian theory: in therapy sessions, women scream ecstatically while being encouraged by a trainer to simply move their bodies in certain ways; a large room holds men and women alike engaging in ritualistic acts - stepping on each other's backs as if they were beds of hot coals - while they collectively moan and shriek; a young Slavic student of Reich, Milena (Milena Dravic), passionately leads her own lifestyle in an apartment complex. However, conflicting ideals populate the film, from the Communist "people's artist" Ivica Vidovic (Vladimir Ilyich) who is seduced by Milena to the archival footage of ancient Stalinist propaganda films that are frequently interspersed with the action.

Therefore, Makavejev's film becomes a flamboyant polemic triggered through a dialectical exercise, both structurally and ideologically. Like a Godardian essay, Makavejev's film makes no attempt at maintaining one cinematic technique, shuffling around between documentary and fiction and fantasy and reality. At the same time, Makavejev is less deliberately contemplative as Godard. His associative montage is sprawling and inchoate, distinctly lacking any sort of directorial intrusion, thus leaving the viewer to stitch together the kernels of information entirely on their own. Abnormally, the film's first thirty minutes focus with near dedication on a documentary about Reich complete with interviews of his family (one of which believes the American dream is dead and has given way to the production of young people who are taught to be "good citizens"), his supporters, and even anonymous people associated with his casual life, such as his barber. A female narrator guides us through this section, at one point posing an absurd set of questions regarding the prospect of humans having interstellar pasts simply to underline the "everything-goes" mindset of Reich, the necessity to never discredit irrationalities. Then, like the kaleidoscopic image of lovers having intercourse in a field, the film branches out in several different, loosely linked directions, as if to account for all of the distorted reflections in the honeycomb frame. 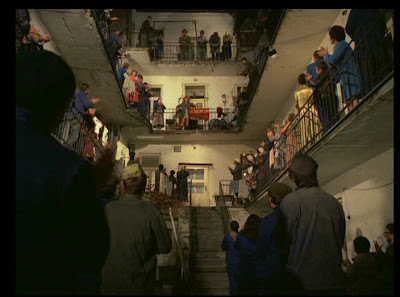 Hinting at a possible narrative, the melodrama of Milena is shown. She is a decidedly rebellious young woman, poised to live free from the handcuffs of stiff manners. Her roommate casually performs animalistic sex with her partner in the duo's oddly decorated apartment. Meanwhile, Milena thwarts off nagging attempts her buffoonish neighbor, Radmilovic, makes at seducing her. Eventually Ivica Vidovic catches her eye at one of his ice-skating shows, and she determinedly goes after him despite his unflinching view of masculinity, the emblem of Communism which contrasts sharply with Reich's theories: Vidovic believes that the fulfillment of sexual impulses will drain people of their natural desire to overcome the bourgeois. This shard of WR though, as much as it may sound like it, is anything but narratively conventional. The drama progresses abruptly and clumsily, most of it filled and obscured by absurdist detours, such as Radmilovic busting through Milena's wall and locking Ivica in a closet all while opposing banter clatters around on the soundtrack. Milena is no simplistic firebrand either; staged wittily as if a triumphant Party meeting, Milena epically sermonizes the tenants who line the corridors of the apartment complex about the need for sexual liberation. Such scenes are proof of Makavejev's ironic tongue, never sacrificing comedy for hard-nosed intellectualism.

To present a geographically distinct compliment to Milena's story, WR also delivers interludes of 16mm documentary footage focusing on zany characters in New York City, including a liberated transvestite and an artist who paints explicit sexual acts normally unexplored. Each comment on or differ slightly from Reich's theories, and, in heightening the possibilities of cerebral links, Makavejev piles on the references to commercial culture's view of sex, setting a long walk between the transvestite and his boyfriend to an uninterrupted radio program. Elsewhere, rambunctious circus and folk music accompany scenes of a hippy, Tuli Kupferberg, dressed in orange army clothes holding a toy rifle as he wanders the streets as if in the midst of a behind-enemy-lines mission. It all sounds so disparate in writing that one could hardly grasp how curiously this film succeeds in evoking the spirit of rebellion and connecting the thoughts of the orgasm and politics, but somehow through its playful assembly it works. And the finale - in which Milena is beheaded following intercourse with Ivica, her lone head, speaking on its own, subsequently dissolved into an image of Reich himself - gives us one final statement that explodes with multivalence.
Posted by Carson Lund at 10:20 AM