Snow Angels is my introduction to director David Gordon Green, but, given some general knowledge of his oeuvre, it is clear that the film is somewhat of a criterion by which to map out the rest of his career. Small-scale dramas with crisp dialogue and gently poetic undertones is definitely where Green excels, and is also the mode that his early features appear to operate under (George Washington (2000), All the Real Girls (2003), and Undertow (2004)). It's when other forces, namely Hollywood, begin encroaching on Green's comfort level that his films veer in a different direction (Pineapple Express (2008)), for better or worse. In Snow Angels, this dialectical push-pull of internal and external motivations frequently threatens to ruin the film altogether, but Green's undeniable adroitness with human drama manages to instill an undercurrent of lifelike emotion even when uncomfortable pacing and slightly artificial plotting emerges. One can sense Green juggling two sensibilities - low-key suburban drama and Hollywood melodrama - and this collision is often jarring. However, while these two frameworks do arguably bleed into each other for the entirety of the film, the stretches of time where each is emphasized is rather sharply divided.

In what can be considered to be the initial half of this dividing line, Green intimately observes the lives of a group of small-town Connecticut locals whose humdrum routines invariably intersect. Two estranged families are at the center of attention: there are the Marchands, with mother Annie (Kate Beckinsale) living in the family's house with the daughter of her and divorced husband Glenn (Sam Rockwell), a recovering alcoholic who stumbles around town trying to win Annie back; alternatively, there are the Parkinsons, who have another divorce issue, a familiar hurdle whose impact their son Arthur (Michael Angarano), a high-school student, fails to express. Arthur works as a dish-cleaner at the same Asian restaurant where Annie, his former babysitter, waitresses, and Annie is having an affair with the husband of another waitress at this restaurant who she considers a close friend. Green engineers this web of camaraderie and hostility with great nuance, casually drawing their links and respective personalities through protracted scenes of interaction. Working off of a novel by Stewart O'Nan, Green allows the dialogue to be informal and lucid, letting the sleek visuals substitute for literary description and thus masterfully outline these characters. As a result, there becomes a potent mosaic of indirectly communicated vibes, such as repressed sexual attraction between Annie and Arthur, and adamantly veiled longing that Annie has for Glenn.

A nonchalant fluidity in pacing also marks this section, which makes up approximately the first 45 minutes of Snow Angels. Green never lets the scenes last longer than they should, and the way in which the film cycles back and forth between Annie and Glenn, Arther's high school life and evolving romance with a new girl in school, the feud between the Parkinson parents, and Annie's relationship with the adulterous Nate Petite (Nicky Katt), is seamless. Often times they are shuffled together simultaneously to augment unseen tension; for instance, we see Annie and Nate in bed together, post-intercourse, in the home of Annie and Glenn, along with a montage of Glenn spending his much cherished time with their daughter, who consistently nags at her father about how she wants to see "mommy". Before this scene, Annie, while giving Glenn their daughter, mistakenly slips a line that makes Glenn suspicious of Annie's new relationship, saying that "we" do the chores as opposed to simply "I". Meanwhile, Glenn's earnest attempts at getting Annie to have dinner with him and his genuine love for their daughter make him a powerfully sympathetic character despite his bumbling naivete and foolish born-again outlook. Such scenes gain a complexity that never devalues the feeling of naturalism, of these events seeming completely realistic in the context of a snow-bitten suburb. 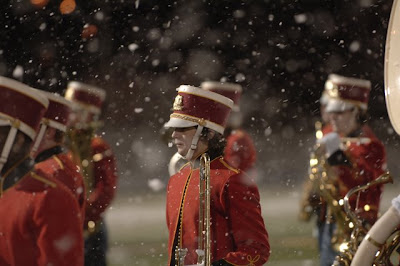 Despite this largely impressionistic, almost sedate flow, there is always an air of impending doom, as if the events are quietly accumulating into something terrible, and when tragedy finally does strike, while it does contain dramatic force, it ultimately changes the tone of the film. A few days after Annie and Glenn's daughter is officially labeled missing, Arthur and his friend head to the woods behind their school to smoke some marijuana and their discovery there, the young girl frozen beneath ice, launches the film into unrelentingly grim territory. Her death propels Annie into a severe existential crisis, Glenn into a drunken stupor, and the rest of the town into a cloud of gloom. At this point, Green starts playing Hollywood games, putting his characters through a series of miserabilist scenarios and subsequently observing their crises via supposedly introspective shots of them sitting alone staring out the window. The film loses out on its intimacy, preferring melodrama. Moreover, the onset of this tragedy clunks into the film abruptly, finishing as fast as it started, leaving us far from the end with some pacing deficiencies.

To be fair though, what the film loses from this episode, it evidently tries to regain by focusing acutely on the repercussions of the tragedy. Potentially humorous scenes of Glenn waltzing with drunken bar patrons or slurring during a pathetic speech about his lost love to Nate become deeply disturbing given the context of what's ensued. Annie questions her own life while Glenn perversely inquires about the nature of forgiveness, this being the point at which his born-again ideology has reached its apogee. In this light, one wonders how much of the denouement of Snow Angels is ostensibly "real" and how much is warped into Glenn's heavily skewered perception. If we're to embrace the latter, I find the film's final minutes to be extremely complex and rewarding, almost managing to negate the unevenness that comes before it. And while overwrought melodrama is clearly not what was meant to be in this film, Green still handles it better than most, presumably because he knows how to deal with the nuances of human behavior so well, evidenced by the beginning of the film. For instance, Arthur's relationship with the new girl, a nerdy photographer, is a solid, believable romance. The investigation into the death of Annie and Glenn's daughter is tensely emotional. Without these elements though, and perhaps without an overarching plot in general, Snow Angels could have been a sharper film, with dialogue as its main attraction.
Posted by Carson Lund at 11:42 AM