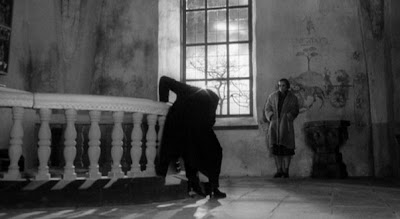 Last night after viewing Ingmar Bergman's second entry in a loss of faith trilogy, Winter Light, I pondered with my good friend about the wealth of Bergman's cinematic output. Our speculation was that no other prolific director in film history has delivered as many masterpieces as the rigorous Swedish artist. We also agreed that Winter Light was yet another to add to the extended list of greatness. Although I still find The Silence to be the most exquisite work of the trilogy, Winter Light stands as the one of the richest chamber dramas ever devised for the screen. Rivaling Dreyer's Ordet, which was released seven years earlier, Bergman's film is less interested in the ways in which God can interact with the living than the ways that His absence can cause abysmal psychological distress.

Tomas Ericsson, a sickened, droll pastor with an increasingly evident spiritual crisis, acts as the cowardly religious figure of a bleak, wintry Swedish town outlined by rapids. His communions are poorly attended and executed in a lackluster manner (the organist checks his watch periodically while playing, introducing an element of pitch-black comedy to an otherwise serious drama), and the ritualistic murmurs that Tomas recites are telegraphed with a noticeable decline in passion. After the conclusion of the mass that opens Winter Light (which is shot with a tenseness that could easily be absent from such a mundane scene), Tomas retreats indifferently to his vestry where he is confronted by the Persson's, the fisherman husband of whom is experiencing his own spiritual dilemma: a fear of a potential nuclear holocaust as a result of China's dawning of atom bombs. His pregnant wife Karin urges Tomas to speak privately with him to offer consolation. However, Tomas can only muster up a fearful soliloquy of his own accounts of God's silence. His attempt at easement fails miserably and results in Jonas' ensuing suicide, a catalyst for the hushed quandary between Tomas and his past schoolteacher mistress, Marta. Their relationship is not hushed in the sense that they do not speak to each other, but rather in that Tomas continuously swats away Marta's honest attempts at embrace. She, embodied perfectly by Bergman regular Ingrid Thulin, is a non-believer who suffers from masochism and Tomas' coldness. Gunnar Björnstrand, who plays the pastor, was actually very sick during his performance, adding a stark realism to his character.

This grittiness is apparent everywhere in the film, from Sven Nykvist's ascetic camerawork to the brisk weather that shields the communication between Tomas and the policemen after Jonas' (Max Von Sydow) suicide. Bergman's views are extremely pessimistic in comparison to Dreyer's; Tomas persistently questions God's presence and in the end, when it is suggested by the organist that God exists in love, Thulin's character stoops her melancholic head down to declare that she and Tomas cannot ever express true tenderness to one another. Bergman's lamenting of people's incapacity to communicate on a soul-to-soul level runs amok here, just as it does in all of his films. The denouement, however, is perhaps one of optimism: it is a necessity to continue communion no matter what state we are in, for it is always possible to reach out to a lone soul.
Posted by Carson Lund at 9:54 AM

probably my absolute favorite Bergman, and one of my all time favorites. the opening sequence for some reason has always stuck with me, as well as one of the only exterior scenes, in the snow going to see the body
Nykvist's cinematography is flawless once again

“Winter Light” by Ingmar Bergman (1962) is the second part of his “religious trilogy” (the first, “Through Glass Darkly” – 1960, and the third, “Silence” – 1962). In the first film, the basic (for achieving enlightened life) human abilities – to love without psychological defensiveness and to be vital without de-sublimation, that together as a sacred combination make human beings spiritual creatures, leave the existential circumstances of human life and retreat to “heavens”. In the third film of the trilogy “god” (the form in which the unity of human love and human vitality take place outside life) has “died” and human beings have to start from the beginning. But “Winter Light” depicts the situation when “god is silent”, and human beings slowly grow towards understanding that it is up to them to return their libidinous vitality back into the (earthly) life. In all of the films of trilogy Bergman’s points about spiritual life are mediated by the scrupulous psychological analysis of the characters.
“Winter light” is a metaphor of light of love/vitality in a condition of being distant from human life. The film depicts the Christian faith of seven characters – Pastor Tomas Ericsson and the six parishioners of his Church (three men and three women). Each protagonist‘s faith is uniquely created by their individual intelligence and will in the unique circumstances of each of their lives. Bergman approaches each character’s religious belief as sacred reality, as a precious creation. Some of the personages he personally admires, some he respects and others are objects of his “loyal criticism” that is full of empathy and good faith.
The frankness and gracious intensity with which the director depicts the human destinies and encounters between the characters are overwhelming, as much as actors’ performances make each individual soul radiate its own truth. Each personage is represented as having been formed by life and human history, nothing is fabricated in order to entertain or sentimentally please the audience. With all seriousness, the film is so congruent with human emotions that it is taken inside human soul as naturally as air for our lungs.
The film addresses Christians of various denominations, as much as people of other beliefs and non-believers with equal authority, and is an icon of not only a philosophical, but a humanistic cinema.
The film confirms that Bergman’s cinema is made for 21st century even more than it was for 20th century.
By Victor Enyutin