Wavelength (1967) A Film by Michael Snow 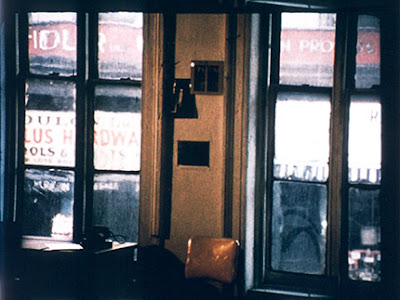 Michael Snow's cardinal avant-garde short Wavelength is a 45 minute zoom in on a photograph on a wall in a dank domestic space, interspersed with an occasional foray into a crime scene (or is it just a death?) that occurs immaterially inside of the room. This is no zoom in the conventional sense however; it's as if Snow hunted down the worst possible zoom lens, assembled it onto a grainy Super-8 film camera, and anchored it down precariously on a rickety tripod. His film begins on a wide shot of four tall windows in the back of a poorly lit interior and proceeds to hug and chug along sluggishly towards the middle panel of the wall, which after about 35 minutes, appears to hold a photograph. It is not until the final 5 minutes that it is evident what exists inside the photograph, yet there is still a grainy, indiscernible look to the image; there is no certainty as to whether it's an overhead view of calm waves, rigid rock formations, or the surface of the moon.

Perhaps this was Snow's intention, an ode to the zoom technique as a distorter of perspective. His films, often times meant more as statements than as fully realized pieces, are constant structuralist exercises. He works habitually with the long take, investigating one setting for an obnoxiously lengthy amount of time, frequently exhausting different means of camera movement: zooming, panning, tilting, or dollying like a kid who just received a film camera for Christmas. His heavily stylized work should not be written off as a haughty amateurism though. Wavelength is truly a transcendent, spooky experience. Throughout the camera's trip towards the wall, Snow trifles with the image psychedelically by adding mesmeric filtered flashes and subtle superimpositions. When a woman enters the room, first by shadow and then in physical form, and calls the police, she is flickered on the screen like a ghost, speaking nearly inaudibly to disorient the viewer from the bare story that unfolds. After about 15 minutes, the soundtrack settles into an intoxicating high-pitched whirring and never hints at stopping, until it finally terminates in the final minute, just in time to leave a nauseated viewer's ears ringing.

It seems that one of Snow's goals is to yank as many negative emotional responses from the audience as possible, such as fear, boredom, annoyance, comatose, and discomfort. It's likely that you'll want to punch someone by the end. Nonetheless, the experimental film is worth viewing because of it's critically groundbreaking nature and for its genuinely mysterious examination of a room. The image does not change, so its inevitable that you'll find yourself thinking "is that the same white bus that runs by the windows continuously?", "what exactly is that yellow blinking ball down on the street?", or finally "what exactly makes up this photograph I am staring at?". If you're interested, check out this radical 1960's avant-garde film here.
Posted by Carson Lund at 5:41 PM