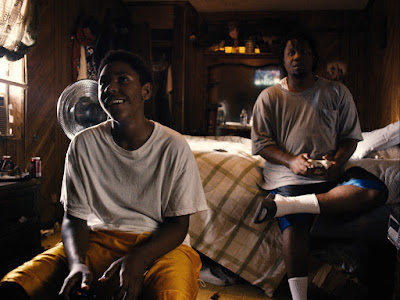 "Shot in 4:3 with sliver-thin depth of field and a lush palette of swampy greens, Amman Abbasi’s Dayveon is largely predicated on the idea of imparting a hyperreal sensuality to a region—an almost exclusively black small town in rural Arkansas—not often depicted on the big screen. The results, which sometimes conjure the spirit of Eugene Richards’s medium-format photojournalism in the Arkansas Delta in the late 1960s, are frequently breathtaking—and in no way trivial aestheticism. Small truths of the milieu, like the way leather peels off a sofa in the moist summer heart, or the smudgy details of a window in a 'hotboxed' Oldsmobile, become prominent pieces of mise-en-scène in Abbasi’s careful, patient framing, accumulating in a way that richly contextualizes the downtrodden lives of his characters."