Brimstone (2017) A Film by Martin Koolhoven 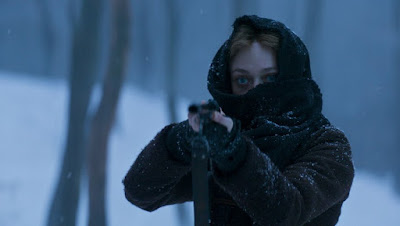 "Running 148 minutes and encompassing four chapters (portentously titled along biblical lines, such as 'Exodus' and 'Retribution'), the film returns over and over to scenes of frontierswomen being ruthlessly degraded by vile men; in a recurring scenario, Koolhoven frames the agonized faces of victims being dealt blood-drawing belt whippings. That Brimstone ultimately postures as a feminist yarn is unsurprising given the current market demand for Strong Female Leads, but its bid for social correctness—manifested most plainly in a last-minute uplifting voiceover—does nothing to make the film’s juvenile and numbing fixation on brutality any more palatable."