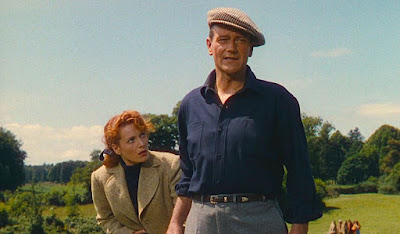 "This being a John Wayne role in a John Ford film, Sean never tips over fully to the dark side. But four years before The Searchers mined this very territory and became canonized for it, The Quiet Man derived much of its complexity from its flirtations with the murkier shades of its star's persona. Not only is Wayne's assimilated Yankee etched with a sense of privilege that touches on the nastier registers of American machismo, his shyness is pierced by a propensity for nonverbal bluntness, his initial social grace is later undermined by a pushiness in getting his way, and, most critically, his sterling physical form is recognized for its inclinations to violence. In a radically unorthodox gesture, Ford withholds any particulars regarding Sean's background as a boxer until a moment of tension with Will Danaher (Victor McLaglen), Mary Kate's brutish brother, that dislodges a fragmented sense memory detailing his accidental murder of an opponent in the ring."

Full review of the new Olive Films 4K blu-ray at Slant Magazine.
Posted by Carson Lund at 9:59 AM