Art of the Real 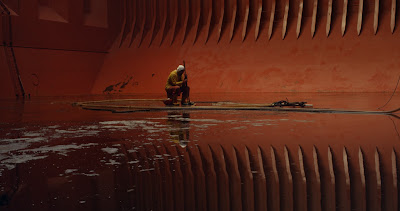 "For those still reeling from seasickness induced by Leviathan, Art of the Real has the tonic. Dead Slow Ahead, another experimental, largely nocturnal portrayal of industrial seafaring, moves with the lava-flow tempo suggested by its spot-on title, with director Mauro Herce's camera a seemingly high-tonnage contrast to Leviathan's plethora of featherweight recording devices. Panning, tilting, and dolly movements are sparse, usually occurring at paces almost imperceptible to the eye as they scan the musculature and intestinal corridors of a gargantuan cargo ship pushing through the Atlantic toward New Orleans like an undigested chunk of food exiting the body. An organism at once labyrinthine and blocky, it becomes the primary object of study for Herce, who appears only to reveal the human laborers on the vessel incidentally—and even then, as tiny instruments within the alien mechanics of the larger machine on which they toil."

That's an excerpt from one of my pieces this year on Film Society of Lincoln Center's Art of the Real series. I wrote two dispatches on the festival: one on festival highlight Dead Slow Ahead and Jose Luis Guerin's The Academy of Muses, and one on Ben Rivers' What Mean Something and Italian entry Il Solengo.
Posted by Carson Lund at 1:03 PM