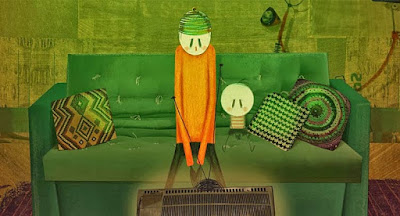 "In Alê Abreu's Boy and the World, the eponymous boy, a stick figure that otherwise appears to conform to the dictionary definition of a boy, is often seen moving laterally through a two-dimensional simulation of the modern world, the framing loose enough and the “camera” movement methodical enough to suggest a retro side-scroller. Like Jacques Tati's bumbling on-screen persona in films like Playtime and Mon Oncle, the boy, who materializes at the beginning of the movie in a blank white canvas that gradually gets crowded with obstacles, appears in combat with the mechanized workings of his environment throughout, dodging cargo bins dropped from cranes and leaping across architectural gaps like Super Mario in a less fanciful Mushroom Kingdom." Continued at Slant Magazine.
Posted by Carson Lund at 10:51 AM