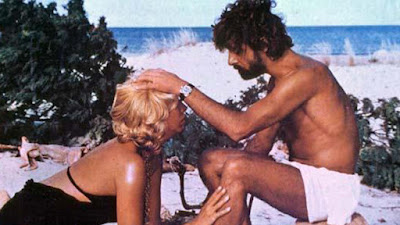 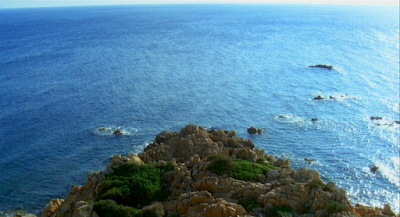 After a prelude aboard a ship full of Italian literati quarreling about politics somewhere in the gleaming Mediterranean, Swept Away takes the path not travelled by L’Avventura, imagining Antonioni’s narrative absence—the vanished beauty—as the focal point. Whatever ambiguities the earlier film left dangling with regard to the relative value of the privileged classes are swiftly bulldozed over by director Lina Wertmüller’s gambit of teaming up the materialistic heroine (Mariangela Melato’s Raffaella) with the working-class ruffian (Giancarlo Giannini’s Gennarino) tasked with manning her personal motorized rowboat—a trip intended as an easygoing afternoon sojourn that goes awry when they lose track of their home base. It’s a facile setup—capitalism and communism forced to collaborate!—that Wertmüller takes glee in probing from all sides, then picking apart until the central dichotomy evaporates and reveals sedimentary layers of power relationships. Right off the bat, Raffaella’s shrillness as a bourgeois caricature makes it easy to side with Gennarino’s barked indictments of her cultural ignorance, as well as to applaud his reflexive ability to enter survival mode against her preference for hysterics and constant cosmetic self-interest. But when the duo stations on an island, the rocky geography of which offers Wertmüller ample opportunity to encode power shifts as high-low spatial dynamics, Gennarino’s rhetoric and behavior abruptly veer toward the sadistically authoritarian—his perceived righteous vengeance for the accumulated sins of the upper-middle-class enacted on the Good People of Italy.

Swept Away’s action gets progressively thornier (Gennarino’s revenge fantasy goes unchecked, basically), and with it the angle of the film’s attack deepens. What begins as a takedown of materialism evolves into an expose on the horrific means and ends of masculine power, then a broader critique of the perils of having authority in general, then ultimately the deduction that the implicit codes of society itself are the greatest evil. As Gennarino wills Raffaella under a spell of carnal lust and the two arrive at a perverted but strangely effective co-dependence, Wertmüller’s implication is that the pair has devolved back to a nascent, animalistic state, composed in part of Adam and Eve’s spiritual purity and Neanderthalian barbarity. (A lengthy close-up of the impassioned lovers framed against the roaring glow of a fire in the background christens the mythical mood accordingly.) But even in this newfound harmony, Gennarino’s glaring misogyny persists, while Raffaella never gets a comparable chance to own any persona other than subservience. If Wertmüller’s recurrent staging of Gennarino looking down on Raffaella either mid-coitus or from atop a rocky perch are meant to taken ironically, there’s no leavening impression of Raffaella ever gaining agency as an individual (the closest the film gets to elevating her out of servility is the suggestion, wrung out in a series of high-angle shots of the characters wrestling in sand, that both characters have become equally debased).

In the uncivilized utopia that Swept Away posits as an alternative to the corrupted societal infrastructure, women still play second fiddle to men, a strange proposition coming from a female filmmaker but one that seems aligned to the more regressive extremes of the era’s radical politics. It’s possible that the final sequence—which finds Gennarino, now rescued and reunited with his wife, attempting to escape again with Raffaella only to be thwarted by her last-minute departure by helicopter—is meant as an indication of the victory of the female over the oppressiveness of the male (as well as an amusing comment on the luxuries of the capitalist, always able to just phone in expensive transportation to ascend above a situation literally and figuratively). But that reading is dissolved by Wertmüller’s decision to spend the last few minutes of the movie with the mopey and reproachful Gennarino, a misplacement of empathy that lands the final blow to this adroitly cynical but ultimately wrongheaded experiment in allegorical melodrama.