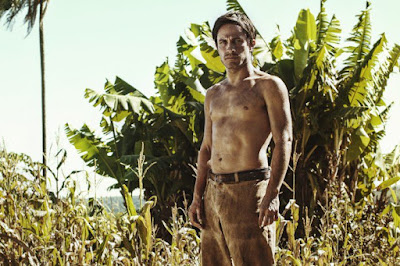 "Ardor's silliness is best crystallized by a scene midway through, when the taciturn rainforest dweller who's been helping a family of poor Argentine farmers ward off a band of pitiless gunmen manages miraculously to emerge alive from a dead-meat situation. Kaí (Gael García Bernal) is canoeing feverishly away from the bad guys, all of whom are heavily armed and seemingly hell-bent on terminating anyone brave enough to get in the way of their land seizure. Because of the indifferent lensing (the focal lengths are short enough that distance doesn't register) and preponderance of close-ups, it's not clear how far Kaí is from the shooters, but one suspects the space is condensed enough that landing a bullet in Kaí's head wouldn't be too much of a stretch of their professional abilities. Nonetheless, the men bafflingly elect to punch bullet holes in his oars instead, presumably for the sole reason of elongating the movie's build-up to its Leone-lite final duel." Full review at Slant.
Posted by Carson Lund at 11:51 AM