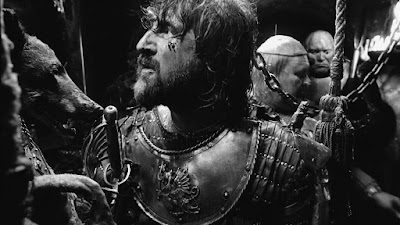 "'God, if you exist, stop me.' This is one of the half-conscious utterances made by Don Rumata (Leonid Yarmolnik) in the latter half of Aleksei German's Hard to Be a God as he contemplates a killing spree on the morally bankrupt planet of Arkanar. As a scientist originally sent from Earth to neutrally investigate the planet's Dark Ages because its crazed inhabitants have been snuffing out their few remaining intellectuals, he's been strictly advised against any kind of physical intervention, but that matters little at this point; nothing short of a divine occurrence could halt or delay his inexorable descent into madness. What's most haunting about the phrase—delivered, like all of the film's democratized dialogue, in a tremulous grumble that barely competes with the surrounding clamor of swaying chains and leaking orifices—is its sense of reflexive submission, the underlying implication being that when exposed long enough to a civilization cast off from common decency and deep in a moral void, the loss of reason and even sanity is a definite eventuality." Full review of Kino Lorber's new Blu-Ray here.
Posted by Carson Lund at 1:54 PM