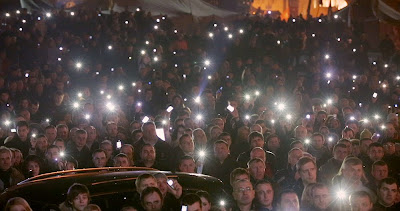 "It would be a mistake to overstate the similarities between the events presented in Sergei Loznitsa’s Maidan—a series of non-violent protests gone awry in Kiev, Ukraine, in 2013—and the ugliness this year in Ferguson, Mo., but you would have to be blind not to be struck by them...An ambitious, epoch-defining film on the still-in-many-ways-unfinished Ferguson tragedy has yet to arrive (though, given the proliferation of transmedia content during the fiasco, it wouldn’t be extreme to assume there was another Loznitsa out there in the crowd somewhere), but for Kiev, Maidan fills that role resoundingly." Full review here.
Posted by Carson Lund at 9:32 AM