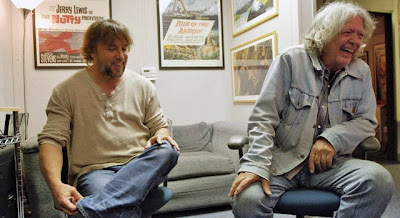 Back in my halcyon days of enjoying access not only to cable but to a premium package, I’d wander over to the Sundance Channel late at night to catch bits and pieces of the now-potentially-inoperative series Iconoclasts. The show, which had a pleasantly meandering rhythm to it, paired two celebrity personalities each episode (one generally an acknowledged visionary, the other a somewhat more utilitarian commodity ranging anywhere from a hack to a gifted craftsman/athlete/thinker) for otherwise unlikely sessions of mind-melding. Never beholden to any discernible narrative arc, one could safely miss parts or watch them in the incorrect order without losing too much vital information, and the tempo of a given episode always felt attuned to the flow of conversation rather than any predetermined schema. Ever since my entranced introduction to Slacker sometime in the early 2000s, that’s a quality I’ve found endlessly alluring about Richard Linklater’s cinema as well, so it seems only natural to find Linklater gabbing away in a film that shares much of what made Iconoclasts modestly successful: Gabe Klinger’s Double Play: James Benning and Richard Linklater.

Due as much to the nature of the film’s setup (Linklater invites James Benning to his Texas home, echoing 20 years earlier when he invited him as a decorated guest to his newly minted Austin Film Society) as to the personalities of the men involved (Linklater’s all eager curiosity, while Benning’s low murmur and careful word choice suggest a hermit), there’s a loose sense in which Benning’s the “genius” here and Linklater’s the scrupulous pupil. The movie flirts knowingly with a gaping critical over-simplification: Benning, ever the economical lone wolf, represents a zenith of pre-narrative “pure” cinema untouchable by Linklater, the naïvely movie-mad indie prodigy who signed off his avant-garde tendencies to the Hollywood machine somewhere along the line and is thus ideologically constrained by Benning’s arch-enemy of narrative language. Klinger establishes this false impression by playing up the filmmakers’ aesthetic distinctions in his montage, juxtaposing, for instance, Linklater’s more rambunctious sequences (say, the disproportionately effusive send-off of Slacker) with Benning’s unflappably even-tempered long takes. But Double Play is first and foremost a film made with humility and affection, and it ultimately goes about confidently deconstructing such judgmental dead-ends.

Time, that constant that haunts the work of both directors, is the most salient equalizer on display. Both men look comfortably scraggly and out of shape, their demeanors softening along with their drooping features (on-camera appearances from Benning and Linklater’s 90s selves reveal a brooding artiste and a winsome loafer, respectively, both of which play like more self-conscious versions of their personas as captured by Klinger). This acknowledgment of the physical and psychological effects of time’s passing—Klinger’s editing frequently serves to visually reinforce his subjects’ recollections—obviously dovetails with the major thematic preoccupations of Linklater’s best work, even touching upon the more poetic dimensions of this theme in Benning’s elegiac actualités. It also carries with it a charge specific to Klinger’s film that works itself out through discussion: theoretical divisions fall away with time, leaving in their wake more general appreciations of visual art and the creative process. 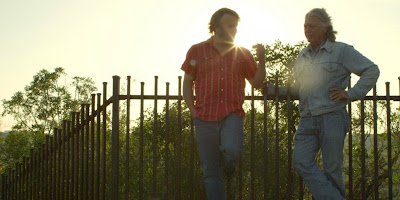 The conversations shared here—volleyed back and forth in parking lots, basketball courts and editing rooms, over lunch and over the Texas countryside—are marked by a relaxed sense of chivalry. Linklater showers Benning with the compliment that his films allow him special time for nature observation. Benning singles out moments from Linklater’s films—the credit sequence of School of Rock, the baseball touches throughout his filmography—as windows to his friend’s directorial personality. A solitary aesthete whose films show in museum archives rather than arthouse theaters, Benning lacks the voracious cinephilia advertised all over the walls of Linklater’s home, so he enjoys Linklater’s narrative films from a curious, anthropological frame of mind (nowhere more evident than in a moment when he views rough edits of Boyhood and expresses genuine curiosity with regards to how Linklater might assemble the ellipses) rather than an academic, referential one—which is precisely the state of tabula rasa awe that Linklater confesses to feeling in the presence of a Benning film. The two may poke at each other (Benning’s comment about the manipulative nature of modern crosscutting seems at least partially an attempt to provoke his lunch companion, and the same goes for Linklater’s retort that slow cinema is inherently just as manipulated) but ultimately they are pacifists recognizing the fact that they are at similar junctures in life and relishing an opportunity to share their feelings and memories with one another.

Klinger’s placid, unhurried construction moves at the pace of his subjects’ lazy hangout, but that’s not to say it lacks autonomy. Starting with the reunion of his subjects and concluding with Benning's departure from Linklater's home, the film plays out roughly as a linear sequence of events, albeit one punctuated by unexpected and often surprisingly lengthy detours into the past. Sometimes, Klinger splices film clips from the directors' bodies of work to merely accent discussions or actions occurring in the present, such as in a stirring moment when shots of the two men shooting hoops segues—continuity of motion intact—into a clip of a younger Linklater doing the same thing alongside an anonymous friend in his 1988 debut It's Impossible to Learn to Plow by Reading Books. Other times the film clips last so long they transcend the usual function of documentary B-roll, taking on a presence beyond mere punctuation or exposition. After Benning describes the impetus for Stemple Pass (2012), for example, Klinger lingers on an excerpt of the film for over a minute; on the surface, this would seem redundant, but here we're invited to consider the parallels and/or gaps between verbal explanation and artistic creation. Klinger's patient montage achieves a sense of flattened time: all of Linklater and Benning's cumulative six decades of work is prone to being called upon and scrutinized at a moment's notice assuming it pertains to a concept, memory, or idea demonstrated in conversation. The standard hierarchies of past and present/primary and secondary sources that implicitly guide so much documentary filmmaking are broken down. 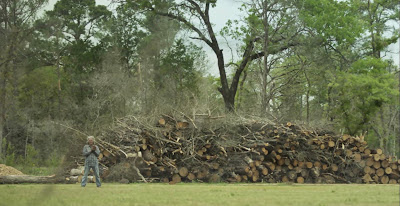 A moment of candor: I’ll admit that my immediate, easy affection for Double Play probably stems partly from the fact that Linklater and Benning’s life trajectories echo my own, albeit in more dramatic (and certainly more successful) fashion. My discovery years ago after falling in love with Linklater’s early films that he himself was a once-promising, ultimately abortive baseball player had the convenient effect of self-justifying my own departure from the sport in favor of filmmaking/film connoisseurship and explaining what I felt as a spiritual affinity with Linklater’s cinematic world. So naturally there’s a multiplication of effect for me when I watch the two filmmakers partaking in the eternal pleasure of playing catch while discussing cinema. And as a former memorabilia collector, the repeated use of clips from Benning’s pre-minimalist era experimental film American Dreams: Lost and Found (1984)—which sets vintage Hank Aaron baseball cards against a backbeat of late 20th century American ephemera, both aural and textual—lends an added charm. The deliberate, thoughtful drama of baseball shares a loose affinity with the patience and care put into Linklater and Benning’s films, a notion made especially clear during the pair’s laidback batting practice session, composed so as to isolate the batter and outfielder in separate frames but flattened with a telephoto lens—a long-distance shot-reverse-shot pattern that collapses the space between them.

Double Play’s visuals repeatedly stress this quest for connection and understanding. During one key scene, Klinger’s camera frames his subjects in intimate profile—sideways glances, as opposed to direct eye-line views, are used frequently and stress the director’s perspective as a separate (but still important) third wheel in the comprehension process—and pans into the negative space between the two men. Metaphorically speaking, it’s this space—the air in which the baseball travels back and forth—that Klinger’s film is exploring. What kind of synergy can occur between two artists who work in the same medium but in disparate modes? From what recesses of imagination and theory do the moments of crossover in Linklater and Benning's films emerge? Double Play is not particularly concerned with providing resolution to these conversational touch points, but it does create a tantalizing reflective space for the engaged viewer that could feasibly extend far longer than the 70 brisk minutes assembled here by Klinger.