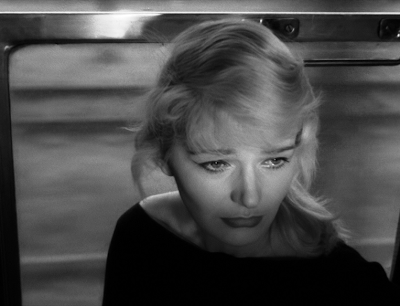 Night Train (1959): Director Jerzy Kawalerowicz – an unfamiliar name to me prior to seeing this – waits until his final shot to deliver a clarifying horizontal dolly shot view of the film's titular setting, up until then a boxy, spatially confusing labyrinth rife with visual obstructions (sliding doors, bunk beds, tiny cabin windows, curtains). Shooting in 4:3, he busies his shots with layers of information tunneling toward the center of frame, faces stacked up against one another in competition for the viewer's focus. This visual strategy muddies the surface intrigue of the film's mystery-romance plot, which, like in Antonioni, gradually withers away. There's at least four characters who at one point or another seem to be the primary subject of interest, and four or five shots in the final twenty minutes that only appear to be capping off the film. Claustrophobia, irresolution and distraction are thus suffused into Night Train's nervous silence, which makes the sudden escape from the train into an open landscape late in the movie such a liberating sigh of relief. But even this hint of release, a resolution to the murder mystery plot, proves only temporarily cathartic. Greater existential loose ends still await the characters before their final, lonely trips off frame. Overall, this is a fairly discomfiting guide to what it must have felt like to live in the haunted stillness of Poland post-WWII.

Beeswax (2009): I'll need to revisit Mutual Appreciation and Funny Ha Ha pronto, because my feelings on Bujalski have radically changed for the better after experiencing Computer Chess and now Beeswax. I'm hard-pressed to think of an American filmmaker (off the top of my head, maybe Katz and Baumbach land in the same echelon) who better understands the vernacular and verbal rhythms of contemporary middle-class, educated, independent-minded white people in their 20s and 30s—that is, the language as it's lived and spoken. In this regard, Beeswax is riveting on the level of uncanny recognition alone; I feel as though I've met every character in this film. The moment-to-moment reactions, advances, innuendos, pauses, and compromises are perfectly judged and performed by Bujalski's band of non-actors (excepting Alex Karpovsky, who does a more pronounced, less engaging variation on this semi-clever sensitive guy in Girls). No one's particularly thrilling to watch, and Bujalski certainly doesn't build any kind of high-stakes plot around them, but together their interactions take on a humbling dramatic momentum wherein every minor decision is inflected with the weight of the preceding moments. That's how Bujalski is able to end on an action as seemingly insignificant as a character shutting the door in the corner of the frame and inscribe it with such pathos.

Wise Blood (1979): Like the best Flannery O'Connor stories, the diagrammatic nature of the script for John Huston's version of Wise Blood is gradually complicated, and the final result is far more flexible than the sum of the often rigid parts. The film deals heavily in contrasts: a sour, old-fashioned atheist allergic to pleasure and an undiscriminating whore disguised as a puritanical Catholic girl; two shamelessly opportunistic salesman-preachers, one true to the illusion that he's faithful and the other unafraid to revel in his materialistic impulses; a gung-ho street-dweller boy hungry for meaning and a crooked entertainer dressed in a gorilla suit. There's also the old city/country dichotomy, but Huston keeps twisting and turning these frameworks, aided in no small part by the weirdness of the movie's Macon, Georgia and the bottled-up madness of Brad Dourif's performance. The film's bleak final movement feels like a precursor to that of Leigh's Naked: a social outcast faced with a choice between a matriarchal domestic arrangement and absolute vagabondage, one determined to produce restless dormancy and the other likely to result in an eternal lack of fulfillment, if not death. Wise Blood's last shot blends both outcomes, showing such a person to be truly damned either way. Are they not for this world, or is this world not for them?

The Kremlin Letter (1970): The showy casting of Huston's talky Cold War espionage thriller – spanning stars/cultural figureheads of different nationalities, backgrounds, niches, specialties, and acting styles – may have emerged as an effort to give audiences some semblance of familiarity in a murky world of double (and sometimes triple)-edged political maneuvering, illicit financial transactions, routine world traveling, and a knotty vernacular predicated on official lingo and double entendres. But if facilitating comprehension was what Huston and his producers intended, they failed. The mutual presences of Orson Welles, George Sanders, Richard Boone, Max Von Sydow, Patrick O'Neal, Bibi Andersson, and Huston himself only produces cognitive dissonance; by the time one has mentally reconciled the idea of a multi-talented American heavyweight and a soulful Bergman muse occupying the same frame, an entire chunk of plot has passed between their lips. (The movie's tagline is "If you miss the first five minutes, you miss...the key to the plot" (ed.), and though that's not false advertising, the same could be said of any five-minute stretch.) Alas, while The Kremlin Letter defies moment-to-moment understanding, its overarching air of grim fatalism is unmistakable; to this end, Huston's mise-en-scène, a tactful blend of low-key lighting and suggestive choreography between camera and performers (plenty of two-shots of people looking away from one another), is commanding. 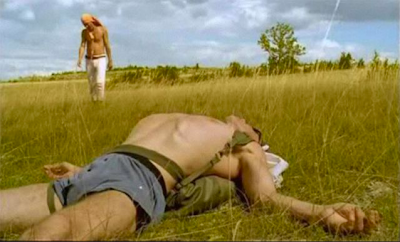 Stranger by the Lake (2013) and Sunshine for the Scoundrels (2001): Caught up with both of these at the tail end of Harvard's Guiraudie retrospective and felt foolish for missing the first half of the program. I saw Stranger by the Lake once before at NYFF and spoke about some preliminary thoughts here, but I know now that my snap consensus (solid but unremarkable slow-burn arthouse thriller, typically exemplary on a technical level) was insufficient. This time around I was more taken with Guiraudie's achievement, and I scribbled down a bunch of terse notes about patterns and variations (most of which are useless to me now) in an attempt to wrap my head around the brilliance of the film's airtight design. The earlier short – an ambling interpersonal chat-fest that distinguishes itself by being set in a desert and punctured by cartoonish characters and plot quirks – is a curious little work that makes one yearn for appropriate predecessors (Beckett? Godard? Rivette? Rohmer?) even as it carves its own thoroughly idiosyncratic bubble. It goes without saying, but both need to be watched again.

Non-Stop: By aligning the audience with a paranoid protagonist from the get-go (even going so far as to saddle that protagonist with the consuming American anxiety of the Muslim-looking, only to undermine that anxiety later in revealing that Muslim as the selfless doctor aboard the flight), Non-Stop flirts with an ambitious thesis regarding the largely illusory nature of terror in the contemporary world, the idea that fear begets fear and grows exponentially. A disappointing third act reveal puts a concrete face (two, actually) to the terror and ultimately stuffs a good-bad dichotomy into what is initially a very grey ecosystem, but, prior to that, director Jaume Collet-Serra cleverly orchestrates a parade of red herrings within the cultural melting pot of a compromised red eye flight. Several actors, particularly Julianne Moore (who I'm still not convinced is innocent; Non-Stop 2 might have something to say about that), do terrific, darting work with their eyes, lending credence to the escalating belligerence of Liam Neeson's police work. Another key element is the arrangement of the aircraft, which Collet-Serra subtly emphasizes; the positioning of certain characters relative to Neeson provides much of the suspense, and the swish-panning shallow focus camerawork – often pivoting around the man's head – makes sure to catch blink-and-you-miss-it glimpses of suspicious activity in the background. Ho'Wood watering-down notwithstanding, Non-Stop leaves numerous thorny implications that suggest greater fears than the two post-collegiate tools that spoil everyone's vacation—namely, its disquieting impressions of the totalitarian efficiency of technological info-transfer, the media's lack of suspicion at the hands of visual data, and the resulting mob mentality that surrounds it.

Climates (2006): Three 30-minute chunks, three climates, three (slightly) different emotional registers, three different ways of displacing existential frustration on women. I've long swooned over the photographic eye of Nuri Bilge Ceylan, but the man's notion of narrative structure could use some loosening, at least on the evidence of his first three features (I haven't seen Anatolia yet, but I expect it to change course). Climates is the worst offender in this regard. In the service of a pretty passé thesis – true connection is an impossibility – Ceylan expends high levels of directorial finesse weighing every scene down with gloomy dead air; in one particular long take in the back of a bus, he controls the background action for dramatic effect to a scientific degree. The compositions are perfect, the atmosphere sounds are enveloping, the temporally destabilizing cuts are beautifully timed, and the money shots – always revealing characters to be more alienated from one another than initially expected in a given moment – never fail to elicit the desired emotions (mostly sadness, dejection, pity). But a suspicion that Climates has little more to offer than stern masculine navel-gazing steadily arises. Ceylan himself plays the lead (formidably, I should add), and the film's occasional self-reflexive gestures suggest that the director may be coasting on fumes of personal romantic disappointment; fair enough, but it all starts to reflect quite badly on him when one considers the clinically staged, beginning-to-end dominant/submissive sex centerpiece.

Gummo (1997) and Trash Humpers (2009): "What, are you guys watching Gummo?" is what a friend of mine years ago would sarcastically remark every time he'd barge into my childhood basement/neighborhood hangout zone while I was watching a film. The joke was that I was never watching Gummo, even as it so obviously exemplified the kind of hipster film-snobbery of which he (probably rightly) assumed I was guilty. Anyway, such assumptions were part of the reason I never mustered up the energy to wade through the film's annoying cultish reputation en route to the goods. And, coming around to it now for the first time, I think they are goods. To engage with Korine's proudly anarchist cinema, one has to first meet him on his turf—that is, the domain of smart-ass skate videos and public pranksterism that was presumably so integral to his youth. Roll with that stuff – certainly the pushiest, most divisive aspect of his work even though I see it as mostly innocent – and you'll open yourself up to what is ultimately a curious, restless vision, the unchecked imagination of a guy with a colorful take on the mythology of the South that yields passages of transcendent oddness. Gummo's crowning moment is a haunting scene of haphazard euthanizing in a shadowy basement so littered with junk it suggests a subterranean jungle. That moment taps into a mesmerizing garbage-strewn exoticism – an anthropological feeling of dipping into a completely alien existence that is nonetheless undeniably part of our world – that Trash Humpers more or less coasts on in its bedraggled VHS haze. Seeing both films in close proximity to a very big screen surely enhanced the extraordinary force of their hallucinations; I'll probably have to report back after less visceral encounters.