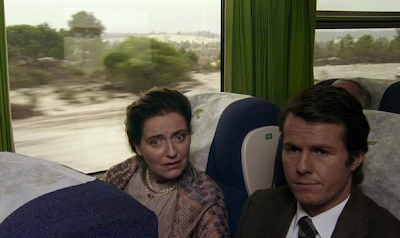 Eccentricities of a Blonde-Haired Girl (2009): The above image gets at all that's so gently beguiling about Manoel de Oliveira's recent films. It shows a man relaying a tale of thwarted romance to a female stranger on a moving train, and it's the framing device that houses Eccentricities of a Blonde-Haired Girl's narrative proper. But what are the characters looking at? And why is the camera placed in this strange location, perched above them so they look like they're transfixed by the tripod legs? Also, why do they never make eye contact? What seems a familiar setup is rendered subtly off through its presentation, a trait I'd use to describe the film as a whole. A straightforward narrative of old-fashioned courtship is observed: the man on the train becomes infatuated with a young girl in a window across the courtyard from his office, tracks her down, professes his love, has his request to marry turned down by his employer uncle, performs an odd job to become financially independent, returns to his object of affection, discovers a character flaw, and angrily casts her off. It's a simple morality tale, or so it seems, but the devil's in the details: the low-decibel but niftily selective sound design of urban Lisbon, telling gestures and bodily positions such as the girl's sudden foot kick or final shoulder slouch, and, again, Oliveira's funky deep-focus framing. I see the critique of female objectification excavated by the film's admirers (Glenn Heath Jr. astutely offers such a reading here), but at the same time I'm not convinced this is quite that cut-and-dry. There's something more in the way this movie moves that I need another look to put a finger on.

Mon Oncle Antoine (1971): Canadian filmmaker Claude Jutra's most well-known film Mon Oncle Antoine has the narrative directness and emotional clarity of a Robert Frost poem. It tells of a little boy gradually opening his eyes to responsibility, sex and death in a small Quebec mining town riddled with working-class outrage at the mandates of a mostly offscreen conservative government. With the exception of a slow-moving first act, which divides its dramatic emphasis in puzzling ways, Jutra centers his focus on this boy (Jacques Gagnon, whose eyes have a Bergmanesque opacity). The film's perspective skews gently towards his sense of dazed discovery, allowing Jutra's naturalistic rendering of the community to come across all the more authentic, never scrutinized or falsely dramatized. A final act involving the botched retrieval of a corpse in a heavy snowfall is the film's real achievement, its best showcase for Jutra's ability to uncover great nuance without any tendency toward overstatement, stylistic or performance-based.

Gremlins (1984): A movie theater nearly overflowing with cackling villains, hysterically absorbed in the screen. A man and a woman conspiring against them in the shadowy alcoves of the theater. A murderous plot involving flammable material and a match. A smoking, flaming screen and its eventual tearing down. Sound a lot like the climax of Quentin Tarantino's Inglourious Basterds? Sure, but it's also the same template for the climax of Joe Dante's hilarious and stylistically muscular sci-fi holiday film Gremlins. Thus, American cinema's most conspicuous thief pays explicit homage to a no less reverential but far subtler American genre craftsman. Tarantino's steal was inspired; Dante's invention was brilliant. In Gremlins, a boy must put an end to the multiplying effects of his hasty consumerism. The resulting destruction is tied to the act of cinematic spectatorship. Can there be such thing as an active, productive viewer/consumer? It's a question also asked by Inglourious Basterds.

Taken (2008): Like Pierre Morel's District B13 (another Luc Besson production), Taken is first and foremost a showcase for its central performer. But Liam Neeson's strengths are of a different tack than those of the gymnastic David Belle. He's sharp, quick-thinking, internally composed but always on the move, relentless and lethal but nowhere near as athletic as Belle. Taken, then, is a ruthless and single-minded revenge movie that aligns perfectly with Neeson's abilities. Morel's terrible at drama – that much is clear from Taken's bookends (boneheaded attempts at father-daughter bonding), or the entirety of District B13 for that matter – but he's a whiz when it comes to frenetic pacing, dogged pursuits, swift fight sequences, and pulsating testosterone. Thus, sixty minutes of Taken have a breakneck, lupine energy, culminating with a moment of Liam Neeson driving a hijacked car along the Seine that's near-transcendent. Whatever grave extra-diegetic implications exist in its female trafficking plot are neutralized by Morel's termitic filmmaking, prioritizing one hard beat at a time. 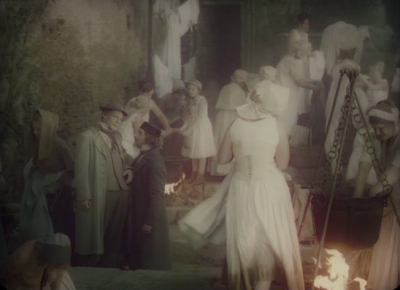 Taurus (2001): I had the unfavorable, and frankly inexcusable, misfortune of seeing this on a shockingly atrocious digital transfer in a theater, and not just a run-of-the-mill indie cinema but a...wait for it...actual cultural institution known as the Museum of Fine Arts Boston. When, citing the digital artifacts and near-YouTube quality, I prompted an employee to explain to me the logic of charging money to display a .mov file that should never have even been within shouting distance of a projection room, I received a pithy "it was what the company gave us." Leaving aside the mystery of whether or not the staff even bothered to test the film prior to scheduling it, the bigger issue here is one of standards and general cultural responsibility, the apparently unreasonable assumption being that a museum should be honoring their exhibited mediums with the utmost fidelity. Anyway, it's an even greater shame because Taurus strikes me as one of Alexander Sokurov's best films, and certainly the only one I feel like I've ever had a fairly solid grasp on after a single viewing.

Like the final reel of Citizen Kane elongated into one long, slow yawn interrupted involuntarily by hiccups and grumbles, this two-part dirge watches from its stoned perspective as Lenin completes the transition from once-relevant political figure to stumbling icon of obsolescence in his family's foggy country estate. Sokurov's 4:3 frames, slapped with a vignette of murkiness (or, again, was it just the residue of the transfer?) and lit with a diffuse brown aura, embody the shrinking and decay of Lenin's senile mind and crippled body. Comparisons between Sokurov and his Russian antecedent Tarkovsky have always felt a little superficial to me, as though the mere fact that the two filmmakers trade in vaguely similar visual languages, draw upon similar artistic influences, and come from the same country implies deeper connections, but here the surface parallels are hard to ignore (fog-enshrouded fields and slow tracking shots behind trees are plentiful, and one scene features Lenin and his wife chatting while lying in tall grass). But here, as usual, Sokurov's typically lowly body humor and rambling dramatic structure is after a far more earthbound truth than those pursued by Tarkovsky—specifically, that those having lost power can only exist delusively in the dark waters of their own past, a perceived legacy outweighing the value of the present moment.

Faust (2011): Two weeks removed from this screening and its majestic oddness still eludes me. If Taurus is Sokurov's most straightforward film, Faust is at the opposite end of the spectrum, a slippery concoction whose visuals – alternating between show-stopping moments of clarity traceable to iconic European paintings and inebriated, claustrophobic trudges in soft-focus through damp, dark interiors – seem beamed from another world. My desire to return to the film's revelatory atmosphere of booze, mud, guts, flatulence, and philosophy has been great, but now it looks like my big-screen opportunities have dwindled, which is OK with me; several passages of it have the uncanny, unfinished mystery of the most haunting folk tales (and not just because the movie's based on a folk tale), the kinds whose images never quite leave the brain even through long droughts of contact. At this point, I'm just vomiting baffled reverential nonsense, so I might as well just add more to the pile: Alexander Sokurov is a visionary.

The Color Wheel (2011): Mostly everything about The Color Wheel's climactic post-grad party – the rudeness of JR's old high school peers, her spectacularly awkward dodging of employment-focused conversation, the increasingly macho gang-up on Colin, the superficiality of one girl who's both JR's arch-enemy and Colin's longtime crush – is dug into a bit too hard by Alex Ross Perry, a sudden pivot into subjective fantasy designed to almost legitimize the brother-sister duo's terminal mean-spiritedness up to this point. It nearly throws the film off its rails, but the subsequent 10-minute pillow chat between JR and Colin makes everything right again, in addition to radically deepening the film's emotional landscape. The Color Wheel is pretty much virtuosic in its wall-to-wall chatter; the words are progressively meaningless so as to avoid any possible dead air that might force inner confrontation. In this particular centerpiece, JR's dialogue is entirely superfluous, and when it comes to a sudden halt, the film unleashes a shockwave of emotional comprehension hitherto stifled beneath a facade. Generic acoustic-strummed driving scenes and some awfully broad gags do nothing to suggest the challenging places Perry's film ultimately goes.