Now that my formal coverage of the 51st New York Film Festival has concluded (see my dispatches here, here, and here, and also take a listen to my appearance on Peter Labuza's Cinephiliacs podcast), I wanted to post about some of the stray thoughts that have stuck around in my head since leaving the event. The following are descriptions of scenes, moments, and sensations that stood out in one way or another from the sensory overload that constitutes a film festival. I wish I could provide corresponding images for all of these snippets, but unfortunately press images are limited for these films at this point in time. These are by no means comprehensive in their discussion of the films (check my actual coverage for that); instead, they offer a record of fleeting impressions. 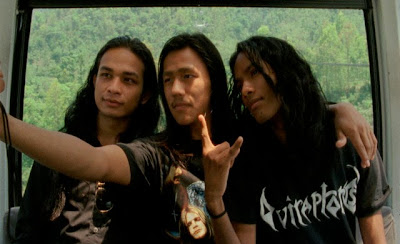 One of the feats of Manakamana is in democratizing the frame; despite the film’s self-imposed limitations, one has the desire to look at one thing and everything simultaneously. Do I look at the contours of the elderly woman’s skin or the lush vegetation passing by outside, the goat ass staring me in the face or the texture of the steel encasing the animal? You’d think that after two hours spent on one cable car service, a fairly comprehensive familiarity with the film’s location would be inevitable, and to a certain extent, one of the film’s pleasures is developing an awareness of the tangible particulars of its rhythm to such an extent that it’s possible to know what’s coming next, a relative certainty that contrasts the genuine unpredictability of the human subjects. But even this supposed stability is tested; at one point, during an uphill ride with three young punk rockers, one of the guys points out a small gathering halfway up the mountain, just in time for the bottom left corner of the frame to catch a brief glimpse of a group of gung-ho visitors that I had missed every other cycle prior. What was previously an undifferentiated mass of sun-baked greenery becomes, for this short moment, alive with other signs of life – just one example of the way in which the film allows for miniature discoveries even within such seeming redundancy.

There’s an acute, non-specific desire for escape that permeates the characters in Lav Diaz’s Norte, The End of History, a feeling of existential restlessness that imprisons them both literally (scenes at a country jail are interspersed throughout) and figuratively (repressed secrets that cumulatively crack sanity). Diaz’s widescreen compositions – some of the most commanding, painterly images of the festival – are alternately liberating and restricting, creating vast expanses through different dimensional planes while also keeping boundary markers (walls, patches of trees, roads) ever-present. About 100 minutes into this 4-hour Greek-sized epic (and twice after with less impact), when the sheer burden of the present has become nearly unbearable for these people, something wondrous and unexpected happens: the camera, now in desaturated DV haze, departs from the ground entirely, taking on the floating perspective often used in football broadcasts to survey the dilapidated villages and untouched marshland in which the story is set. The remote-controlled Helicam technology is a bit janky, if not deliberately operated to embrace messiness, so the vision has a jittery, handmade quality as if to suggest one of the characters actually learning to fly. It’s a moment of release both formal and thematic, from the static weight of Diaz’s preferred long-take style, from the high-fidelity gloss of the film’s visuals, and from the drudgery of solitude and labor that defines the narrative – a dream of escape, not only for the characters, but also a momentary instance of flight for the viewer out of this heavy, intoxicating work.

Even in his lesser works, Hayao Miyazaki’s animation is defined by a Felliniesque appreciation for and expression of the fullness of life; the glorious diversity of emotions and experiences, usually depicted at their most passionate and intense. I was disappointed with The Wind Rises on the whole, but there’s still no shortage of these moments. Miyazaki’s skill with such expression is so strong that it often transcends some of his storytelling deficiencies, as in the case of a particularly tender detail in the latter stages of a haphazardly developed relationship between the film’s main character and his dying wife. Their time together is dwindling, and Miyazaki does everything in his power to elevate feelings of deep, consuming affection, most beautifully in a moment when the two are lying in bed. Tight close-ups of their faces are embellished by almost embarrassingly intimate sound effects (the smack of a lip, the soft hum of breathing), and when the two finally settle into their respective positions, Miyazaki offers a poignant wide shot from just beyond the shōji. It’s a predictable cap to the scene, but what’s unanticipated is the addition of several extra beats before the cut, a long, silent pillow on the tail end of the shot that recalls Ozu or Bresson. This subtle editorial decision just barely interrupts the ostensibly natural flow of the drama, standing out as an emotional epiphany existing not for but above the narrative.

“What exactly am I looking at, and from what angle?” This is a fundamental question aroused by the cinema of Nathaniel Dorsky, a pleasant confusion that, when pondered over and over, adds up to a radical reorientation of the visual world. Spring, one of the films in Dorsky’s latest lyrical couplet, offers an extended shot that not only begs this query but also sets off other levels of discovery. The composition is of an architectural structure composed of a succession of golden circles that meet at a central point, shot from a head-on angle to visually suggest a tunnel. Is it part of a church ceiling? An intestine-like space shuttle interior, perhaps? Dorsky holds the shot for the audience to mull over. Then a ripple grows from the bottom of the frame, slowly revealing itself as a water surface. Are we in the midst of a molasses-like dissolve from this baroque structure to a shot of rippling lake surface? No, a longer exposure to this image brings the perception-shattering realization that we’re looking at only one half of this autumnal industrial form, the illusory other half reflected in the water as in Bill Viola’s famous video piece The Reflecting Pool (2010). It’s an awareness that also clarifies the identity of the form being photographed, making it clear that it’s a tunnel running parallel with the ground and not some floating cylindrical oddity. Cuts, compositions, physical objects, inner frame movement – they’re all red herrings in Dorsky’s work.